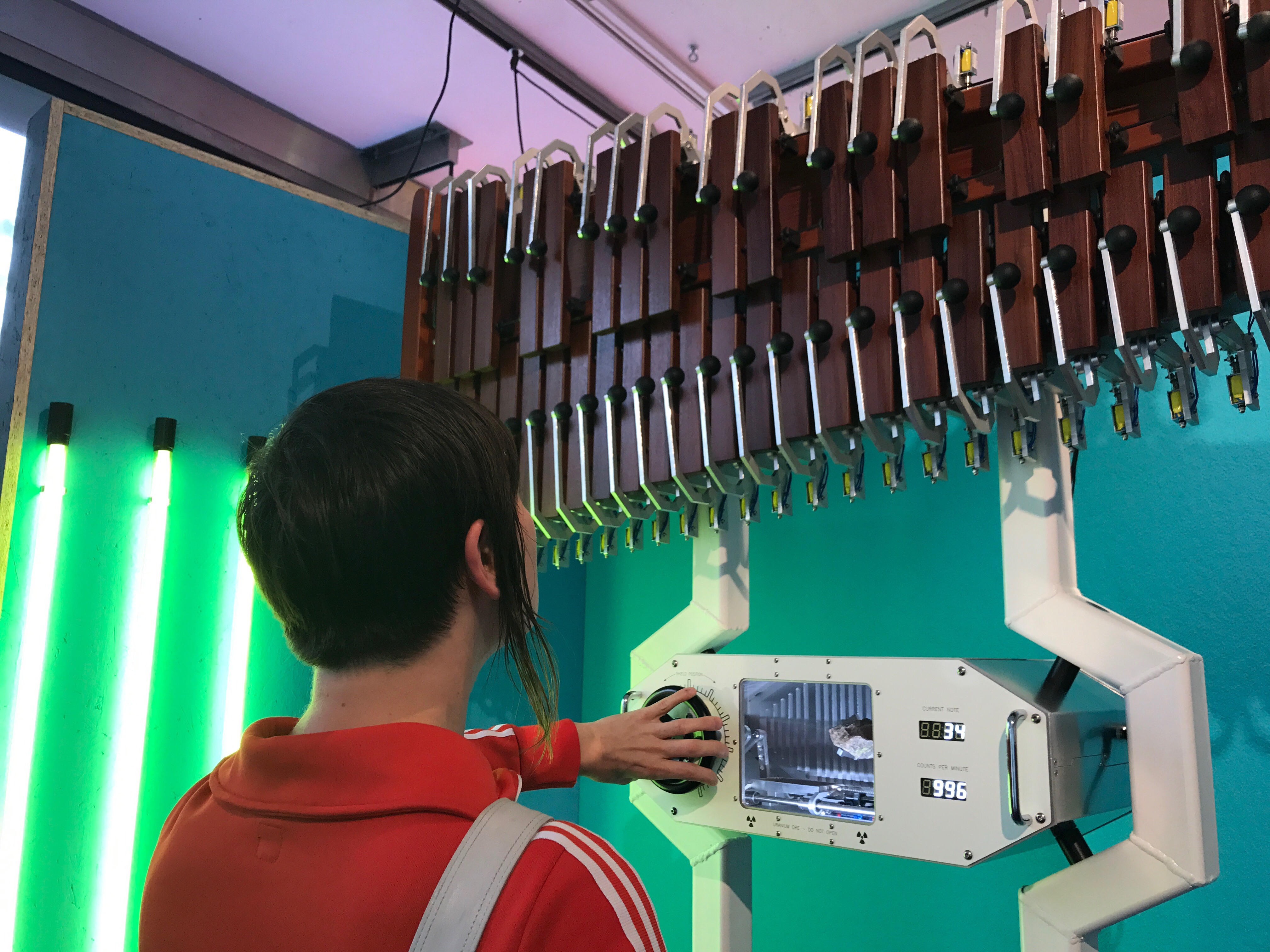 “Ore-Some Machine” allows visitors to move a lead sheet around a chunk of uranium ore, translating the readings of a Geiger counter to the sounds of a large xylophone.
Sinéad Baker for The University Times

Walk into Trinity’s Science Gallery during any one of its free exhibitions and the installations on display in its Pease St location will, no doubt, be a feast for your eyes. But its latest exhibition, Sound Check, creates a new, auditory experience, assaulting visitors’ ears with everything from ambient chimes to strong synths.

As is typical of the Science Gallery, these works, from artists and creators all over the world, are interactive, allowing you to make music, and not just sound, by cycling a bike, playing pinball, touching teacups, interacting with uranium or swinging on a swing suspended from the ceiling.

The exhibition’s ground floor contains some of the most striking of these exhibitions, drawing you in by their sound as well as their sheer scale. “Ya Slip Ta Bang” presents a number of “sonic bikes” that can be taken out around the city, where specific routes will present the cyclist with text and music, through speakers mounted on the frame, that reveal the “often ignored under-layers of urban life”.

Nearby is “Synth Bike” by Sam Battle, whose beats pound around the room and speed up as the cyclist does. “Star Struck”, a massive four-person pinball machine made out of bass guitars, explores the musical potential of pinball with the creator, musician and artist Lucas Abela, aiming to give audiences the perspective of the performer.

Comprised of three swings suspended from the ceiling, “Baloica” transforms the act of swinging into a musical experience, with a motion sensor capturing the movements of those that swing back and forth. Created by multidisciplinary Portuguese studio Elas Duas, the work demonstrates the diverse backgrounds of those exhibiting the works, whose expertise goes well beyond music.

Indeed, David Cranmer, whose work “Ore-Some Machine” allows visitors to move a lead sheet around a chunk of uranium ore, translating the readings of a Geiger counter to the sounds of a large xylophone, works in the areas of metal works and electronics.

For many of the artists exhibited, it’s the potential of everyday objects that presents the most interesting potential. “Mogees”, created by the company of the same name, lets everything from trees to chairs become music. In the Science Gallery, it’s a fully set table that lets users play around, converting everything from the rattling of dried chickpeas to the tapping of a bowl into ambient music by analysing the vibrations these actions create. 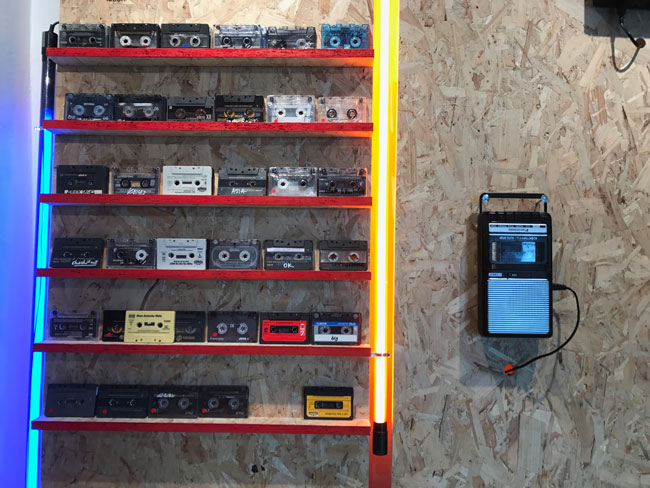 Other works seek to challenge existing conventions, both of sound and beyond. Alexandra Murray-Leslie has, for the past 10 years, worked to research and create a high-heeled shoe that can create music, challenging both the notion that only hands can create music and the “crazy relationship” that women frequently have with such shoes. The product of ongoing research into everything from circuit boards to 3D-printing technology, the shoes have been used in performances and exhibitions from the Isle of Wight Festival to the Museum of Modern Art (MoMA), continuing to, what Murray-Leslie describes to The University Times as “twist the meaning of the shoe”.

Murray-Leslie, as part of feminist music and fine art ensemble Chicks on Speed, will be playing the first residency at the gallery’s Moog Sound Lab. A unique analogue synthesiser studio, the sound lab will see artists from Sam Battle to Linda Buckley host residencies in association with the National Concert Hall during the exhibition, with Chicks on Speed playing until June 12th. The studio, based around an extremely rare prototype of Moog’s 2015 reverse-engineered system 55 reissue, includes a range of units, from keyboards and synths to vintage pedals.

Elsewhere in the exhibition, visitors can blow into flowers to create music, layer tapes that contain samples including the words of US President “DJ Trump” and transform their voice into birdsong.

While the Science Gallery’s exhibitions often serve to unsettle, to make us question the world around us, Sound Check offers more of a chance to celebrate, to make music and connections.