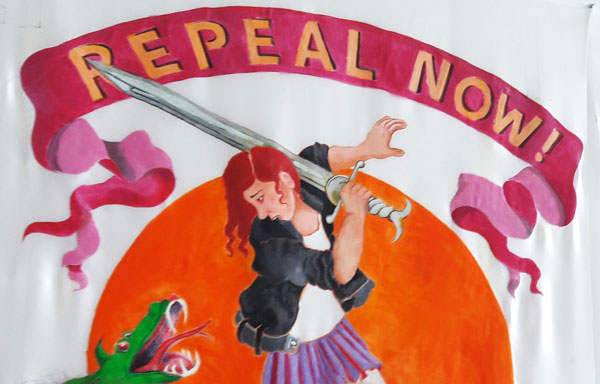 For much of the campaign to repeal the eighth amendment, Dublin has been the epicentre of activity. Yet, as you move west, outside the capital, efforts are less concentrated, with pockets of people working to ensure the cause doesn’t lose momentum outside of the capital.

Driving to Alice Maher’s home studio, located in the west of Ireland, the safety blanket of the city falls away. When people once again descend upon the city to march in the coming weeks, this time it will be under banners created in this studio.

Maher and her two co-artists, Breda Mayock and Rachel Fallon, have spent the last few weeks creating three banners which will be unveiled at the March for Choice on September 30th. Maher became involved initially with the Artists Campaign to Repeal the Eighth Amendment. From here, she knew she wanted to create something useful to the campaign, but which would also serve as a historical marker of the struggle for bodily autonomy. Speaking to The University Times by email, Fallon said “we need to show women that we trust them to make the right decisions for their lives and their bodies”.

Banners have a strong legacy in various groups, from the Orange Order to trade unions. Inspired, the artists took a trip to the the banner collection at Millmount in Drogheda, and made the decision to create a collection of banners that could be used at future events. Mayock, who also lives in Mayo, was invited on board. “I just object to it totally and wholly and you know I do think, at any time in my life, I’ve never felt so strongly about getting out and marching. So that’s what we’re doing”, explains Mayock.

I just object to it totally and wholly and you know I do think, at any time in my life, I’ve never felt so strongly about getting out and marching. So that’s what we’re doing

The banners are based on the work of three other artists. The women have taken the images from these works and created a repeal-themed version on pure silk. Each banner will be carried by two people while 16 other smaller banners, with eyes on the front and letters that spell out “repeal” on the back, are being created by artist Áine Phillips.

The first banner is based on a section of the “Polyptych of the Misericordia” by the Italian Renaissance master Piero della Francesca. The original image, in Maher’s words, shows “a very calm, beautiful and majestic mother”. The women were inspired to use this image after Mayock, who was taught by Maher, reminded her of a story about how her school would give each graduating girl a statue of the Virgin Mother. Maher says this was like telling girls to aspire to the impossible. “She’s a virgin mother and we’re supposed to aspire to this?”, she asks. “It was never saying aspire for any higher.”

This banner is about reclaiming the image and idea that women must behave in a certain way. Her cloak, slightly open, has repeal symbols scattered across the inside, while her dress is covered in hand-embroidered eyes. The eyes were inspired by Black Lives Matter marches in the US where protesters marched behind enlarged images of black eyes, a reminder that they were keeping an eye on all the injustices their people were experiencing.

She’s a virgin mother and we’re supposed to aspire to this?, she asks. It was never saying aspire for any higher

The banners are created by drawing the initial image on acetate sheets and then, using an overhead projector, casting the image onto a sheet of silk on the wall. The outline of the image is then traced out and the details filled in by each of the three women. Maher’s studio has been used as base camp for the project.

The second banner that Maher shows me is based on “David and Goliath” by Orazio Gentileschi. The painting, which is housed in the National Gallery, shows David slaying Goliath. The artists’ version depicts a young girl with a leather jacket and fiery red hair wielding a sword over a dragon covered in eighths. “The Slasher” is the nickname the women have bestowed upon her. Initially, there was a snake instead of a dragon but Fallon felt like snakes had been misrepresented in history and so the image was changed. “That’s the great thing about working with other people”, explains Maher, “everyone brings in their concerns so you think ‘oh, I never thought about that’”.

The third banner is based on a Grayson Perry scarf that Fallon wore one day. The British artist – famous for his fiercely political ceramics – created a series of limited edition scarves. The three women decided to show different parts of the struggle women in Ireland have experienced with “planes, trains and automobiles” to show the journeys they have undertaken. Some of the images include the scales of justice, the judiciary pulling a woman’s body apart and the church with the Whore of Babylon coming down on it. “I think your generation are great”, she tells me. “The girls are really bringing the guys along with them”, which she says is a change from years ago when you “were told it’s really only your business”.

The hope is that, if the eighth is repealed, these banners will be used as historical illustrations of the fight that took place. “They actually script the journey”, says Mayock. “They’re part of the journey of women’s rights and part of the choice campaign.”