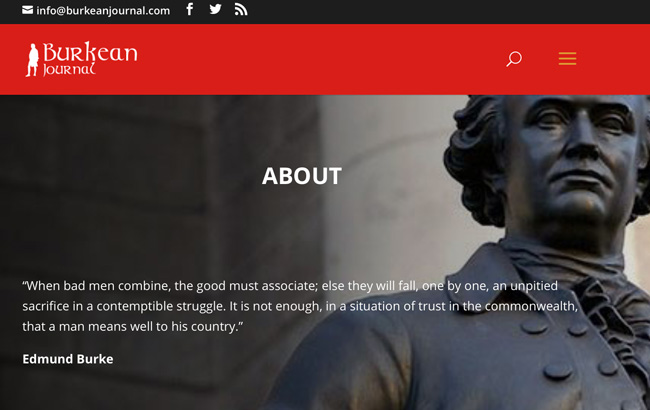 The publication takes its name from Edmund Burke, the renowned Trinity scholar often referred to as the “father of conservatism”.
Burkean Journal

Financially backed by Irish entrepreneur and conservative Declan Ganley, a new publication, promising to combat the “degeneracy” spreading across the west, will launch in Trinity this week.

The online-only student-led publication, the Burkean Journal, will discuss contemporary issues in Ireland from a right-wing, conservative perspective. The publication takes its name from Edmund Burke, the renowned Trinity scholar often referred to as the “father of conservatism”. Online already are a number of articles addressing safe spaces, the abortion debate and populism.

Best known for founding the Libertas Institute, a lobby group that successfully campaigned against the Lisbon Treaty in 2008, and the pan-European Libertas political party which won a seat in France in the European Parliament elections of 2009, Ganley is one of the most prominent conservative voices in Ireland. He spoke at the National Convention for Life 2014, where he was promoted as an “outspoken” individual unafraid of challenging the political elite and of trying to “reshape and reform” politics.

Speaking to The University Times, Deputy Editor and one of the founders of the publication Louis Hoffman said that its aim was “to promote conservative ideas on campus” in response to the “sterile” debate on campus. Hoffman, a third-year history student, said the publication was, in part, an attempt to challenge what the editorial team see as a left-wing monopoly on campus. “You can say and think what you want as long as you think exactly what [they] think”, he said.

Those on the editorial team see their role as important in stopping the “degeneracy” that Hoffman said is “spreading like wildfire across the western world at the minute”.

Hoffman said he was “surprised” at how much interest there was in writing for the publication: “We’re all so excited by all the interest we’ve got, the articles we’ve got.”

Citing the cancellation of Fox News in the UK, Hoffman said he was concerned at the lack of a “platform” for conservative ideas. The Burkean Journal’s editorial team will not restrict growth of the publication: “The aim is to start in Trinity and then spread out.” Speaking to The University Times, Hoffman rejected any parallels with Breitbart News, a far-right US-based publication that has played an instrumental role in supporting US President Donald Trump and has been credited with giving a platform to right-wing ideas in the US.

The editorial team, according to Hoffman, has differing opinions on many issues, though “the external enemy has mitigated the internal differences” between the team’s varying shades of conservatism. The main issues they disagree on, however, is the eighth amendment, which Hoffman described as the “biggest” issue at the moment: “Some are save the eighth, some are repeal, but it will all be coming out when we’re writing articles about it.” He reaffirmed: “We really want to provide a platform in which people can disagree, can feel comfortable to write.”

Referencing the cancellation of a Society for International Affairs (SOFIA) event with the Israeli Ambassador His Eminence Ze’ev Boker after Students for Justice in Palestine protested his speech, Hoffman claimed “a lot of people disagreed with it”. He expressed frustration with the students who he said were “proud” of blocking the Ambassador’s talk: “I don’t see the point in that. The aim is to promote free speech. And that’s what the western world was founded on.”

“It’s a sad day to see when people on this campus are taking active steps to stop that.”

Last year, the Trinity Politics Society screened the US presidential debates in the Pav and Hoffman, who describes himself as a “Trump fan”, said that he “knew for a fact that there was loads and loads of Trump fans” there but claimed that because of the “cultural stigma”, no one was willing to show their support for him visibly.

Hoffman welcomed criticism of the publication, which he described as “inevitable” and even argued that it would help them: “Inherently people are going to disagree with it and it’s their disagreement that’s going to get it out there.” While he said that their aim was not “to be controversial for the sake of it”, he stated: “I love when someone says I’m wrong. We all love when someone says we’re wrong because it strengthens our beliefs.”

The team hopes to publish a print edition next year, with the first year of the Burkean Journal set to be used as a testing ground to gauge popularity and to try and attract an advertising base. “To be properly regarded as a publication you need a print edition”, he said.

The team behind the Burkean Journal recently sent out an email to interested writers appealing for submissions. Some topics suggested to writers were the future of Europe, the eighth amendment, communism and cultural marxism. The publication is not only inviting Trinity students to write but will feature articles from students from other universities – they have already been in contact with students from National University of Ireland (NUI) Galway – as well as “some bigger names”, according to Hoffman.

Its website already features numerous names associated with right-wing, conservative viewpoints. Prominent pro-life campaigner Cora Sherlock has already written for the publication, as has Times columnist and economic commentator Cormac Lucey, who is Chairman of the Hibernia Forum, a free-market think tank.

The founders of the publication considered applying for funding from Trinity Publications, but decided against it. However, Hoffman said they would consider applying next year if they “wanted us under their wing” but said that it was important to them to have the “freedom” to publish what they want.