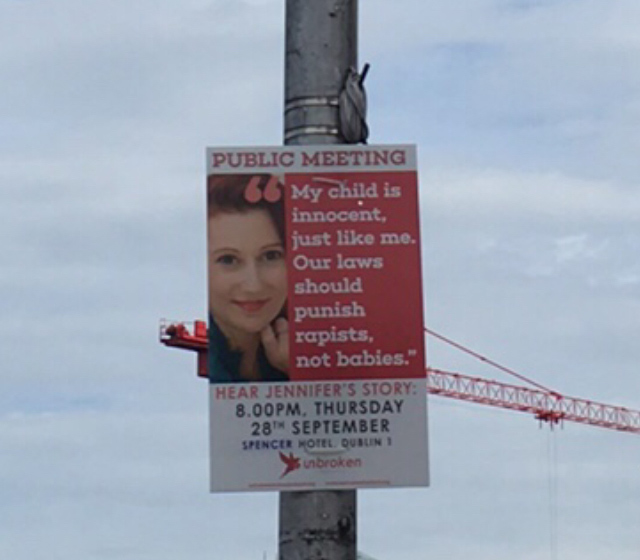 Niamh Egleston for The University Times

Trinity People Before Profit members have called their decision yesterday to take down pro-life posters across Dublin “the action of two individual activists” against “anti-choice zealotry”.

The Central Societies Committee (CSC) requested that the group remove the Facebook post as it went against their rules of societies advertising certain political positions.

The post showed two leading members, Conor Reddy and Sean Egan, taking down posters. Speaking to The University Times, they stressed that “the action wasn’t on behalf of the society. It was in a personal capacity”.

Reddy and Egan insisted that their actions were not on behalf of the party’s Trinity branch nor were they on behalf of the political party nationally. They added that they “don’t condone taking down any pro-life posters”. But these ones in particular they felt the need to take down “because of their content and the tone that they took”.

Reddy told The University Times that they took down the posters down because they “felt that the content of the posters was specifically directed at towards victims of rape” and would be “traumatic” for sufferers to see.

The action, Reddy said, was in line with the group’s position on certain issues, saying that their position was: “People who discuss political conflict purely in terms of speech and discourse are often the most insulated from the most material consequences of bigotry and inequality in our society.”

The posters, pinned to lamp posts around Trinity’s campus, were put up ahead of the March for Choice on Saturday. The posters, promoting a public meeting on September 28th, include quotes such as “I was conceived in rape. I’m still a human being” and “my child is innocent, just like me. Our laws should punish rapists, not babies”.

The posters were put up by pro-life group Unbroken. The group recently organised a project called: “Ending the Silence: Women Impacted by Pregnancy from Rape Speak Out”. Co-Hosted by the Life Institute, the event was cancelled by the hosting venue, the Gibson Hotel.

In an email statement to The University Times, spokesperson for Unbroken Laura Ní Chonghaile called on People Before Profit to condemn the taking down of the group’s posters. “We need the People Before Profit TDs to condemn these actions immediately, and we want our posters put back up today. There is no place in a democratic debate for this extremism, and for shouting down women who have been raped,” she said.

Egan said that, in response to these kinds of campaigns, he felt “people should feel empowered to actively shape the type of political discourse they are being subjected to”.

Thousands are expected to attend the March for Choice on Saturday, as the pro-choice campaign prepares for a referendum in May or June 2018. In recent years the size of the crowds attending such marches have steadily increased.

Niamh Egleston and Dominic McGrath contributed reporting to this piece.