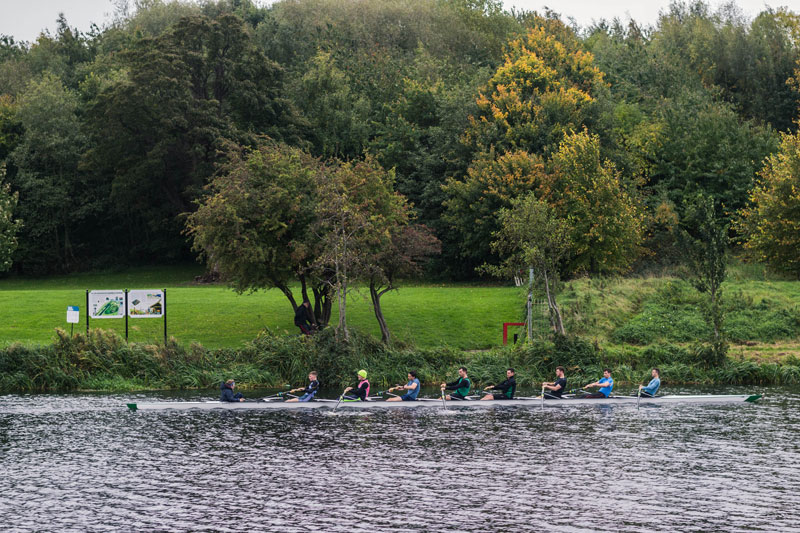 At a point where cityscape meets suburbia, the Liffey meanders to a deep solitary flow, as if anticipating its murky death in Dublin Bay. Here, urbanism dissolves like a Berocca boost dropped in a glass of water, the birds sing from the leafy banks and labradors roam the grassy paths ahead of their gilet-clad middle-aged mums. This is Dublin University Boat Club (DUBC) and Dublin University Ladies Boat Club (DULBC) territory, an idyllic patch, purchased by Trinity in the late 1890s for the premier rowers of the land.

On the soft lip of the river, the clubhouse sits dominant, its monochrome exterior strikingly different to the local palette like a zebra in a herd of Aberdeen Angus. Alas, the entrance front is far more sedate, with only a hint of zebra in the apex of the two gables. This side of the building is spread over three bays and reaches two storeys in height, seemingly modest in contrast to the waterfront façade, where an overhanging pavilion stretches seven bays across.

On the first floor, seven tall French doors open out onto the gabled pavilion. The pavilion hugs the structure and acts as a viewing platform, marking the spot where bold stripe blazers and champagne flutes meet, where polite chit-chat turns to raucous cheering, where a silent smoke becomes a midnight escape. In essence, this transitional space between interior and exterior fulfils its role with flair and perfection, a well-thought-out addition by Ruldolf Maximillian Butler in the early 20th century.

As a whole, the clubhouse has a distinctly British aura, one that is accentuated by the monochromatic Tudor-style gable fronts. Here, white render fills the void between black lacquered wooden supports. This neo-Tudor aesthetic emerged in Britain during the Victorian era, but never truly flourished in Ireland. Could it be that William Godfrey Ferguson, the Belfast architect who designed the clubhouse in 1897, drew his unionist agenda into the plans? Alternatively, the monochromatic nature of the Tudor style bares a striking parallel to the boat club colours of black and white. It may have been a well-planned element in the design, or simply pure coincidence, but one thing is for certain: these features make it unique in an Irish context.

Indeed, the clubhouse scores well above par in the looks department. As is the case with humans, however, external beauty does not necessarily mean internal beauty. Regrettably, the clubhouse interior lacks flavour, like a stick of carrot minus the hummus. With that said, it too contains a particular charm. Upon entry, the visitor is greeted with a broad flight of stairs that leads directly to the first floor and to the main reception room. It is plain and generously proportioned with seven glazed French doors, the leafy views enticing one out to the waterfront portico. Beneath, the ground floor is consumed by stacks of boats, oars and other equipment, with wide barn-like doors facing the Liffey currents. Simple it may be, but what it lacks in spice, it makes up for in functionality, and acts as a solid seat for DUBC and DULBC.

Ultimately, the structure radiates a quaint grandparent-like charm and wouldn’t look out of place in an episode of Midsomer Murders. Its endearing character is emphasised when contrasted against the University College Dublin (UCD) boat house upstream. The shed-like structure of breeze block walls and aluminium roof sits ignorantly in its surroundings like a humble cow chewing its cud, existing in a different league altogether. As the Liffey continues to flow, as the birds continue to sing, as the Trinity Regatta is lost and won, the clubhouse will continue to shine, a true diamond in the rough.