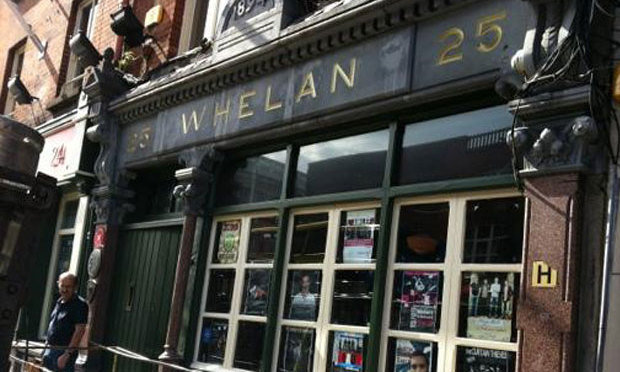 Tonight’s gig in Whelan’s marks the end of Amber Run’s UK and Ireland tour, a point that some believed the band might never reach. After losing its drummer and being dropped by its label, the future of the four-piece was uncertain.

The band’s second album, For A Moment, I Was Lost, is about not letting themselves be defined by the difficulties they face. Speaking to The University Times, Joe Keogh, frontman of the band, says that he never doubted that the band had a second album in them. Losing a band member and a label left them grappling with a lot of uncertainty as to what their next step should be. Calling this “toxic” to the band members’ creative process, Keogh explains that they had to put any doubts they had to the back of their minds: “Without having done the second record and without going through that uncertainty and finding what we wanted to do again, we wouldn’t have got to this point where we’re happy to be in a band and happy with the music we have.”

Amber Run came to the public’s attention in 2013 when, after a performance on the BBC Introducing stage at Reading, the band was signed to record company RCA. At the time, the band members were in their second year of studying humanities and law in the University of Nottingham. Keogh maintains that the decision to leave his course is one he doesn’t regret, saying “there are so many different ways to go about things in your life”. Pausing, he explains that university happens in “a really interesting moment in your life”. “You’re cementing what you’re all about and what you’re interested in and deciding the kind of person you want to be. We just did that in a different place”.

While recognising that university is the right place for some, leaving has afforded Keogh opportunities that he would never have had otherwise. “I feel like I’ve learned a load”, he says. “I mean, that’s all you’re really doing in university.”

Keogh believes that the second album “is some of the best stuff we’ve ever done”. Anyone who listened to the band’s debut album 5AM can hear the switch in direction. At the time of writing and recording, the band was focusing on other artists who Keogh describes as “lyrically and sonically interesting”. This influence can be seen in tracks like “Haze”, which is closest to the harmonic 5AM. Keogh says looking back, he can hear these influences in the tracks, especially on the more rock-focused tracks.

The current tour will be the first time that many of the songs are played live, something that differs greatly from their debut, which was largely road tested before it came out. The success of 5AM and the uncertainty the band faced meant “there just wasn’t an opportunity for that” this time around. “It was just different”, explains Keogh.

Despite the work that was put into the band’s relaunch, Keogh says that the first show back was “fucking dreadful”. Aware of all that had happened and the expectation to come out fighting, he explains that they were all “so nervous having come back after working so hard”. Keogh laughs at the memory, describing the gig as “overthought and overplayed”. After that, the band paired back the show. Cutting out all the extras that had been added in, he says they just played and it was only then that they “started being great again”.

While the tour ends tonight, Keogh and the rest of the band have already started preparation for another album, saying “we’re super excited to bring the band somewhere new”.