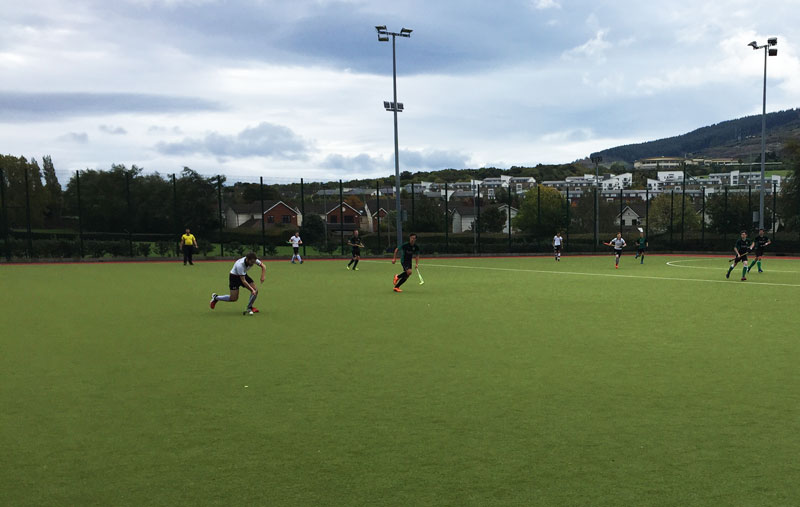 Dublin University Hockey Club (DUHC) fell to a heavy 8-2 defeat today at the hands of league leaders, YYMCA Hockey Club. Played in miserable conditions in Wesley College, the game was reasonable until a second-half implosion from Trinity allowed the hosts to run away with the game and consign DUHC to their second defeat in two games.

In contrast to the goal-glut it would become, the game began in cagey fashion, with both sides feeling each other out. YMCA offered perhaps the greater attacking threat, but Trinity captain Rory Nichols was an inventive presence with some probing long-range passes. It was a defensive lapse that led to the game’s opening goal, as Trinity defender Eoin Buttanshaw had his pocket picked 15 minutes in to allow YMCA in at goal. They took full advantage of the proffered opportunity.

This seemed to stun DUHC into life, and the intensity of their pressing picked up considerably. After a sweeping pass from Nichols found Cillian Ryan in acres of space, the latter cleverly drew in the last defender before squaring to give Wilf King a tap-in.

However, it wasn’t long before YMCA regained their lead. A foul just inside the D handed YMCA a short corner, and they took full advantage, with forward Jamie Tobin’s effort skidding in off a Trinity stick. YMCA’s third goal also came courtesy of a short corner, as a simple routine ended with Gabriel De Grandis tucking home.

Trinity pegged back the hosts once more 10 minutes into the second half, with Cillian Hynes again involved. A breaking ball fell at his feet and he made no mistake, firing an excellent reverse-stick effort into the bottom left-hand corner.

However, the game then got away from DUHC in quick and brutal fashion. Grant Glutz landed a sucker punch, expertly finding the corner after some good link-up play. After a quick counter-attack, Ben Campbell made no mistake to put the game out of Trinity’s reach.

And there was to be no let-up, Campbell doubling his tally for the day soon after with a cracking effort from just inside the D. Tom Ritchie buried high to get his name on the scoresheet, and, with unforced errors creeping into Trinity’s game, Tobin scored again to complete the route.

The final whistle sounded soon after to put DUHC out of their misery. They will search for positives in their first half performance, but the ease with which YMCA put them to the sword after the break will be a source of concern. They will need to pick themselves up quickly after today, as they take on Clontarf tomorrow in their second game of the weekend.