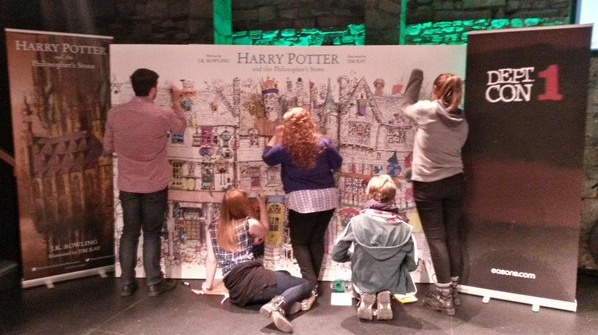 DeptCon, now in its third year, is Eason’s annual Young Adult Fiction Convention. Held on October 13th and 14th in the Tivoli theatre, aptly located within the creative stronghold that is Dublin’s Liberties, the two-day event hosted almost 50 authors from around the world. Having previously boasted the likes of Patrick Ness and Louise O’Neill, this year’s DeptCon had signings and panels that were hardly less illustrious, with big young adult-world names such as Holly Bourne, Katherine Webber, and Juno Dawson taking the stage. Authors closer to home were also prevalent in the line-up, with Eason successfully spotlighting Ireland’s own burgeoning community of young adult writers.

To say that young adult fiction has only really taken off in recent years would be an understatement. We’ve always had incredible works of young adult fiction lining bestsellers’ shelves and classics lists, from The Outsiders to Lord of the Flies. But in a post-Harry Potter world, where adult readers have started to take seriously work aimed specifically at younger audiences, it’s fair to say that young adult fiction has come into its own. Renowned books such as The Fault In Our Stars and The Hunger Games are only a drop in the ocean, and the scope of DeptCon in welcoming international bestselling authors, and attracting hundreds of attendees of various ages, is testament to that.

Ireland’s historically rich literary scene makes no exception to the soaring young adult trend, throwing young authors such as Deirdre Sullivan, Claire Hennessy, Catherine Doyle and Sarah Maria Griffin into the pot, all of whom made their voices heard loud and clear over the weekend’s panels.

What is striking about the genre at large is the predominance of women and female voices, and it seems like this move towards the young adult genre is perhaps a reclaiming of the previously disregarded genre of teen fiction – a close cousin of chick lit – where women’s voices, particularly young women’s, were not afforded any serious consideration. To say that an undercurrent of feminism ran through each DeptCon panel would be a gross understatement – it was more of a tsunami. Amid the assortment of highly-conscientious authors, frequently flying across stage were playful jokes about problematic favourites, from Enid Blyton to a discussion of Leonardo Di Caprio in Titanic as embodying the “Manic Pixie Dream Boy” trope.

It’s immediately obvious from listening to Claire Hennessy, one of the first panellists and author of Like Other Girls, how deep her exasperation towards Ireland’s long list of gender injustices runs. She admits it has even gotten in the way of her writing at times. Hennessy, despite being only 31, is actually a young adult veteran, having had her first in a long line of novels published at the age of 16. Like Other Girls is a timely look at a crisis teen pregnancy in Ireland in the shadow of the still deeply-rooted eighth amendment. Many of the book’s scenarios will be intimately familiar to Irish readers, and it’s clear that Hennessy is deeply inspired by growing up in Ireland, albeit not always by the good parts: “I think why people write for young adult is because that part of your life feels so raw and important to you.”

Hennessy personally sees secondary schools as “hellish places of doom”, comparing them to modern-day dystopias – which makes them the perfect setting for a dramatic novel. Irish Catholic girls’ schools take it to a higher octave altogether, Hennessy spoke of the “shared weird experience” of strictness and religion, an example being the omnipresent practice of being forced by a teacher to a draw a picture of God.

Taking a step away from reality and into fantasy, young Galwegian author Deirdre Sullivan recently published Tangleweed and Brine, a collection of feminist re-imaginings of traditional fairy-tales (a notion becoming something of a trend, given Louise O’Neill’s upcoming reinterpretation of “The Little Mermaid”). For Sullivan, voice is central to her writing, being the intangible thing that grips you into the world of a book, “a combination of character, setting and environment. It’s like making a friend”. When asked what fairy-tale she’d like to be in herself, she replied “Beauty and the Beast”. She’d have bread from the baker everyday, free access to books and she’d “tweet about Gaston”. Her advice to other authors? “Read a lot. Not just good books. Read bad books.”

Also keenly informed by gender when writing, Catherine Doyle, author of Mafiosa – which features a young protagonist against the backdrop of Chicago’s mafia underworld – said: “I wanted to have a female friendship that was supportive, which is reflective of what I know of real female friendships.” Sarah Maria Griffin, whose debut novel, Spare and Found Parts will be available in Ireland next year, was also present at DeptCon as a moderator. Griffin is already known for her spoken word poem “We Face This Land”, which in 2016 was made into an iconic short film of repeal jumper-clad Irish women walking into the ocean. Other Irish writers who made appearances were Moira Fowley-Doyle, Orlagh Collins and Dave Rudden, all of whom served to make clear the promise of Ireland’s new, but undeniably blossoming, young adult fiction scene.