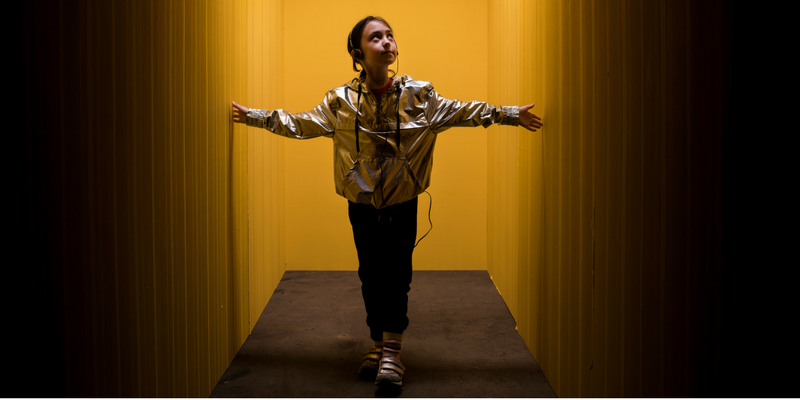 A new play, Girl Song, sees the return of Emma Martin’s company, United Fall, to the Samuel Beckett Theatre. The creation of the piece, as described in the programme, was inspired by “an image of a large empty and cold space, a young girl sitting in the corner”, and Martin’s use of the expansive Beckett stage captured this feeling perfectly.

The set, designed by Martin herself, takes up the entire stage with murky, white walls running from floor to ceiling. At the beginning of the piece we see a grey-haired woman touching one of the aforementioned walls. We are then greeted by two different women who begin to clean the space that is covered in black, shiny fringed carpet with a hoover and broom. We are finally presented with a young girl. The juxtaposition of the women present us with a question. Are these four women all the same woman at different moments in a life, or are they separate entities altogether? Perhaps this question makes it complicated for the audience to form a narrative for the piece. Having said that, does a dance piece require a clear, understandable narrative? Ambiguity seems synonymous with the story of the play.

The use of the space, in combination with the choreography, is what makes this piece an enjoyable, visceral experience. Martin’s contemporary style of choreography features elongated, broken movements in an attempt to capture the fear and isolation of the girl who is trapped in this space. The lighting and video design, designed by Stephen Dodd and José Miguel Jiménez respectively, blend together to create an aura of frightful loneliness.

The back wall of Martin’s set is used as a canvas for projection, which presents us with glitching television screens, and is used as another source of illumination. The two designs merge seamlessly, making the audience question whether the source of light comes from a projector or a theatre lamp. However, as the audio visuals begin to complicate – evolving from solid colour to more textural imagery such as television static and images of the space – the spectator begins to find more significance within the piece. At one moment, following a surprise drop of a television from the theatre’s gantry, the visual begins to appear like television static. This texture can only be achieved using projection and creates a more sculptural image on the dancer.

The combination of the piece’s design along with the contemporary style of dance and the abundance of questions that arise from it, makes the piece appear more like an installation of sorts, rather than a theatre and dance piece. This allows the performance to stand out amongst the plethora of other heavily designed shows in the Dublin Theatre Festival programming.