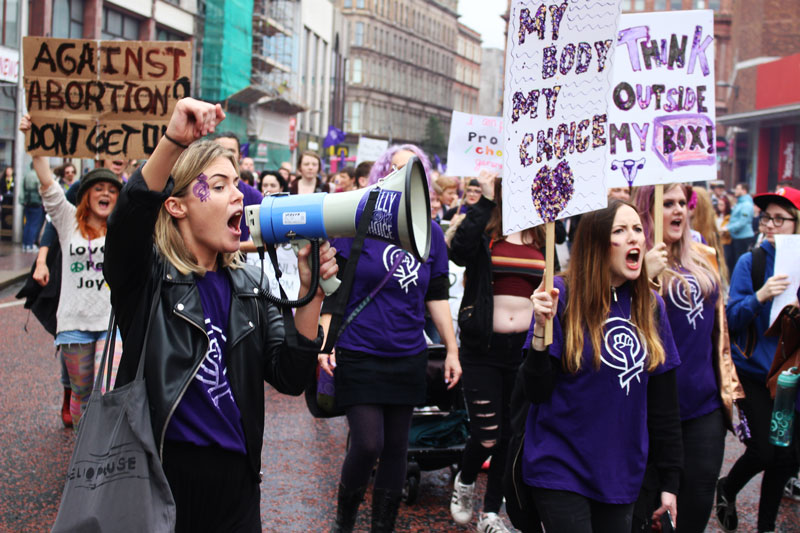 A referendum has been promised. The date isn’t settled yet, and the committee tasked with deciding on the wording might not be faithful to the recommendations of the Citizens’ Assembly. But change is in the air, as sure as a distinct autumn chill. We all felt it, didn’t we? As tens of thousands of feet marched through Dublin last weekend demanding change, it seemed tangible: this will be the last March for Choice, the women of Ireland will finally be able to reclaim bodily autonomy.

Except it’s not that simple. This island has two different jurisdictions, and prospects for even the slightest liberalisation of abortion laws are grim up North, where it is illegal in all but the most dire circumstances. Today, we held Belfast’s second Rally for Choice. Activists here are organising constantly and campaigning relentlessly, but still it feels a little like pushing against a brick wall at times.

There are a number of reasons for this. The first is the complex political and legal reality. Officially, the issue of abortion is devolved to the Stormont Assembly, which makes it dead in the water for all intents and purposes. The last time the question was before the Assembly in February 2016, members of the Northern Irish Assembly voted only on the legalisation of abortion in the case of fatal foetal abnormalities and rape, and both proposals were soundly defeated. This does not reflect the view of the public in Northern Ireland: 73 per cent of people agree with abortion in the case of fatal foetal abnormalities, and 80 per cent in the case of sexual crime. So why the gap between our views and those of our parties?

We cannot rely only on our sisters in Britain to push for the law to change here. We are asking for solidarity from you, our allies to the South, to help us make our voices heard

The two biggest parties, who had been in a mandatory coalition government for a decade before its collapse earlier this year (we’re currently without a government, which is not exactly encouraging) are the Democratic Unionist Party (DUP) and Sinn Féin. The DUP rejects the idea of abortion in any circumstances and are not going to change. Sinn Féin supports abortion only in the very limited circumstances of fatal foetal abnormalities and rape. Their proverbial understudies in the Ulster Unionist Party (UUP) and Social Democratic and Labour Party (SDLP) don’t offer much more hope: the former allows an open vote but, in practice, tends to be anti-choice, and the latter has repeatedly declared itself a “pro-life party”. The smaller parties are more promising. Alliance allows an open vote and is becoming more explicitly pro-choice over time, and both the Green Party and People Before Profit are in favour of full decriminalisation. Sadly though, they are much smaller parties.

So why does a mostly pro-choice population vote consistently for anti-choice parties? Coming from a time of conflict, Stormont insists on a coalition between the largest parties from the two communities: unionist and nationalist. In practice, this means that elections are fought with more fear than hope. Individual seats in hotly contested constituencies provoke letters to voters warning that it’s us or them. People overwhelmingly vote along tribal lines even when the party they are voting for does not represent their personal views on key issues, because to let the other party win is unthinkable. And so here we are. Stuck.

The next line of attack is Westminster. Ostensibly responsible for making sure that Northern Irish law meets human rights standards, it has been busily ignoring the problem for a decade. That is, until recently, when Theresa May’s Conservatives were left short of an overall majority after this summer’s election and turned to the DUP to make up the numbers. The British press was horrified. “Who is the DUP?” screamed endless exposés on this apparently awful, sexist and homophobic party – a party which had been operating an effective veto on any kind of progress in a region of the UK, apparently unnoticed.

The next line of attack is Westminster. Ostensibly responsible for making sure that Northern Irish law meets human rights standards, it has been busily ignoring the problem for a decade

But after the initial wave of shock and outrage, the furore died down. It seems like much of the fear was allayed when it became obvious that the DUP did not intend to impose its policies on Britain itself. We have allies in the opposition Labour party, which intends to push for full decriminalisation of abortion. Stella Creasy managed to attach an amendment to the Queen’s Speech, which has allowed women from Northern Ireland to access abortion in England and Wales without paying for the procedure, while Nicola Sturgeon has signalled her intention to do the same in Scotland. But it’s not enough: we still have to have the funds, time and opportunity to get to Britain. We need abortion access at home.

We cannot rely only on our sisters in Britain to push for the law to change here. We are asking for solidarity from you, our allies to the South, to help us make our voices heard.

I am from a border county and I studied in both University College Dublin and Trinity, living in Dublin for over a decade before moving to Belfast. My childhood was coloured by the Troubles and the scary spectre of the British Army patrolling border checkpoints. I know Belfast can seem far away, but it’s not like that any more. We have, I promise, more in common than many think – not least the same struggle for our rights. You are near the end of that marathon race. We are not. Hear our plea for solidarity and join us. Amplify our voices. Show everyone that we stand together on this. An injustice to one is an injustice to all.