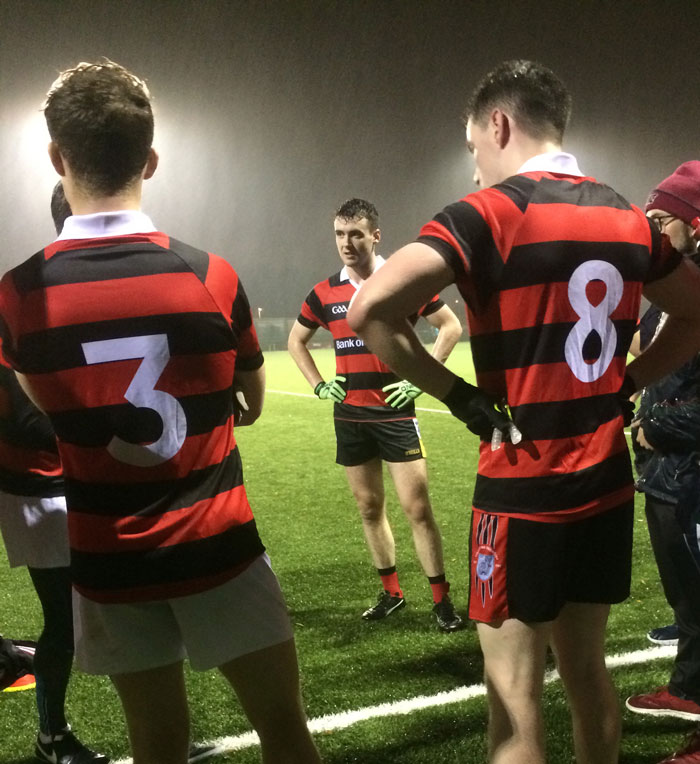 Trinity GAA’s Intermediate Gaelic Football Team began their campaign of the Division 3B league on a positive note as they drew against Dublin City University (DCU) in the university’s sports grounds, finishing on a scoreline of 3–9 to 2–12 on Wednesday evening under their new manager, Trinity alumnus PJ McGrane.

Trinity’s ability to battle hard in all areas of play to try and achieve their first win of the season saw stellar performances from all, only to come up short in the final few minutes to leave the sides on level terms as the rain poured down in Glasnevin.

Though conditions were not ideal with the team having to deal with constant rain on a 3G-based pitch, Trinity battled hard from the first whistle to get the first score of the game.

DCU acted very cleverly in drawing easy frees to try and progress up the field in order to make their mark on the scoreboard. While they were strong down the middle of the field and did manage to convert a few scores, Trinity’s defence put them under immense pressure, aided by the stellar work of goalkeeper Shaun Doolin, whose goalkeeping skills left many on the sideline in awe after some impressive saves saw many goal chances for DCU thrown out the window.

One sure goal chance was stopped dead in its tracks when Tadhg Browne met the DCU attacker head on, leaving the opposing attacker flat on his back as the ball was worked back up the field into the Trinity attack again.

With such dreadful conditions, some handling errors were made on the field and some chances did go astray for the Trinity footballers, with balls being dropped into the attackers and nothing coming of it. However, the constant work rate and movement of the boys in black and red eventually saw the creation of space and kept the scoreboard ticking over. Trinity were the first to rattle the back of the net, courtesy of Sean Moran, who after receiving a ball from the wing, drove in towards the square and slotted the ball past the goalkeeper to put his team in the lead. DCU didn’t lie down after this score, but fed the ball up the field and tapped over another few points, leaving Trinity going in at the break leading by only one point.

It was clear that the teamtalk at half time riled up the Trinity boys, who were eager to finish out the game strongly. Trinity stalwart Eoin O’ Neill set the tone for the second half and was quick off the mark, driving the ball into the DCU net within the first two minutes of the half. Although DCU struck back with a goal of their own soon after, further scores by O’Neill, Moran and Patrick Bohane kept Trinity in the game as they battled tiredness in order to try minimise DCU’s chances. Gavin Dowling was unlucky to see his effort disallowed, while Bohane saw a brilliant pass across the field into the full forward line go astray as no forward was able to control the ball.

Missed chances like these would ultimately see DCU creep back into the game with another few scores, but Trinity’s defence were key in making sure they scored the least amount possible. Unfortunately the damage was done and Trinity had to settle with a draw being the final result of this game.

Speaking after the game to The University Times, corner forward Sean Moran noted that it was “hard to judge the ball in the first half”, but as the game went on “we were able to judge it more … we used overlapping runs and we managed to get a few scores from frees and stuff”.

Full back David Lennon commended the defence’s efforts throughout the game, noting that while there was a lot of “possession coming through the centre”, a few more hits on the DCU players may have helped lessen their chances of scoring. Lennon also believed that this defence around the middle was handled well by the backs, even though “they had a few quick corner forwards, but we handled them well to shepherd them out of it”.

The intermediate footballers are up against Dublin Institute of Technology next in their home grounds on Santry Avenue on October 10th, with their senior counterparts beginning their campaign the same week against the same opposition in Division One of the Senior Football League.