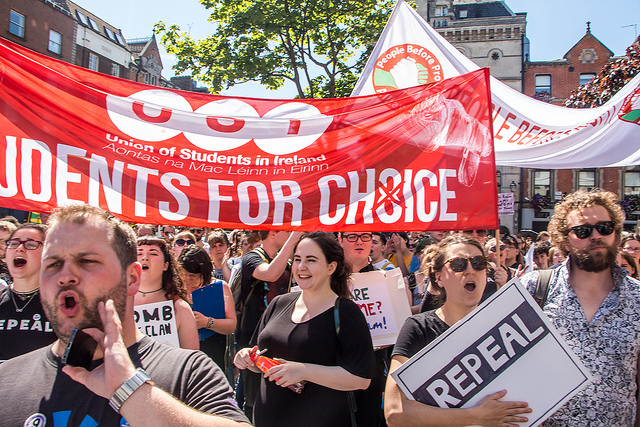 The Oireachtas Committee on the Eighth Amendment has made a number of wide-ranging recommendations to liberalise Ireland’s abortion law.

With the meeting adjourned until tomorrow, today finishes a day of proceedings that will go down as one of the most significant days in the repeal campaign. Despite tetchy exchanges towards the end of the day, proceedings – which began at 2pm – were mostly cordial, as various members suggested motions and voted on the recommendations of the Citizens’ Assembly.

The vote for a direct repeal echoes calls from campaigners for a straight repeal of the eighth amendment. Fourteen members voted in favour of the motion, with six against and one abstention from the Chairperson of the committee, Senator Catherine Noonan. Noonan said she felt it was best to not vote as she holds the position of chair.

The committee voted overwhelming in favour for abortion to be allowed in the case of fatal foetal abnormality. Noonan broke her pattern of abstaining from voting as she felt very strongly about the issue, voting in favour of the motion. However, in a vote that was 15-5, the committee rejected the motion that would allow abortion in the case of a foetal abnormality that is not fatal.

The committee voted 3-17 against a motion from Mattie McGrath to have suicide removed as a grounds for abortion.

However, earlier this evening, the committee voted not to include socio-economic background as a grounds for abortion past 12 weeks.

Since the Citizens’ Assembly made its recommendations earlier this year, the committee has been considering the report from the Citizens’ Assembly and listening to experts’ views on abortion and abortion law. These views were taken from all sides of the debate and included people such as former Trinity professor and prominent pro-life academic, William Binchy, and Master of the National Maternity Hospital at Holles Street, Dr Rhona Mahony.

This morning, Taoiseach Leo Varadkar said he wanted a referendum next May, meaning that a referendum bill would need to pass in the Dáil in January, after its members return from holidays on January 16th.

Earlier this year, Varadkar told an audience in Queen’s University Belfast that he’d heard and listened to student concerns about a summer referendum.

Students have been at the forefront of the campaign to repeal the eighth amendment over the last few months, marching in their thousands calling for a referendum.