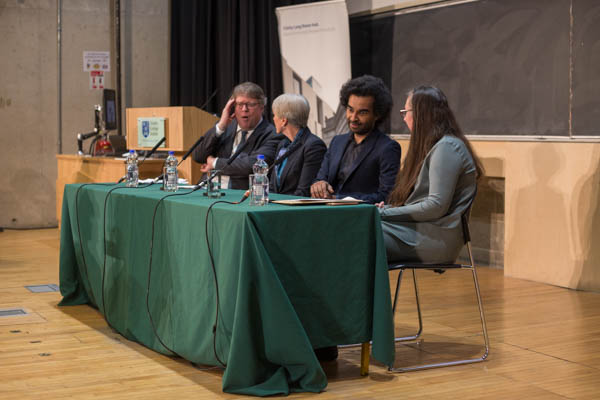 In a packed Edmund Burke theatre last night, the future of Europe was debated and dissected by a panel that included two Financial Times journalists and one of Ireland’s top Brexit negotiators.

And while conversation ranged from Brexit to borders and the ties that bind Europe’s countries together, it was a speech from Sophie Hingst, a PhD student in Trinity, detailing the complex emotional legacies and memories that prop up the EU, that earned a standing ovation from the audience.

Hingst was speaking alongside the Financial Times journalists Janan Ganesh and Sarah Gordon, as well as Rory Montgomery, from the Department of Foreign Affairs and Trade, in a joint collaboration between the Financial Times and Trinity for the Long Room Hub’s “Behind the Headlines” series. Hingst, who was one of the winners of the paper’s Europe-wide essay-writing competition, maintained the hopeful attitude towards the European project that defined her winning article.

Ganesh, a columnist in the Financial Times, was the first speaker of the evening. Admitting that it’s always “daunting” to discuss the topic, he focused heavily on the British anxiety of open borders and immigration that fueled the UK’s exit from the EU. Populism across Europe featured too, as Ganesh – an unapologetic remainer – wondered if Europeans had begun to forget that freedom of movement was more than a “purely ideological privilege”.

Following Ganesh, Gordon took the stage to discuss the economic benefits of migration and open borders. If the nitty gritty of trucks, tunnels and border checks dominated her speech, she also captured “what companies are feeling, what they’re worried about”. Ultimately, Gordon said, the idea that the soft border that exists between Norway and Sweden could be transplanted to Ireland and the North is a figment of policymakers’ imagination.

If the two journalists were comfortable discussing the ins and outs of policy, Montgomery took a different tack. Juggling his own contemporary role in Brexit negotiations with his own personal experiences of the EU, he said he felt “the European Union is fundamentally about the elimination of borders”. Yet his talk was pitched closer to the local audience – smuggling butter across the border and peace in Northern Ireland were placed side by side as Montgomery warned of the consequences of reinstating a hard, “divisive” border.

Yet Hingst, when she spoke last, made it personal. If her speech began with a quote from Edmund Burke, by the end it had taken the audience through her family’s’ experience of the Holocaust and post-war Europe. If Burke – a Trinity graduate – was being unduly optimistic when he said “no European can be a complete exile in any part of Europe”, perhaps, Hingst suggested, we need to remind ourselves of that shared vision today.

“We need to talk to people who are different from us”, Hingst said as the talk ended. If the future of Europe is to be secured, more debate’s like last night’s might end up being vital.