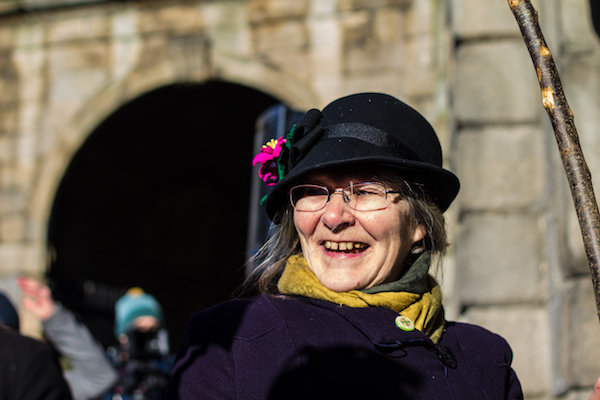 At 5am on June 13th 1912, Irish suffragette and founding member of the Irish Women’s Franchise League (IWFL) separated from her fellow suffragettes to smash in the window panes of Dublin Castle, before being arrested. This was direct action in response to the absence of the right to vote for women in the Home Rule Bill. While the other women went to smash the windows of the Custom house and the GPO, Sheehy Skeffington’s grandmother chose Dublin Castle because it was a symbol of British power.

Following her arrest Sheehy Skeffington and other suffragettes including Margaret Cousins and other members of the IWFL continued to fight and make their voices heard, as they mirrored the actions of the British suffrage movement until the Representation of the People Act was signed into law, which allowed women over the age of 30 to vote.

The re-enactment by Sheehy Skeffington today, dressed in the same attire that her grandmother would have worn, was accompanied by cheers and shouts of “votes for women” by the large group of spectators. This was followed by a speech in the original “soap box” style applauding her grandmother’s actions.

During her speech Sheehy Skeffington commended the centenary programme put in place by the Oireachtas, but heavily criticised the lack of commemoration of the suffrage movement by both the National Gallery and An Post.

Speaking to The University Times, Sheehy Skeffington noted that it was important “to recognise who won the vote for women”.

“It’s great that eventually they had elections at the end of the year and [Countess Markievicz] was elected, but it’s deeds like smashing these windows that made them notice the movement and really upped the ante.”

The smashing of these panes and the speech given by Sheehy Skeffington marks the unveiling of the first plaque and public monument dedicated to the actions of the Irish suffragettes. This plaque has been supported by Lord Mayor of Dublin Mícheál MacDonncha, who noted, when speaking to The University Times, that “you couldn’t have real freedom in Ireland without the freedom of women”. The Lord Mayor also hosted a reception for the purpose of commemorating the suffragette movement and Sheehy Skeffington.

During the reception Sheehy Skeffington spoke passionately about her grandmother’s life as she continued to fight for not only women’s rights but also the rights of all Irish people who had been subject to the influence of British rule.

The Oireachtas is holding a number of different events throughout the year to commemorate the centenary of the introduction of Women’s Suffrage, all of which builds to a celebration in December to mark the 1918 election. These events will include the unveiling of a group portrait of the current female members of the Oireachtas on International Women’s Day, on March 8th, an exhibition celebrating Markievicz on October 27th and a symposium on Women’s Suffrage to be held in Leinster House on December 7th.

Sheehy Skeffington has been following in the footsteps of her grandparents, advocating for women’s rights by fighting for the right to equal pay and promotion opportunities in NUI Galway. A former professor of botany, Sheehy Skeffington won an Equality Tribunal case against the university in November 2016 for discrimination based on her gender, after she proved she was a better candidate for a senior lecturer position that the 16 men that were promoted before her.