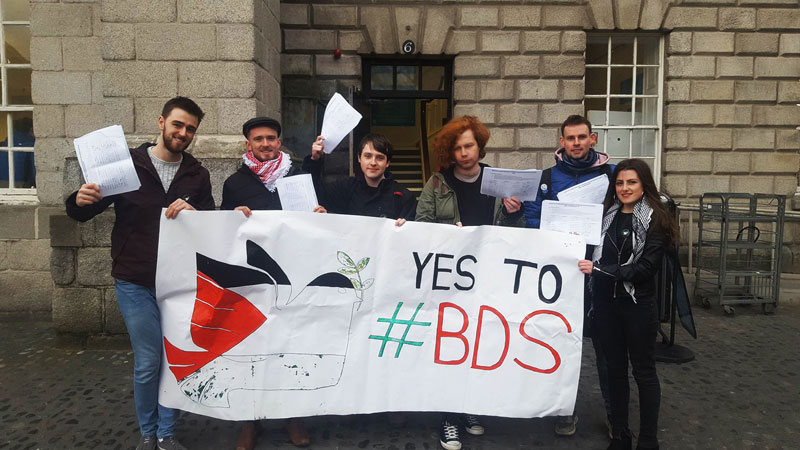 Students for Justice in Palestine

Students for Justice in Palestine today delivered a petition to Trinity College Dublin Students’ Union (TCDSU) in a bid to trigger a referendum on whether the union should back a boycott, divest and sanctions campaign against Israel.

Their petition gathered 1,000 signatures – double the amount needed to trigger a referendum. In an email statement to The University Times, Conchúir Ó Raidaigh, a member of the group, said that the “remarkably positive response we’ve received from classmates and students at large is testament to the relevance of BDS as a student issue”.

In an email statement to The University Times, the TCDSU Education Officer, Alice MacPherson, said: ​”The petitions will now be checked for validity to ensure they have met the requirements to trigger a referendum. In this instance, the Electoral Commission (EC) will meet to set a date, campaign expenses, and call any referendum.” A petition requires 500 signatures to trigger a referendum.

In April, at the final TCDSU council of the year, students voted against a motion calling for an academic and economic boycott of Israel. Following the vote, then-TCDSU President-elect Kevin Keane was forced to defend his decision to speak against the motion despite offering support to the campaign during last year’s elections.

The Students for Justice in Palestine group came to prominence last year, when they protested the visit of the Israeli ambassador, drawing criticism from Provost Patrick Prendergast.

Citing other campaigns backed by the TCDSU, such as Fossil Free TCD and the Boycott Aramark campaign, Ó Raidaigh said that the successes of those campaigns “show that Trinity students care about ‘big issues’ and are not afraid to act to effect change in line with our passionately held beliefs, both within College and beyond”.

The group hopes that in joining the boycott, divest and sanctions movement, TCDSU will draw attention to their belief that “Israel is guilty of Apartheid, war crimes and the denial of basic rights to Palestinians in Israel and the Occupied Territories”.

If the referendum is approved by the Electoral Commission, students will be asked whether they support and endorse the boycott, divestment and sanctions movement, as well as whether they wish to comply with the principles of the movement in all TCDSU shops and businesses.

The referendum will also ask students to agree to “establish a BDS implementation group open to all members of the union”. Finally, they will vote on whether to “campaign and lobby College to adopt BDS; which should include total boycott of the State of Israel (Cultural, Academic and Economic), divestment of college funds from Israeli and other companies listed on the BDS Divestment List”.

Separately, the Student Union Opt Out Project has handed in its own petition of over 500 signatures, hoping to trigger a referendum on mandatory membership of TCDSU. The group launched its own petition in November of last year, following the establishment of a similar organisation in Dublin City University (DCU).

As it currently stands, every undergraduate student in the College is automatically a member of the union once they register for the academic year. Funding for the union comes from the College’s general fund, which comes from student fees through the Capitations Committee.

On the Student Union Opt Out Project Facebook page, the group states its mission as “pushing for students to have the option to leave the Students Union should they choose to do so”.

The petition will ask students to affirm a new amendment to the TCDSU Constitution, to provide that “Membership of the union shall consist of All capitated students who have not opted out of the union by notifying Trinity College Dublin or the union of his/her wish not to be a member of the union and All sabbatical officers”, as well as that “Membership shall exclude students who choose to leave the union before or during the year. Such students will not be counted among union membership for union lobbying purposes without their express and direct consent”.

In an email statement to The University Times, organisers Harry Humes and James Martin said that the group looks forward to the referendum, and that they “feel very confident that students will recognise that their constitutional right to freedom of association is being violated by TCDSU and will vote for them to take action”.