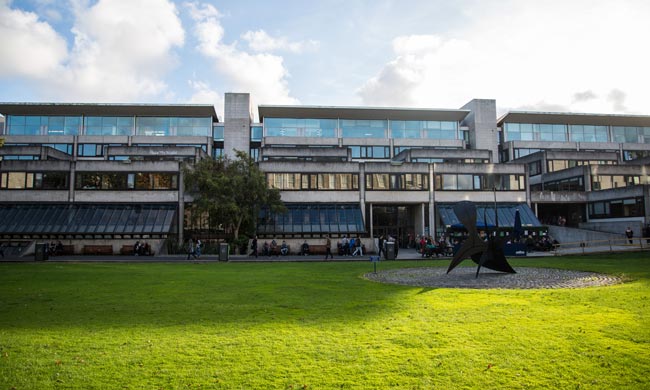 Staff in Trinity’s Arts Block have called the building “seriously overcrowded” and “inadequate”, adding their frustrations to persistent concerns about the decades-old building.

The building, due to undergo renovations to the value of €4 million over the coming years, was designed in the 1970s and currently hosts 4,500 students – 800 more than it was originally intended to accommodate.

In an email statement to The University Times, Dr Aileen Douglas, the Head of the School of English, said: “I feel ashamed that this is the best Trinity can offer.” Citing the building’s overcrowding as her primary concern, she described walking in the stairwells between classes as “a deeply unpleasant and sometimes slightly frightening experience”.

“At certain times of the day the concourse is jammed with circles of students sitting on the grounds because there is nowhere else to go”, Douglas explained, adding that the building is “accommodating more than twice the number of students for which it was designed and working in the building one is very aware of that”.

Looking ahead to the planned refurbishments of the Arts Block, she said that the “plans look attractive – it will give us a glimmer of how this poor hard-worked building was intended to be”.

The lack of light in the Arts Block was criticised widely amongst members of building’s staff, with Dr Eoin O’Dell, a lecturer from the School of Law, calling it “a common complaint” in an email to The University Times.

Dr Phillip Coleman, the Director of Postgraduate Teaching and Learning in the School of English, said, in an email to The University Times, that “many of the classrooms are too small, they don’t have any natural light, and the furniture and fittings in many of the rooms are no longer really fit for purpose”. O’Dell reported similar concerns, stating that “the lecture theatres and breakout spaces need serious upgrading”.

The planned improvements appear to be desperately needed and eagerly anticipated by Arts Block staff. “There is no doubt that the building itself has become very cluttered and shabby over the years and in terms of teaching facilities it is definitely in need of improvement”, Coleman said.

In an email statement to The University Times, the College Bursar Veronica Campbell said: “I can confirm that a project to address some of the deficiencies in the Arts Building, including some of the issues you raise, is at the early design phase.”

But academics are not the only group concerned about the building. Administrative staff working in the building have been left frustrated and angered by the lack of space since the removal of their common room. Speaking on the condition of anonymity, because they feared being critical would damage their promotional prospects, a staff member told The University Times in an email: “We had our Common Room taken from us as it was said by someone in the Arts Building that we didn’t use it.”

“They decided that without asking anyone the facts”, they said.

Mary Keating, a Senior Executive Officer in the Department of Italian, shared this complaint: “Room 4017 was taken from admin staff and we were told that it was under-used. If it was under-used it was because the room did not encourage use.”

In an email to The University Times, she spoke of how the room had no suitable furniture or appropriate kitchen facilities: “Everything you needed, whether kettle, milk, hot cuppa, cutlery, had to be brought back and forth from a floor above or below or at least along a crowded corridor.”

She also expressed concerns over the lack of security the room provided. “Anyone could barge in the unlocked door. Strangers can prowl up and down corridors looking for unguarded valuables”, she said.

The loss of this facility, however sub-par staff might have thought it, has infuriated staff. Their grade, as administrative staff, means they’re not entitled to use the Senior Common Room, which is above the Dining Hall.

The luxurious room is only accessible to higher grades of executive officers and the majority of academic staff. “Admin staff should have a place to go and have a sandwich or a lie down if necessary, and we shouldn’t be observed to see whether we are using it or not. Somebody or everybody would use it some of the time if it were fit for use”, Keating said.

Campbell said that she is “not fully familiar with the regulations for the Senior Common Room”.

Room 4017 was allocated as a student space in the last academic year, and an alternative common room has not yet been provided for those affected, despite requests from staff members. “The needs of admin staff in the Arts Building are not considered.”

Among the other complaints made was the state of the toilets in the building. “They are unhygienic and too few”, Keating said.

Some academics did have several positive remarks to make about the Arts Block. Coleman championed its contrast with the traditional architecture of Front Square, while praising the “positive environment” the building provides.

O’Dell also defended the much-maligned narrow corridors of the Arts Block. “The building opened in 1979, but the process of planning for it began in 1968, and that was a year of protest, particularly of student revolutions all over continental Europe”, he explained. “So the story goes that the building was designed to make it difficult for large groups of students to gather and riot. Hence, the dark and narrow corridors.”