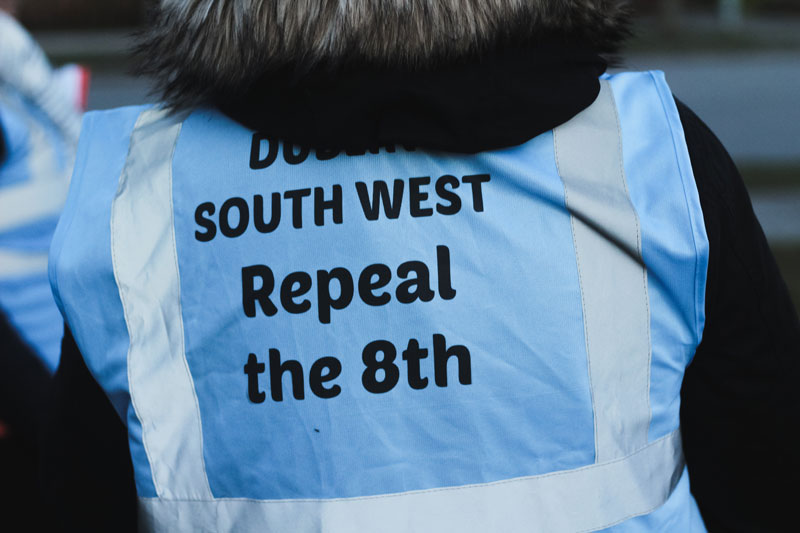 Government ministers Eoghan Murphy, Simon Harris and Katherine Zappone stood at the front of a bright Leinster House on a recent Wednesday afternoon to announce that a date for the referendum to repeal the eighth amendment had finally been set for May 25th.

On any normal day this would be top of the bulletin news. But four hours before Harris told reporters that it was now time for the Irish people to have a say on this “deeply private and personal matter”, a rape trial that had captivated the island’s attention came to a conclusion at Belfast Crown Court. All four of the accused were found not guilty on all charges.

It was this verdict, and not the long-awaited date for a referendum, that was the talking point amongst canvassers for the repeal the eighth amendment movement when I arrived to meet them in Citywest that evening.

The sky was increasingly dark, and clouds loomed overhead, intermittently threatening rain upon the nine women and one man who had assembled at Citywest Shopping Centre to canvass door-to-door. “It’s such a step back. I am so enraged”, Nicole Carragher, the group’s “designated young person” tells another. “Consent is so not discussed in this country, just because someone isn’t kicking and screaming doesn’t mean it isn’t rape”, she adds. One early homeowner works herself into a visible rage, linking the eighth amendment with the day’s verdict in the Belfast trial as just another struggle for women on this island. “I’d love to help but I’m not sure I’m someone you want on your side, I’m just so angry”, she rants struggling to stand still with the anger.

I just winged it. I asked him which way he was going to vote, am I allowed do that?

Whilst for some the upcoming referendum has been hard to ignore, for many people who answer the door to the canvassers, they are admittedly unsure of what they think, or concede that they “haven’t read into it much”. The common response canvassers give to this is typically “well, from what you do know, is there any concerns or questions that you have?” The aim of the canvass, as local councillor Emma Hendrick explains, is to have a discussion with people, not to lecture to them.

Most of the group are experienced canvassers and had been out the previous Wednesday, and the several Wednesdays before that too. Some too are veterans of the marriage equality referendum of three years previous or were politicised during the “Jobstown Not Guilty” protests. Halfway through the canvass though, the group is joined by a first-time canvasser. Approaching her first house with Hendrick, she is visibly skittish and nervous.

After three houses with Hendrick, she tries one on her own. “How was that?”, Hendrick asks. “I just winged it. I asked him which way he was going to vote, am I allowed do that?” It becomes clear from her mood after several more that there is something of a buzz you can get from calling to homes and bouncing off people. She explains to me that although this is her first time canvassing she was a big supporter of the marriage equality referendum, particularly, she says, since her daughter came out as gay. “She’d be here with me tonight but she’s away. She’ll definitely help out when she’s back”, she tells me.

It is hard not to draw parallels with the campaign of three years previous, especially since it seems many of the canvassers on the repeal side are crossovers from the marriage equality campaign. But with marriage equality having such a positive message, repealing the eighth amendment and abortion legislation is fundamentally a harder sell. “I think people are more private about this than marriage equality”, Hendrick says. “I don’t think that means that it’s closer or that we will lose. I think it means that people are afraid to tell you which way they are voting. It’s not necessarily a bad thing.”

At least Hendrick hopes it isn’t. It does appear though, that a large proportion of houses are undecided or not well versed on the issue. Few are outright nos but few are outright yeses either. One homeowner early into the canvass, evidently missing the repeal badge pinned on the canvasser standing before her, enquires: “What’s yes mean again?”

For what has long been described by many as a “divisive issue”, calling door-to-door it does not seem as such, at least in Citywest. The only truly hostile reaction of the evening came from a fervent Yorkshire Terrier. “We’ll be having a talk about it”, the owner says scooping up her growling terrier and taking the repeal information leaflet being handed out by the group. While some of the group can recall hostile reactions, Hendrick says that from her five or six experiences canvassing on the issue she hasn’t had any serious negativity.

At one unanswered door, Carragher lifts the lid of the letterbox to put through their leaflet, uncovering a leaflet from the anti-repeal side already stuck halfway through. “Oooh controversy”, she laughs placing her leaflet alongside it. Coming out from the driveway, the other side of the referendum, the pro-life group can be seen on the opposite side of the estate doing their leaflet drop. In contrast they look a little better dressed, more professional and less like an amalgamation of different people wearing common cause hi-vis vests. “It’s worth noting I think, they are just doing leaflet drops, we are actually having discussions with people and answering their questions”, Carragher says, referencing the opposing group across the estate.

The only man on the canvass (although he is eager to point out that’s not always the case), Rob Hunter runs the social media account Lads For Choice. He emphasises that the vast number of unsure voters is not unusual at this stage of a campaign. “People don’t make up their minds until 10 days before according to the stats”, he says.

“The last four weeks or the last three or two weeks are the important ones. We can do all these great things now but anyone who is engaged now has probably already made up their mind. It’s later that we need to get through to all the guys from different backgrounds and get groups together to really work hard.”

The last four weeks or the last three or two weeks are the important ones. We can do all these great things now but anyone who is engaged now has probably already made up their mind

With the sky further darkening and the clouds beginning to make good of their threats, the group agreed to knock on just a handful more doors before leaving. At one of the final homes, a woman smoking from a top floor bedroom window calls down to the canvassers: “I don’t even have to come to the door love, you have our votes here.” Hunter laughs: “Those are the moments that you get every 20 or 30 minutes where you think I don’t mind being out here. Those little positive interactions.” With the group agreeing to retire, they assemble back at the shopping centre car park to discuss their next canvass the following week, and their planned weekend stall in Tallaght.

After a long day’s work with a couple of hours of canvassing added on, a well-earned break would presumably be in order but for Hunter he says it’s hard to take a break from an issue he is so passionate about. “I don’t dream about it but I think about it all night. I think about it all the time. I’ll be a happy man once it’s all over.”

While much has been said about the importance of social media and online activity in garnering votes, in the minds of those canvassing there will never be anything more important than face to face contact and answering the questions and concerns of the public. With just over six weeks to go until the country goes to the polls, there are thousands of more doors to be knocked on and canvassers from both sides will be hoping they can make a difference.