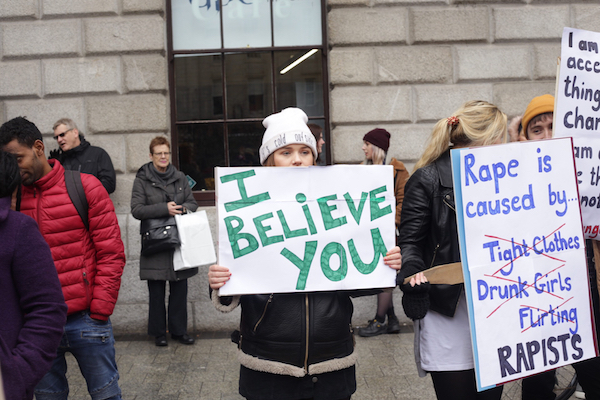 Since the outcome of the rape trial in Belfast was announced, it has become the most prevalent topic of conversation across the country. Everyone has an opinion, a story, an anecdote and a side: I believe her or I don’t.

But the impact of this trial is still impossible to predict because this is so much bigger than the verdict of a case.

This has been the first rape trial in my memory that has played out in the media and in the public eye for everyone to see, scrutinise and comment on. It has brought rape and rape culture into daily conversations, and the resulting comments from many have given us a frightening insight into the ingrained mindsets regarding these sort of issues.

Of course, this is about the case. I feel nothing but pity and sorrow for that brave woman who went through the trauma of this trial despite the repercussions it must have had for her mental health and general well-being. She has gone through so much, and now she has to go through so much more because our so-called “justice” system seems stacked against victims. It failed her and it has failed the women of Ireland.

It represented every woman who’s had to walk past their rapist in College every day or see them with their friends in photos on Facebook.

We were all on trial during this case. Every woman who worries that what happened to them wasn’t bad enough to report, who is reluctant to call it rape because they didn’t explicitly say no, every woman who feels like it was her fault, who still hasn’t told anyone what happened, who reported it and never saw justice.

For every girl who was raped, assaulted or harassed but never came forward, this case was meant to be justice for all of us. And by extension, the verdict of the trial was a loss for every woman and every person in Ireland who can empathise with what survivors have been through and still go through every day. We all waited with bated breath, not daring to be naive enough to think that justice would be served, but not cynical enough to not have hope in the legal system.

“Rape culture” is a phrase that’s thrown around a lot, to the point where it almost seems to be meaningless. But this trial, this verdict and the reactions to the verdict have shown how ingrained the culture is in our society, to the point that many people can’t even see it. Rape culture is girls being brought up warned of dark alleys and strangers, back streets and short skirts. We are told not to go out alone, not to walk home in the dark and keep your finger on your phone, just in case. But for most girls who are raped or assaulted, the reality is that we don’t go out alone. The perpetrator’s number is on our phones and we take the lit route home. Because when we are warned, they never tell us about the ones that we trust. No one tells us that it is far more complicated than a stranger and a back street, that the ones who we have the most faith in can use and abuse that power and control. No woman ever wants to learn that safety is a privilege afforded to so few people.

Sex is not the rent you should have to pay for living in a space marked “female”.

The Belfast girl followed every rule in the book. She did exactly what any website or expert will tell you to do in the event of an assault. How can any survivor feel as if there is any hope for them now, especially if they didn’t do everything exactly by the book? Every day, we read in the papers how every piece of evidence or recollection was torn apart or twisted. How can any other women ever dream of prosecuting when a case like hers was ripped to shreds? The Dublin Rape Crisis Centre has already reported that following the verdict, many survivors have told them that they will now never report.

The Belfast girl followed every rule in the book. She did exactly what any website or expert will tell you to do in the event of an assault.

Everyone who has accused the Belfast girl of lying has to consider why anyone would ever want to label themselves a victim. There is no motivation for making false claims. Her life will never be the same after this. The way that rape trials are conducted deserves an article of its own, because the inhumane treatment of this girl during the case, both during cross-examination and by the media, is enough to deter anyone from reporting and going through with the accusation. There is another conversation to be had about the morality and ethics of the reporting on this case, but for now, this conversation is encompassing the whole culture of what we as a society believe to be right or wrong, and how we view and treat victims.

As well as the ripple effect this will inevitably have on the number of people reporting, the verdict also sends a message that you can get away with the behaviour exemplified by the four men on trial. Some people make the point that those four men genuinely believe that their behaviour was beyond reproach and that they didn’t do anything wrong. If anything, this is just a further argument for the extent of how much rape culture has permeated into our daily lives and mindsets.

Every survivor of rape or assault has had to relive their experience every time there was a new development reported in the case, relating it back to their own trauma. If you are someone who is having trouble deciding where to stand on this, I urge you to practice basic human empathy. There are too many people who’ve had to pour bleach on their bed, too many stories of doors unlocked in the middle of the night, too many girls who feel that their bodies just exist to be taken. We all have friends who have survived an assault. I have two younger sisters and I am so scared for them, that this is the world that they have to live in.

We have to do better.

This is not confined to headlines. It’s in the rooms beside us. This is about hands and tights and nails and cries, about blackmail and photos and high heels and lies. This shows us that the law feels like it doesn’t owe us anything close to real justice.

It’s a vicious cycle, and it’s going to continue if we don’t all make a conscious effort to break it. The outrage regarding the verdict of the trial is the only redemptive part of it all. Rape and sexual assault are all about silence and powerlessness, so we owe it to the Belfast girl and the women of Ireland to refuse to be silenced, to ensure that our voices are heard, to march, to protest, to rally. If you’re not angry, then you’re part of the problem.