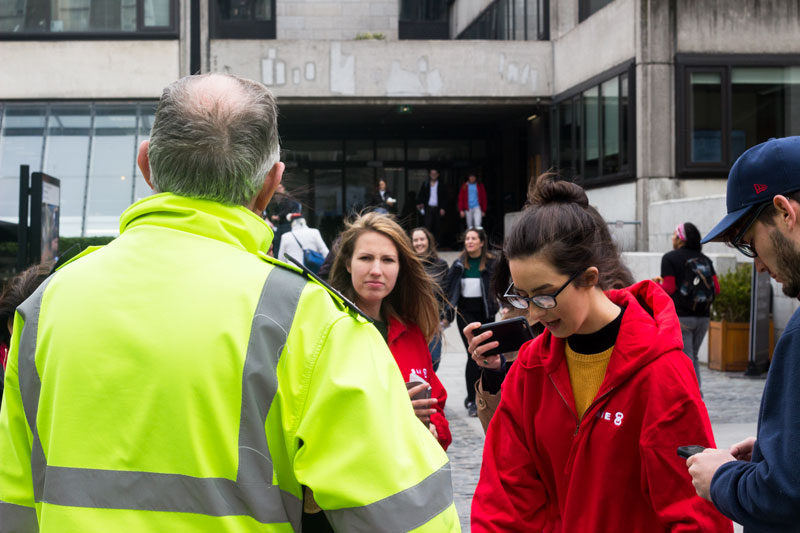 Members of the Save the 8th campaign were asked to leave campus today by Trinity security, after the pro-life group established a stall in Fellows Square.

Just yards away inside the Arts Block, Trinity College Dublin Students’ Union (TCDSU) was registering students to vote ahead of the referendum on the eighth amendment on May 25th.

The group was asked to leave by members of Trinity Security because it did not have permission from the Senior Dean and was not allowed to hand out leaflets. Trinity’s rules state that any events or bookings by external organisations must have the permission of the Senior or Junior Dean.

Situated just outside the Arts Block, the group was handing out leaflets to staff and students, with campaigners wearing Save the 8th hoodies. The group initially declined to comment to The University Times, but in an email statement after they left campus, Katherine Salvador, speaking on behalf of the group, said: “We are a group of individual pro life students and our purpose was simply to provide information to other students. We were only here for 20 minutes when we were confronted by Kevin Keane who contacted security to shut us down. For the 20 minutes that we were here, there was a lot of interest from other students and many of them wanted to take our leaflets.”

“The security guards were very helpful but they said their hands were tied”, she said. The group also said that one member had been in touch with the Equality Office and the Senior Tutor, Aidan Seery, before today’s canvass.

Speaking to The University Times, TCDSU President Kevin Keane said: “There’s a small group of canvassers on campus. It’s unclear whether or not any or all of them are Trinity students. They certainly have no permission from the union or the College to be here.”

TCDSU, which like students’ unions across the country is pro-choice, has been canvassing and campaign for a repeal of the eighth amendment for years. In recent weeks, the union has started canvassing and handing out leaflets on College Green ahead of the referendum.