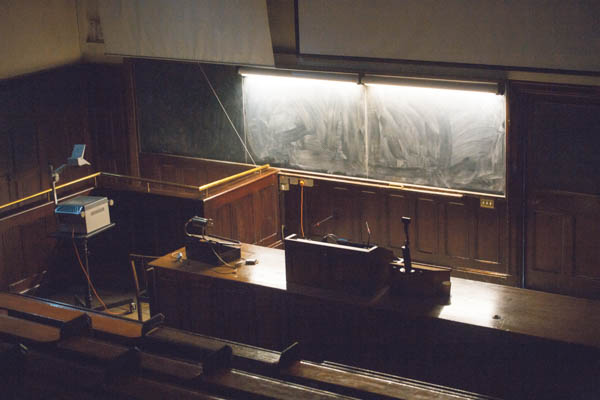 The Schrodinger lecture theatre, where students will present their reflections on the landmark conference.
Ivan Rakhmanin for The University Times

Trinity students have been offered a unique opportunity to rub shoulders with Nobel Prize winners and internationally revered scientists at the conference being held to honour the 75th anniversary of the Schrodinger lecture.

The conference will take place on September 5th and 6th in the National Concert Hall and will see internationally renowned speakers discuss the modern developments relating to Schrodinger’s original lecture, “What is Life?”, in Trinity, 75 years ago.

Students are invited to apply to serve as student ambassadors for one of the conference’s 24 speakers. Successful applicants will chaperone one scientist for the duration of the conference and will also present their reflections on their paired speaker’s presentation at a mini symposium on September 21st. This satellite symposium is the first of its kind and was set up by Prof Luke O’Neill, with support from Trinity Association and Trust.

In an email statement to The University Times, O’Neill, from Trinity’s School of Biochemistry and Immunology, spoke about the importance of student contribution to the international conference: “The most meaningful participation will be for the students to have a chance to give their reflections on the contributions from the speakers and have a chance to speak to them.”

“We feel that to have a mini-symposium where students can look back at the meeting and reflect where we now know the future would be really interesting and powerful”, he said.
Presentations at this international conference will address a range of topics, including systems biology, bioenergetics, memory, consciousness, ageing, human evolution, and artificial intelligence. The illustrious speaker list includes six Nobel prize winners, as well as leading business people within the science industry.

Lydia Lynch, a Trinity-based immunologist will be discussing “The Future of Immunology”. Lynch, who is the only Trinity academic to speak at the conference, studies the effects of diet and obesity on the immune system and how the immune system affects the regulation of body weight and metabolism.

Michael Rosbash, who won the 2017 Nobel Prize for Physiology or Medicine for his work on the circadian rhythms in Drosophila (fruit flies), will also present to the conference. His lab studies the processing of RNA, the genes and the biological mechanisms that regulate circadian rhythm – the biological processes that occur in 24-hour cycles.
The founder of the genome-editing company Editas Medicine, Feng Zhang, will also be in speaking. He will discuss “The Future of Gene Editing” in an age where DNA kits are widely available online and our personal genomes seem more accessible than ever.

The main lecture of the conference is will be given by renowned American philosopher Daniel Dennett, who will speak on “The Future of Life”. Dennett’s research and publications span many fields, including the philosophy of the mind, artificial intelligence and neuroscience. Dennett’s talk will directly address the theme of the Schrodinger 75 conference.

Other speakers at the conference include Linda Buck, Ada Yonath, Susumu Tonegawa and John O’Keefe.

Applications for participation in the conference are also open to Naughton scholars from all Irish colleges. Naughton scholarships are given to students pursuing STEM courses at third level. The scheme is funded by the prominent Irish philanthropist Martin Naughton.