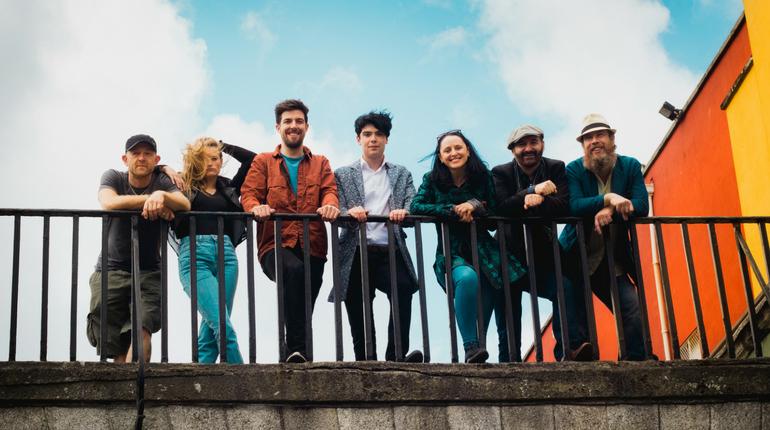 As I sat in the Civic Theatre, watching Dublin-based theatre company The Corps Ensemble present a section of their current work in progress, there was a sense among the audience that old stories can be reinvented in new ways. Emma Donoghue’s short story collection Kissing the Witch pushed boundaries when it was first published in 1997. In 2001, Donoghue adapted some of these stories for the stage in a further re-imagination of traditional fairy tales. Seventeen years on, The Corps Ensemble have tackled Donoghue’s daring collection from a uniquely fresh perspective.

During a Q&A session after the performance, Donoghue said that past theatre productions often feel like “a lost love affair”, and that it was thrilling to see Kissing the Witch regenerated in such a physical and innovative way. Donoghue described the inception of Kissing the Witch, which reminded the audience of the history behind these stories.

There was, however, an overwhelming sense in the room that storytelling is as relevant today as ever, particularly when shedding light on women’s stories. Throughout her career Donoghue has been renowned for addressing themes surrounding women’s lives and relationships, and she was quick to criticise the existing conversation in literary circles. Donoghue pointed out that there is often an onus on minority writers to explain their marginalised experiences to a mainstream audience. As an author of queer and feminist literature, Donoghue rejects that responsibility. She said she purposefully chose to write “girl-focused” fairy tales in Kissing the Witch, choosing female characters to take centre stage.

Michael Bates of The Corps Ensemble spoke of using Kissing the Witch to interrogate the broader question of whether life is dictated by fate or agency, and the play cleverly explores themes of choice and trauma without alienating any members of the audience. The beauty of Donoghue’s Kissing the Witch lies in its humour and accessibility, with many audience members identifying with the way in which Donoghue’s writing normalises minority experiences, specifically queer identity.

A young audience member described reading Kissing the Witch at 17 while they were coming out, noting that it was the first time they had read a book in which two girls kissed. Incidentally, the performance yesterday was the first time the audience member had seen two girls kissing on stage. Donoghue beamed, saying she had always intended to look at all aspects of women’s relationships, having consciously resisted the urge to continue the feminist rewriting of heterosexual experiences. The feminism placed at the centre of Kissing the Witch is incredibly intersectional, showing that traditional narratives can be recreated for contemporary audiences in bold ways. The play still feels fresh and relevant today in the midst of broader conversations about women’s experiences and Donoghue’s work plays an important role in prompting these discussions.

It was refreshing to sit in a theatre and see an excerpt of a work in progress being dissected by the writer, the producers and the audience. A sense of community was created between author, cast and theatre-goer, and there was a feeling that everyone involved in the process was valued.

More details of the performance can be found on The Corps Ensemble website, www.thecorpsensemble.com.