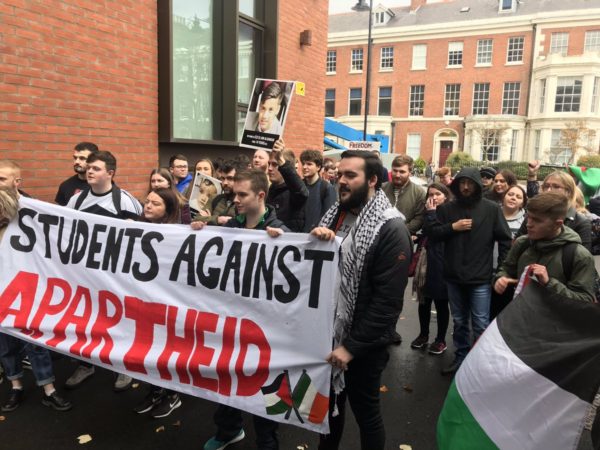 Students at Queen’s University Belfast Students’ Union (QUBSU) are protesting against a visit to the university by Israeli ambassador Mark Regev.

Students blocked the entrance to a room in the Law School where Regev was due to speak, before moving to the front of the school, The Scoop – the university’s student radio station – is reporting.

In a tweet, QUBSU said: “Regev flees the university, as protestors make it clear he wasn’t welcome in the first place.”

The ambassador was invited by the university to speak to students about “conflict transformation and social justice”.

In a press statement, QUBSU President Conor Veighey said that the union “recognises the continued suffering of the Palestinian people and supports students efforts to highlight the injustices inflicted upon them by the Israeli occupation”.

“This event highlights a blatant disregard of the University’s commitment to equality and social justice”, he said.

A spokeswoman for the university said an invitation had also been extended to the Palestinian ambassador to speak at a later date.

“Universities play an important role in society as places of debate and discussion where ideas can be tested without fear of control, where students learn to challenge ideas and think for themselves, and where rationality underpins the pursuit of knowledge”, she said.