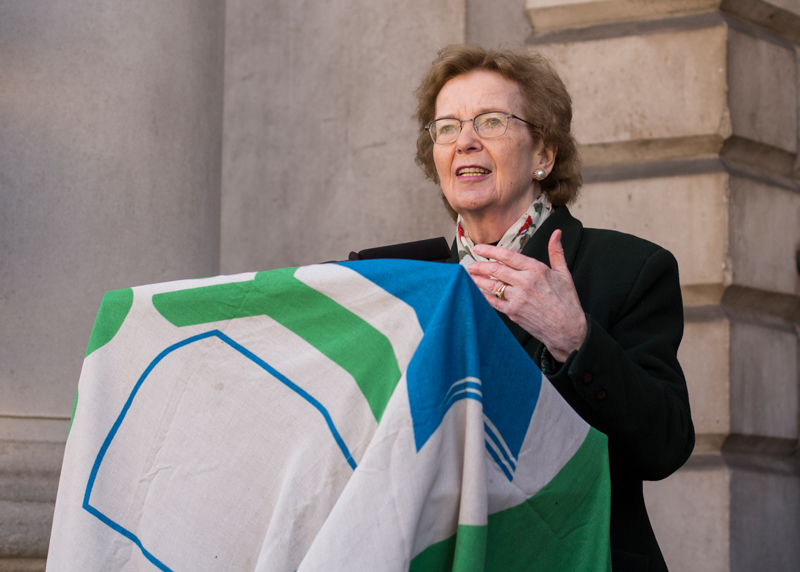 Former president, current Chancellor and champion of climate justice Mary Robinson spoke to a packed chamber in the Graduates Memorial Building (GMB) about the fight against climate change.

In a measured and insightful conversation with the College Registrar, Paula Murphy, and Trinity College Dublin Students’ Union (TCDSU) Environmental Officer Pola Radomska, Robinson emphasised to all present the urgent need to take action. In the last few years, Robinson has proved to be an unlikely but effective advocate for climate justice both at a domestic and international level. With her stellar human-rights pedigree and chart-topping podcast Mothers of Invention, there are few better placed than Robinson to reflect upon this fundamental issue.

Though doom and gloom headlines about the imminent dangers of climate change dominate, many people remain largely in the dark about the extent of the issue. Confused by the convoluted language of intimidating scientists who prophesise about rising carbon levels and melting ice caps many people just to opt out of responsibility.

The success of the climate-justice movement spearheaded by Robinson has been bringing a human element to the conversation. Calling herself a real “latecomer in terms in the issue of climate change”, Robinson admitted to the audience that for many years she too remained in the dark. Despite her placement in the heart of the UN, Robinson failed to identify the crucial “nexus between climate change and the undermining of human rights”.

Upon attending her first climate change conference in Copenhagen Robinson became wise to how “little discussion there was about people”. Not daunted by the excessive bureaucracy of the UN, Robinson was energised to probe into the human element behind this opaque phenomenon.

When asked by Radomska about lifting the intimidation tag attached to climate change, Robinson advocated for small but significant action. Earnestly addressing the crowd, she said that “everyone of us has to take it deeply personally and do something we have never done before”. She implored the audience to “get angry about those who have more responsibility who aren’t doing enough”.

She spoke about some of the lifestyle changes she herself has made, such as switching to a pescetarian diet and striving to reduce her consumption of single-use plastics. According to Robinson, a vision of the world we want to create should be at the core of society’s efforts. She said that the “world we are moving to has to be a healthier world and fairer world”. Stressing the importance of social cohesion, she affirmed the necessity of co-operation between the developed and developing world.

Consistently pragmatic in her appraisal, she was adamant that this would involve vast changes to many people’s livelihoods. The perverse power of polluting industries such as coal, oil and gas is seen no stronger than in millions of jobs tied up in these corporations. Provisions will have to made for all those who depend upon these industries for a living. According to Robinson, change will have to manifest itself in many ways: through more diversified farming, through a reduction in overall consumption and through the promotion of more sustainable industries.

Considering the scale of the damage to be undone there is an undeniable need for engagement on the part of the youth. Chairperson of the Environmental Society Izzy Jorgensen was keen to ask Robinson about the ways in which young people can take up the mantle of leadership. It was at this point of the conversation that Robinson’s extraordinary breadth of experience and wisdom shone through. Eloquently quoting her esteemed colleague Kofi Annan she affirmed that “you’re never too young to lead and you’re never too old to learn”.

With the powerful tide of young people turning towards activism, Robinson expressed her delight at the intergenerational dialogue this has opened up. There has been an onslaught of children’s marches against climate change in the last month, with outspoken campaigners like Swedish teen Greta Thunberg amplifying the momentum. In particular, university students sit comfortably on a pedestal of privilege, equipped with everything needed to bring about change. According to Robinson, armed with all the knowledge and capacity needed to take a stand, university students have “no excuse” for not taking the issue seriously.

Harking back to her own student days, Robinson reminisced about the issues that ignited her interest in activism. She told the story of how, as Auditor of the Law Society in her final year, she gave a controversial speech about the link between Irish law and morality. Despite being dismissed by an eminent constitutional law expert Robinson was not dissuaded. Inspired by the visible need for change all around her, she called out for fundamental alterations to the Irish constitution with regards to same-sex marriage, contraceptives and the criminalisation of suicide. The taboo that surrounded abortion rights meant that Robinson did not feel able to broach the issue back then. She touchingly remarked that the commitment of Irish young people to abortion reform brought about “a world not only better for women and women’s rights but for humanity”.

Robinson herself has been canny enough to move with the times, embracing the ultimate millennial platform of communication: the podcast. Robinson’s Mothers of Invention podcast has provided her with the perfect forum to forge the link between the stories and the science of climate change. Latching onto the power of humor to engage new audiences, Robinson enlisted the services of comedian Maeve Higgins to co-present the series. If Robinson hadn’t already won over the audience with her wise words, her endearing promise of a new podcast “dropping” tomorrow all but sealed the deal.

The sense of optimism that Higgins and Robinson have managed to bring with their podcast is incredibly admirable.It has allowed them to shed light on the incredible stories of women such as that of the Kenyan pastoralist who stopped the illegitimate construction of Africa’s biggest wind farm.

One cannot but feel inspired by the thought of a Messai tribeswoman taking on one of biggest energy corporations in the world. Drawing once more from her seemingly limitless fountain of knowledge Robinson wrapped things up by quoting another close contemporary of hers, Archbishop Desmond Tutu. When asked how he remains an optimist in the face of adversity, Tutu referred to himself as a “prisoner of hope”.

Branding herself a “prisoner of hope”, Robinson said that hope is the most important thing in stimulating action for climate change. When asked finally about the approach of the Irish government towards climate change Robinson that the recent meeting of the Climate Committee with government ministers is “the beginning of real government attention”.

Rather than stew over the alarmity of the problem, Robinson called for a “moon shot” approach. Drawing a parallel between the way in which John F Kennedy set the ambitious target of landing a man on the moon, Robinson called for more cities to work towards being carbon free. Closing out to rapturous applause, Mary Robinson spoke to future leaders and changemakers and they most definitely listened.