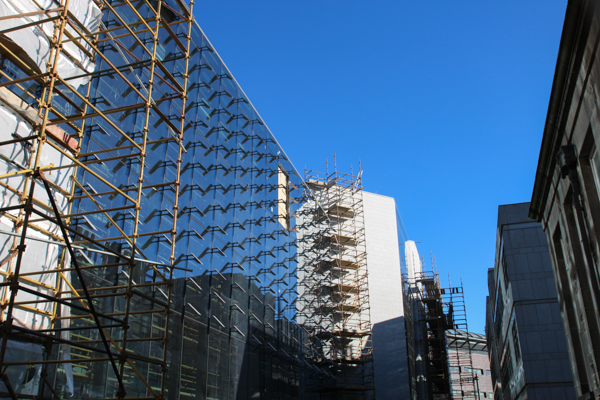 Alana O'Sullivan for The University Times

After years of delays, Trinity’s Business School has encountered yet another setback and will not open until at least May 23rd, The University Times has learned.

The building, which was originally due be completed in 2017, has had its opening date pushed back once again, despite plans for it to be finished this month.

Provost Patrick Prendergast announced the delay at a meeting of College Board earlier this year. The reason for the hold-up remains unclear.

The construction of a new Business School on the east end of Trinity’s campus was first announced in 2013. Initially, the building was expected to be finished by 2017, but disputes with Dublin City Council meant the project was delayed by around 18 months. The council objected to several structural characteristics of the building, including a glass rotunda that they deemed “not an acceptable form”.

During the construction of the Business School, the fate of the buildings surrounding it was called into question, with the Simon Perry Building originally earmarked for demolition.

However, according to the College Bursar, Veronica Campbell, a “misalignment of timing between the progress of the business school and E3” meant the demolition has been postponed until after the completion of College’s new Engineering, Environmental and Energy Institute (E3).

As its opening date has drawn nearer, a clearer picture has developed as to what the Business School will offer to staff and students. The final designs approved by Dublin City Council include a 600-seat auditorium, 140-seat lecture theatre and a dedicated entrepreneurship and innovation hub, which will house the undergraduate business incubator programme Launchbox.

The six-story building will also include a number of smaller classrooms and a rooftop garden. Sodexo, the company behind the Arts Block’s Perch cafe, will run a 300-seat restaurant, named Forum, in the building, which will feature an outdoor seating area and space for a pop-up restaurant.

Green walls are also set to adorn the Business School, which will be verged on two sides with shrubbery, creating two living walls on the building’s facade. One will be visible from Trinity’s School of Botany, while the other will be located on the Pearse Street side of the building.

Speaking to The University Times, Andrew Burke, the Dean of the Business School, said the green walls “will add a nice bit of greenery on Pearse St”.

As part of the Business School’s construction, Trinity is refurbishing rooms on Pearse St in order to create new accommodation that will house 36 students and staff members. It is unclear when the rooms, located in Trinity’s old houses 183 to 188, will be ready to be occupied, as Trinity grapples to create more accommodation for its students amid a city-wide housing crisis.

The Business School is not Trinity’s only new project that is experiencing delays. Printing House Square, College’s new brand-new purpose-built accommodation complex, is also at “significant risk” of being delayed, according to Kevin O’Kelly, the Dean of Students.

Speaking to The University Times, O’Kelly said College’s technical advisers said “there’s a very significant risk that it won’t be finished” on schedule this July.

Instead, the delay in construction could mean that the complex, which will provide accommodation for 250 students and will be the new home of the Health Centre and Disability Service, may not be finished in time to house students before term starts in September.

O’Kelly said that College is concerned that the building may not reach full occupancy if the construction is further delayed, with students finding housing before starting back to class.