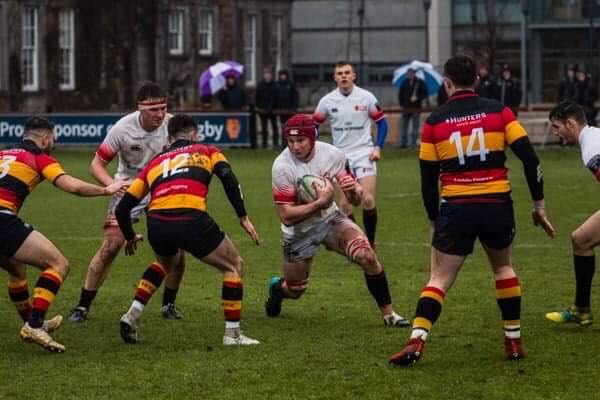 DUFC in action against Lansdowne earlier this season.
Ivan Rakhmanin for The University Times

On Thursday evening, Dublin University Football Club (DUFC) Men travelled to Donnybrook to take on Lansdowne in the Leinster Senior Cup final. Having not won the cup since 1976, Trinity were there to make history. Lansdowne, however, were up to the task and emerged 49-22 victors after racing away in the second half from a Trinity side who will need to improve ahead of next week’s historic AIL semi-final against Cork Constitution.

DUFC, though, clearly mindful of the need to avoid injuries ahead of the semi-final, left most of their bigger names on the bench, and perhaps rustiness played a part in their slow start. Lansdowne began the brighter, their aggression and physicality forced a number of try-saving tackles from DUFC. They were unable to take advantage, however, and DUFC soaked up the pressure. After 10 minutes of defensive rugby, Trinity drew blood at the other end. Winger Cian Crotty chased down a long kick from Trinity’s 22, grabbed the ball after an awkward bounce, and raced in to score the first try of the match. Out-half James Fennelly nailed the conversion, giving Trinity a seven-point lead.

At around the 20-minute mark, Lansdowne won a penalty, from which out-half Scott Deasy found touch inside Trinity’s 22. Now defending close to their own tryline, DUFC looked sloppy and quickly coughed up another penalty. Sensing that a try was coming, Lansdowne won the line-out and, after a few phases, muscled their way over the whitewash. The conversion was good and, after 23 minutes, the teams were all square.

A few minutes after the restart, Trinity were once again pinned back into their own 22, defending for their lives. This time they kept Lansdowne out and, at the 30-minute mark, won a penalty close to the half-way line and within Fennelly’s range. His kick, however, fell short of the posts, letting Lansdowne off the hook.

DUFC were not cowed by this missed opportunity and looked sharp for the final 10 minutes of the half, setting up camp in the Lansdowne 22. Fennelly was given another opportunity to kick at goal. This time the distance was more manageable, and he slotted it over.

Trinity would have been delighted to head into the dressing rooms at half-time with a three-point lead. Lansdowne, however, had other plans. Deasy found touch inside the Trinity 22 and from there Lansdowne’s Peter Sullivan was able to weave his way through the Trinity defence and touch for his team’s second try of the half. The conversion sailed over and Lansdowne went ahead for the first time, a devastating end to the half for DUFC.

Trinity seemed to wilt after the sucker punch of Lansdowne’s second try. Soon after the kick-off, Eamonn Mills extended Lansdowne’s lead with another try. This, however, did not have the desired effect and instead seemed to jolt Trinity into action. Crotty, still on a high after his first try, burst through the Lansdowne defence. Showing some tremendous footwork, he slipped by Sullivan at full-back and touched down for his second try of the game.

Trinity fell asleep after this, allowing Lansdowne to storm down the sidelines. Sullivan redeemed himself after his missed tackle earlier on, touching down to extend his team’s lead. Deasy made the tough conversion to put Lansdowne 28-17 to the good.

Surprisingly, DUFC did not seem too perturbed by these setbacks and stuck to their trademark running rugby. Around the 65-minute mark, on a breakaway off a scrum, a quick interchange of passes between substitutes Ronan Quinn and Rowan Osborne put Quinn in for his first try of the game. The conversion was missed, but the try made the scoreline look a lot more inviting, with only six points between the teams.

But, with just 13 minutes left on the clock, and Trinity in the ascendancy, Lansdowne stepped up their intensity and showed the sort of ruthlessness befitting of AIL champions. Trinity, for their part, capitulated under the pressure, conceding three tries to make the scoreline far more flattering for Lansdowne than it should have been.

The match ended 49-22 to Lansdowne, who were awarded the Leinster Senior Cup. While Lansdowne deserved to win, the scoreline did not reflect the closeness of the game and, for 65 minutes of the match, Trinity looked as good as Lansdowne – something to remember if they come up against them again in the AIL final.

The fact that captain Colm Hogan – who has been an injury concern for the team – on the bench is also a promising sign for the men in red and black. Getting into the Leinster Senior Cup is another indication of how well DUFC have done this season. Whether this will translate into a result in their AIL clash on April 27th, however, remains to be seen.