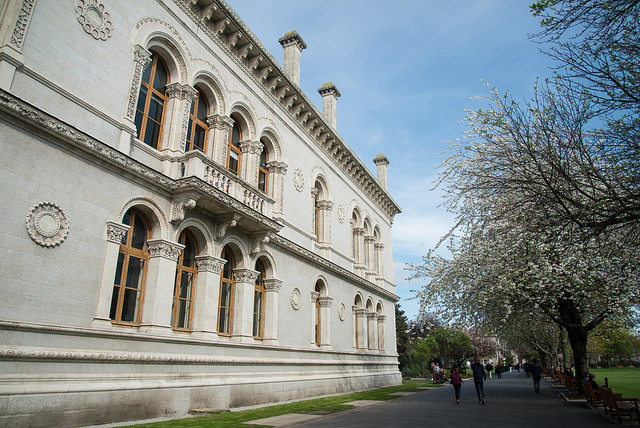 The Museum Building Houses a plethora of hidden gems – including hot chocolate for just 20 cent.
Sinéad Baker for The University Times

Trinity is teeming with useful and appealing secret amenities. Usually tucked away right under your nose, these facilities are well worth getting to grips with. Some will come in handy, while others will be more useful as a piece of trivia to impress your friends with.

To gain entry to this secreted space, where the College holds its oldest manuscripts, one must embark on quite a journey: we’re talking Temple Run-style mazes and obstacles. Having gone down the stairs to the group project space in the Berkeley, you’ll then have to heave open the obscured door at the back, only to go back up some clangy metal stairs before entering a vent-type corridor in which it would be entirely plausible for a chase sequence in the Bourne movies to be filmed.

This labyrinthine entry route serves as the necessary endurance test to gauge if you’re built for the intensity of this library. Bags have to be left at the desk, and you may as well bin the water bottle on your way there. Note that no pens are allowed and if you’re caught using anything other than a pencil you can expect to be chased out. Not only this, but the foam holders for ancient manuscripts can intimidate you out of the place. If you stick it out, however, you’ll be able to enjoy the comfort of the mid-afternoon nap we all want.

Halfway down the stairs in the Lloyd Building (near the Hamilton) are the biggest, most beautiful bathrooms known to humankind, or at least to Trinity students. Spacious enough to host a pre-drinks, and quiet enough to have a loud sob, this is a haven for outfit changes, meditation and cocktail-making.

MacBook Heaven in the Arts Block

If you’re feeling left out about not being part of the Macbook cult in College, we have the solution. The Arts Block houses a computer room filled entirely with Macbooks, which you can use whenever and for whatever.

Sudocrem in the Museum Building

The museum building houses many treasures and interesting artefacts, from rocks to skeletons. However, rather bemusingly, among this trove of valuables is an empty pot of Sudocrem, locked inside a glass case. We don’t know why it’s there, but it’s worth a visit when you need cheering up.

The roof of the Parsons building houses a number of beehives, for reasons equally mysterious and compelling. Although the exit to the roof is potentially alarmed now, that only makes this hidden gem all the more fun to tick off your bucket list.

Another Museum Building gem, this is the sort of secret you want to keep secret because it’s so good. Up the stairs on the right, and through the open arch, you will find the most generous vending machine on campus, offering tea, soup, hot chocolate and a variety of coffees – all for just €0.20.