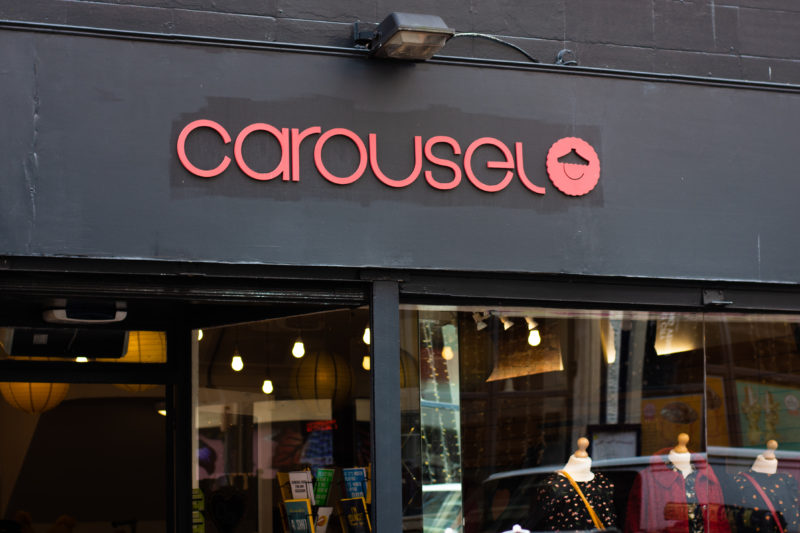 Julia Louis Dreyfus is never far from my mind, but there is one of her sparks of genius in particular that haunts me of late. Playing a vapid, limelight-addicted reality TV star on Saturday Night Live, she nasalises: “We’re also environmentally conscience.” This snippet of Dreyfus’s sharp observational humour seems particularly apt in light of the many endorsements of sustainable living we hear every day that ring hollow.

Take, for example, Gwyneth Paltrow’s recent embarrassing misstep. Readers who are familiar with Paltrow’s brand Goop – and its mission “to push culture forward” – may have witnessed the furore that followed the revelation that the $70 “Crystal Elixir Water Bottle”, toted and promoted by Paltrow, is the product of child labour.

With all the fallacious claims of ethical practice being thrown about these days, you’d be forgiven for having doubts when reading the words “Irish Designed, Ethically Made” in the window of a small boutique in Dublin.

The women of Carousel on Exchequer St, however, would be quick to put your mind at ease. The shop’s clothes are produced in a factory called Good Earth in India. Good Earth has the seal of approval from Sedex, one of the world’s top ethical trade service providers, and is regularly audited. Working conditions are held to a high standard and there are policies in place that deal with safety, sexual harassment in the workplace and environmental protection.

Betty Corcoran, brand manager and one of the designers at Carousel, has been there herself. She tells me this in what she calls “the office” at Carousel, which resembles a well-organised artist’s studio. There’s colour and crepe paper, and a playlist that includes the best of both Lizzo and Kacey Musgraves.

Corcoran has been the brand manager at Carousel for a little over eight months, though she first began working there as a sales assistant nearly seven years ago. She’s now in charge of visual merchandising in the company’s three stores in Dublin, Cork and Galway, as well as buying a few other brands into the stores, such as leather-free-and-beautiful handbag brand Long & Son. Then there is, of course, the small matter of designing the clothes.

I ask Corcoran about her process, and her new line, About Betty, almost immediately. Her initial concept was a character. She built the line around a fictional character of her own creation: Betty. Speaking to The University Times, she describes the character as an “offbeat chick”, the friend “who’s on the phone to you if you’re splitting up with your boyfriend or girlfriend, really chill … and into music”. 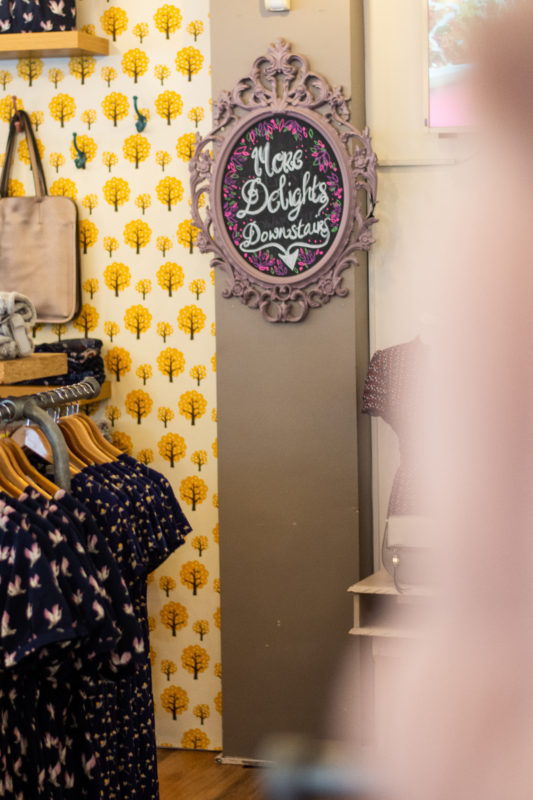 Corcoran says her new line is designed for the friend “who’s on the phone to you if you’re splitting up with your boyfriend or girlfriend”.

Talking about the clothes she envisaged this Betty wearing, Corcoran says she didn’t want them to be the kind of clothes that “overpower you, your personality”. She explains: “You put it on, it complements your shape but also your personality. You put it on and you kind of forget about it. You’re not pulling at it or, like, fixing it or whatever.”

Owning, admittedly, a few of the garments myself, I can attest to the easy wearability of the brand. Unlike Topshop or, well, every other brand on the high street, these are not clothes catering to a single and very specific shape. I, and I speak for myself alone, am not a fan of an uber-high waist. I have a tummy, but H&M doesn’t care that tight high waists hurt my little paunch, so why would they design a corduroy skirt without one? About Betty is flattering to all shapes, as far as I have seen. There are empire waists and shorter hemlines, which make for dainty, sexy, cutesy looks. The line includes sizes extra small to large. The shop’s other homegrown brand, Circus, ranges from sizes 8 to 18.

Corcoran speaks about the line being vintage-inspired. When I ask her if there’s any decade she really can’t stand, the answer is a definite no. Her approach is clearly inclusive and open-minded, and her line will, I’m sure, over the course of its lifetime, include every decade’s greatest hits. She has a great appreciation for both shoulder pads and flares, which, noting the trends for this coming season, makes her one to watch.