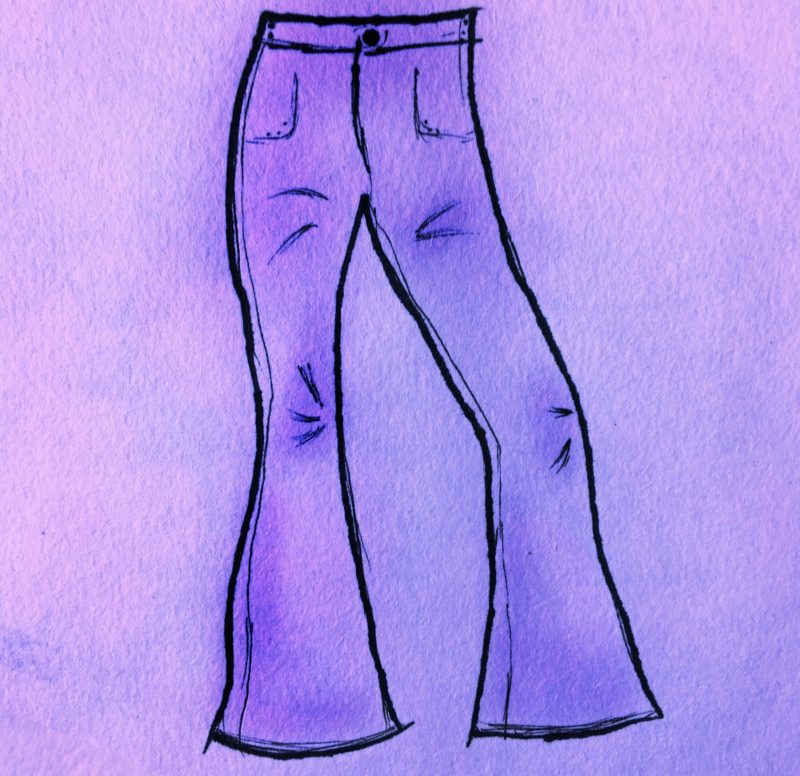 With skinny jeans being the public’s firm favourite for two almost decades – ever since Kate Moss popularised the style in the 1990s – it was looking like the skin-tight jeans were going nowhere. Yet, their day has finally passed and flared jeans have replaced their skinny counterparts. All you have to do is walk through either end of campus and you will find students from both buildings donning a pair of the more relaxed trouser. Arts Block and Hamilton students alike take part in the trend – a rare meeting of the two groups. This could well be down to the fact that flared jeans do not cut off the blood circulation to you calves á la the ultra leg-hugging Topshop Joni jeans of our youth.

From Sonny and Cher to Farah Fawcett, the flared jean is an iconic style of jean widely associated with the flower-power movement of the 1970s. Despite this association with the counterculture, flared jeans were originally worn by a very different group of people. In the early 19th century, the flared cut of jean pants were first worn by sailors in the US Navy because, at the time, the US Navy lacked a standardized manner of dress. The wide-legged trousers could be rolled up easily and were therefore very practical for sailors.

The 1970s saw the garment pass from functional uniform of sailors to mainstream fashion. The counterculture youth of the 1970s had begun to reject anything that had to do with convention – especially when it came to fashion. This included not only clothing itself but also where one shopped.

Disillusioned with the department stores favoured by their parents, young people of the 1970s began shopping at army surplus stores. As more people began to buy from these stores, the flared trouser from Navy uniforms became a wardrobe staple. This style was a huge hit among both men and women, as the cut was a huge departure from the straight-leg styles that permeated the runways, department stores and the older generations.

Whilst the cut of jean may no longer be used by the youth as an expression of one’s political views, in recent times, the jean has recently found a place in the wardrobes of many Trinity students.

The source of the cut’s popularity lies in its comfort, making it a quick and easy way to update a wardrobe. Most people tend to wear jeans to college as they are a practical choice for days spent in lecture theatres and staring at your library bae. Flared jeans allow you to add something different to your bottom half without giving up the comfort and familiarity of the trusty trouser.

If you want to further amp up your fashion-forward vibes, a popular choice when opting for the style is ankle length pair of flared jeans with a raw hem. The shorter length means that you are not swimming in material but still enjoy all the benefits of the jean. Pairing the jeans with a t-shirt and blazer gives extra on-trend vibes. All that’s left is to go forth and strut down the corridors of the Arts Block because we all know they are the real-life versions of the catwalk. Long live the Flared Jean.