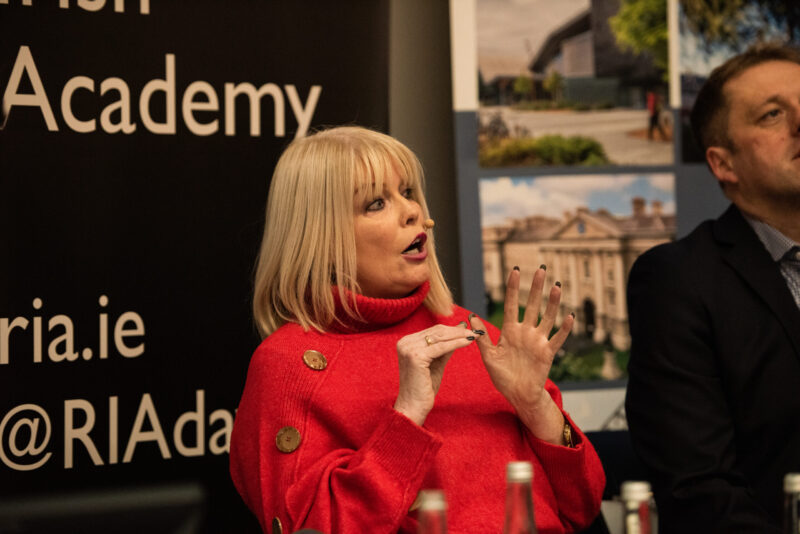 Higher education’s Cassells report came under scrutiny this afternoon at a third-level education debate held in Trinity, with politicians of all hues quarreling over funding during a discussion that saw more arguments about figures and statistics than the ideas underpinning the future of the sector.

The seven speakers at the debate – held this afternoon in Trinity’s Business School – were more closely aligned in their ideas and proposals than their demeanor suggested, with few cutting through in a debate that’s unlikely to have offered great reassurance to the sector’s key stakeholders.

In a packed-out lecture theatre, Sinn Féin’s pledge to invest €170 million a year in higher education might have made for an appealing pitch, but the abiding memory for many will likely have been the gloves-off clashes between Fianna Fáil education spokesperson Thomas Byrne and Minister for Higher Education Mary Mitchell O’Connor – albeit with few revelatory moments.

Mitchell O’Connor came in for stiff questioning about her record as the country’s first minister with responsibility for higher education, and came armed with a raft of figures to defend the government’s spending. She argued that “nobody talks” about the €1.88 billion spent on tertiary education, and frequently sought to turn the conversation towards apprenticeships and further education.

But for most, the figure that endures will have been the one read out by host Shane Coleman: the 40 per cent reduction in funding per student over the last decade.

And if higher education’s role in the election has been peripheral so far, then today the terms of debate were clear early on: Provost Patrick Prendergast was unambiguous in his assessment of the “crisis” facing the sector. “We have the resources”, he said, in an arch opening statement. “But do we have the leadership?”

Mitchell O’Connor sought to cast doubt over the efficacy of the Cassells report – long accepted as the blueprint for higher education’s future – raising a gasp from the room when she argued: “Everyone talks about it like it’s like the Bible, but nobody has read it.” She also pointed out that the report doesn’t take into account the revenue that universities bring in from lucrative non-EU student fees.

And there was little disagreement, particularly among the parties tacking left, about the severity of the crisis. Boyd Barrett, fresh from a strong showing last night at RTÉ’s leaders debate, delivered an assured performance that poked holes in the government’s decisions on higher education. Horses, he pointed out, receive higher average grants than students.

Hourigan and Ó Maoláin, for their part, struggled to capture the ground on the left occupied by Boyd Barrett – though Hourigan garnered attention for her claim that the country needs to start preparing for green jobs – while Bacik was clear: option one in Cassells is Labour’s priority. Of the three politicians representing Ireland’s centre-left, Bacik’s address was the most impactful.

For a party flying so high in the polls, Sinn Féin’s contribution to the debate was notably light, with Ó Laoghaire failing to land a telling punch on Byrne and Mitchell O’Connor. He did, however, get a positive response for his criticism of postgraduate working conditions.

After arriving late, Byrne delivered a predictably full-throated attack on the government’s record. But those present often punctured the ambition of his promises – Bacik drew a laugh when interrupting his description of “what Fianna Fáil has done over the years”. “We know what you’ve done over the years”, she said.

For Mitchell O’Connor, the core pitch comes down not to funding but to technological universities. It’s prominent on her party’s manifesto, and it was the topic she was the most comfortable discussing today. “We are pushing the technological university model”, she told an audience member, “so education can be delivered in your regions”. But in a room full of people who seemed most concerned by funding, it’s not clear whether her pledge will have done her many favours.

Similarly, Fianna Fáil’s flagship promise – a new department for higher education – received more scepticism than support, with Mitchell O’Connor pointing out that constitutionally, introducing a full cabinet department would require abolishing another position. Other speakers didn’t seem to see it as an effective way of tackling the funding crisis – Ó Laoghaire cited the Department of Housing to show that creating new departments doesn’t address funding issues.

Bacik touched a nerve when she pointed out that the government’s approach to funding, through the Human Capital Initiative, could see the “death by stealth of the arts and humanities”.

And the importance of research – something flagged by Prendergast in recent months – came up among audience members when one asked about how to fund blue-skies innovation as opposed to business-linked research. Ó Laoghaire argued that “STEM benefits businesses”, but admitted that “there has to be space created for blue sky research”.

Questioned on measures to increase funding for blue-skies research, Boyd Barrett did not hold back in criticising the “marketisation” of research from philanthropy and industry.

“We need to break the marketisation of education and research, basically”, he said. “If we don’t have enough public funding, you’re forced to go to philanthropists and businesses who dictate what sort of research you do.”