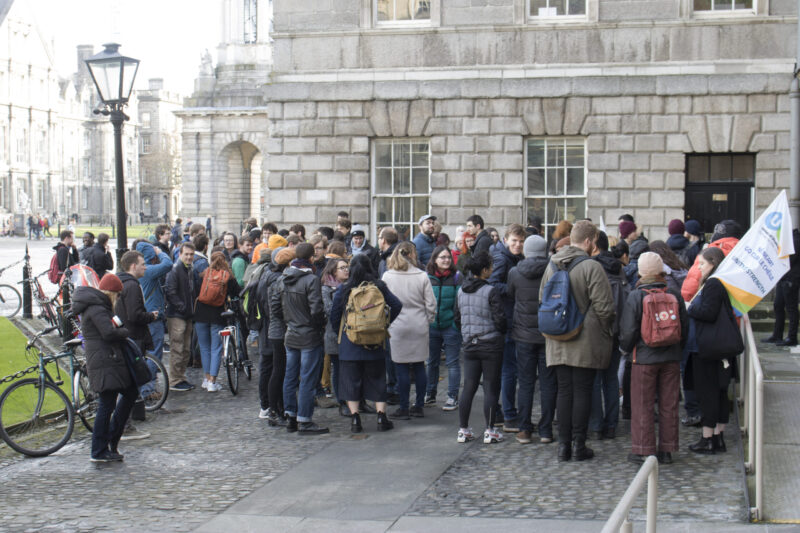 Nearly 80 students and staff members gathered at House One this morning, coinciding with a meeting of the College’s Finance Committee, to protest a decision that could see their teaching pay cut by nearly 20 per cent.

The morning after the move was first revealed by The University Times, postgraduate students gathered outside the building where Finance Committee meets, chanting “postgrad rights are workers’ rights, workers’ rights are human rights”.

The students – joined by representatives from the Union of Students in Ireland (USI) and Trinity College Dublin Students’ Union (TCDSU) President Laura Beston – greeted members of Finance as they entered the building, calling: “Please don’t cut our pay!”

Speaking to The University Times, Shaz Oye, the president of the Graduate Students’ Union (GSU) – who sits on the committee – said the union “dissents to” the decision.

“It’s really sort of shocking that TAs and demonstrators – who are on minimum wage to begin with, and rely heavily on that, because of cost of living, to literally feed and clothe themselves – that those rates that they’re paid for demonstrating and as teaching assistants is cut”, she said.

Last night, Oye told The University Times she had missed the decision – which was approved as an item for noting, and did not come up for discussion at the committee – when it was approved in November.

“I want to say to all of my members who are concerned about this, I missed it – hands up, I missed it – and I apologise for that”, Oye said last night. “It was a handful of lines in nearly 300 pages of documentation.”

Today, USI Vice-President for Campaigns Michelle Byrne told The University Times that “postgrad rights are also workers’ rights, so we need to make sure we come out strong against this – as students’ unions, and as trade unions”.

Sara Dowling, USI’s vice-president for postgraduate affairs, called the move “disgraceful”. “Absolutely, we are not in favour of any pay cut to workers”, she told The University Times. “We think it’s disgraceful and it should have been communicated properly to the community long before now.”

Speaking to The University Times, Katarzyna Siewierska, the physics representative for the GSU, said the cuts were “a disgrace”.

“The postgraduate students have really low stipends”, she said. “The stipends that we are getting have not changed for 10 years. That’s of course not the college’s fault, that’s the government’s fault, and with the elections in the background we should be lobbying more for third-level education funding. But, for the moment, the College has approved these new rates .”

Speaking to The University Times, TCDSU President Laura Beston said: “I think it’s really important that the finance committee have a robust discussion about this and actually listen to postgraduate workers and acknowledge these are people’s rights and right to work and these are not just issues to be swept under the rug.”

Speaking to the crowd, Siewierska said: “Shaz is in there right now, making noise, while we make noise outside.”

A town hall meeting has been organised for tomorrow to discuss the issue.