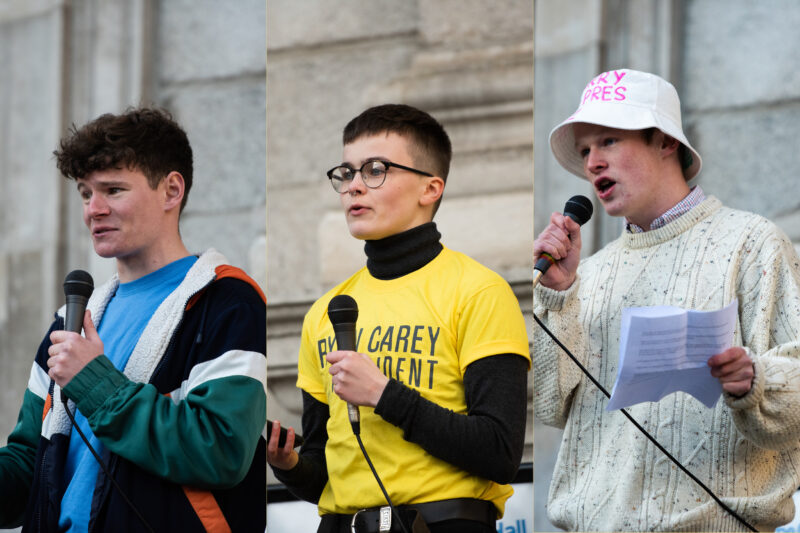 This year’s Trinity College Dublin Students’ Union (TCDSU) election campaign kicked off in the middle of a bitter rainstorm – perhaps a portent of what’s to come, given that this year’s presidential race will likely offer exacting debate of issues long accepted as the union’s governing principles.

This year’s lineup contains both veteran union figures and unapologetic outsiders. And, if today’s hustings didn’t bring candidates’ differences into sharp relief, given the lack of student engagement, then the next two weeks are likely to herald debate of a character we haven’t seen in recent times.

On today’s evidence, this year’s presidential race looks set to be one of the most interesting in years – with accepted truths about the union’s role set to come under rare scrutiny.

Unsurprisingly, Ryan Carey, the candidate with the most union experience, was relatively uncritical of TCDSU as it stands. In a veiled jibe at his fellow candidates – both of whom are likely to criticise attitudes viewed as “establishment” – he stressed that the president is both an operations and campaigns manager, hinting that his vision for the role isn’t necessarily a radical one.

Eoin Hand is an interesting proposition. In most years, he’d be viewed as an anti-establishment candidate, given his lack of union involvement, but this year that title will almost certainly go to Harry Williams. For Hand, the challenge will be carving out a niche – a “third way” – between two candidates at opposing ends of the spectrum. And he made a good start today, rattling off a long list of issues that affect students and treading the line between local and national issues. He’ll likely be pushed more over the week on where he stands when it comes to the union’s role – micro or macro.

Williams is clearly a candidate with few doubts about what he thinks the union should look like – or at least for what it shouldn’t. He didn’t hold back in a speech that set him out as the anti-establishment candidate in this year’s race. A TCDSU president, he offered, should be someone “you can go for a pint with”, and he also made no bones about his belief that the union should leave the Union of Students in Ireland – for financial reasons. But given how little USI costs individual students, it remains to be seen whether voters will buy what he’s selling.

In a race that looks set to become highly divisive, it seems that when students choose their side they will not just be voting on who they want as president, but on the future of the entire union.

Following a two-horse education race last year that was nip and tuck throughout, this year’s contest looks set to be a much more subdued affair, with final-year general nursing student Meghan O’Connor battling it out solo.

O’Connor’s down-to-earth speech reflected her main objective: bringing the union back to basics. Relying on her experience as off-campus officer as evidence of her ability to bring a fresh approach to a campus-oriented union, she voiced her three main goals – accessibility, engagement and student support – with vigour.

While O’Connor’s promise to increase the union’s approachability offers nothing novel, her grand plan to implement a buddy system could raise a few eyebrows. Given its similarity to the S2S system, it’s likely she will face questions about whether the juice is really worth the squeeze.

O’Connor is on surer footing in her promise to troubleshoot the bane of many students’ lives: Erasmus administration. O’Connor was visibly frustrated by her own “stressful” experience, lamenting the fact that there are “an awful lot of the deadlines fall right before Christmas exams, which I don’t think is fair on students”.

O’Connor, who declared that “I believe in my manifesto and believe that I can implement it in the first 12 months of the role”, is certainly setting her sights high. But it remains to be seen whether she will maintain so confident when faced with more intense scrutiny alone under the spotlight.

Sole welfare candidate Leah Keogh largely stuck to the script, and to her manifesto points, though she did launch a precise appraisal of accountability within the union – a surprise turn in a speech that mostly remained true to previously expressed promises.

It’s clear now that Keogh’s flagship policy will be her approach to student finance. While she hinted that these issues would form a key topic in her election bid in an interview with this newspaper last month, today’s speech offered more concrete plans when it came to addressing sources of financial hardship. Citing the €385 late payment fine incurred for delayed tuition fees, she pledged to tackle “the college structures that don’t serve students”. She also vowed to work with Academic Registry in an effort to offer a “more accessible fee payment plan for Trinity students”.

When candidates run alone it can sometimes be easy to accuse them and the union of skirting accountability, but Keogh headed off any potential criticism by proposing an “anonymised annual report” that she said will allow students – and not just newspapers, she joked – to hold TCDSU accountable.

In her interview with this paper and in today’s hustings, Keogh has skilfully shifted the terms of debate when it comes to how the union talks about welfare, without subjecting the status quo to much criticism. Given her novel approach and unusual promises, it will be interesting to see whether she decides at any point to criticise the union’s current approach to student welfare.

Following a competitive three-candidate race last year, this year’s sole Ents candidate Hugh McInerney will face much less questioning than his predecessors, a feature that came across today in his lighthearted speech. McInerney sought to take advantage of his status as an online institution with his Trinity Truths page, in a speech that at times seemed more like a comedy sketch than a pitch for students’ votes.

McInerney, though, did hit on his experience in societies as evidence of his ability to make ambitious plans – like his sober October campaign – happen. A Berlin trip he organised with DU Film Society, he said, shows his ability to fulfil the bread and butter demands of his role: organising successful events.

Ents candidates consistently face questions about the alcohol-centric focus of many events, a culture McInerney seems notably keen to upend. His sober October, including film screenings and sumo wrestling, was an impressively fleshed-out vision of why “you don’t need alcohol to have a good time”.

In an uncontested race, it is unlikely that McInerney will face many probing questions throughout his campaign. However, with limited ents experience outside of Film Soc, it remains to be seen whether he can offer a full-colour vision of what the role could be.

If the candidates for communications and marketing were expecting a soft opening to their campaigns, their pitches were interrupted by a vicious burst of rain. But Hiram Harrington and Philly Holmes didn’t reinvent the wheel: both stuck to points they’ve made in manifestos and interviews with this newspaper. The candidates delivered strong – but notably short – overviews of their visions for the role.

Little separates the two candidates, who were both keen to emphasise their vast experience with society life. The two hopefuls are focusing their campaigns on targeting the union’s engagement problem, with Harrington noting a need to “increase the outreach” of TCDSU.

Holmes perhaps had the edge on Harrington – in terms of confidence, at least. He promised to make practical and attainable changes to the role, and criticised the lack of a “digital presence” within TCDSU. Harrington, though, shone most when speaking about their experience as a DARE student. “As a student who has been linked with the disability service from day one, I have seen the problems a lack of accessibility causes”, they said – a line that could land among students over the campaign.

For both Harrington and Holmes, the race will likely be a contentious one. With both candidates mirroring each other’s policies, they will at some point need to veer away from campaign promises and cliches. Then, perhaps, we will start to see fault-lines appear in this race.

In a race that has never before seen genuine competition, the candidates for Editor of The University Times both gave convincing speeches – albeit in strikingly different ways. Susie Crawford and Cormac Watson will be pushing different messages over the next two weeks, and we caught a glimpse of that today, with both emphasising their strengths while trying to mitigate any negative narratives that could spring up against them.

Crawford made no bones about addressing the elephant in the room when it comes to her candidacy, seeking to make a strength out of her relative lack of experience when compared to Watson. She’s not been deputy editor, she admitted, but argued that this gives her a different, fresh, perspective. Crawford didn’t hold back in her criticism of the paper, either, singling out its lack of outreach as a “tragic” failing in a particularly exacting reproval. “The best thing about The University Times”, she added, “is not the content it produces, but the opportunities it provides for students”. Amping up a promise made by Watson last month, she promised to cut the paper’s print run by 40 per cent, and vowed to carbon offset her campaign.

Watson, unsurprisingly, emphasised heavily his experience working in The University Times over three and a half years. The “thousands of hours” he has put into the paper, he said, equip him with the skills to lead the paper – and to be someone younger writers can turn to for advice. He also argued the paper needs to do more to tackle the climate crisis, and namechecked accountability as a major issue for the paper that he wants to solve, in a speech that stuck largely to the script.

This race will likely see both candidates discussing experience a lot – with both attempting to make a virtue out of their record. It will be interesting to see if voters plump for Crawford, a newcomer in relative terms, or Watson’s experience in high-level roles.

Correction: 22.05, January 17th, 2020
An earlier version of this article inaccurately quoted comments made by Susie Crawford, a candidate for Editor of The University Times. The article quoted Crawford as “singling out the paper’s “tragic” lack of outreach in a particularly exacting reproval”. In fact, Crawford said the paper’s lack of outreach is a “tragic” failing, and added: “The best thing about The University Times is not the content it produces, but the opportunities it provides for students.”