It’s 7am on July 19th, 2019, and instead of dragging myself out of bed and into work, I’m at the Pav. Well, I’m behind the Pav, liaising with an array of men wearing high-vis vests, eating fried breakfasts, smoking cigarettes and assembling complicated gear. Filming for the BBC adaptation of Sally Rooney’s Normal People is underway, and it looks much more like a building site than a glamorous film set.

Trinity students have spent the last three years talking about Rooney’s work. Her subject matter is young, exciting and undeniably sexy. Of course, we all know that Rooney’s novels are acclaimed, but half the population of College is convinced that the writer is overrated. The other half is certain that she’s the voice of a generation. You’d think that we’d be bored of obsessing over the writer by now, but judging by hype on Twitter, it seems like all 17,000 of us will be tuning in next week (when the show finally airs) to catch a glimpse of Connell and Marianne in the flesh.

Behind the Pav on that rainy morning in July, a member of the construction team echoes my thoughts: “It’s a different little world, this. People don’t know what it’s like. You know what a hospital looks like because you’ve seen it on TV, but this is different. People never see this.” He’s right. Behind the scenes of the BBC series, I really do feel like I’m in a parallel universe. I’m encouraged from all directions to take advantage of the free food and drinks. This isn’t the Trinity I know, with its €3 coffee and queues of tourists.

Trainee assistant director Megan Kennedy is tasked with looking after Paul Mescal, who plays Connell. She’s also tasked with looking after me. It’s still pouring rain, and it’s essential that Mescal doesn’t get wet. It would ruin continuity. Kennedy and I, therefore, spend a significant amount of time looking for Mescal, finding him and then sheltering him with an umbrella.

For this scene, Mescal has to walk from the 1937 Reading Room to the ramp outside the Arts Block. While this scene, which features only the back of Mescal’s head, may sound simple, it actually takes five takes and 40 minutes to get the perfect shot. These things take time, especially when there are hundreds of tourists milling around, asking: “Is this for Love Hate?”

You know what a hospital looks like because you’ve seen it on TV, but this is different. People never see this

“We’re changing Paul”, Kennedy shouts every once in a while, making a beeline for Mescal with her umbrella erect, ready to rush him to wardrobe. It’s bizarre to see anyone care about the location and state of dress of another person like this. But Kennedy is one of about 100 people on this set who revolve solely around a leading actor. Just as the book follows the lives of Connell and Marianne closely, the enormous cast and crew on set seem to orbit around Mescal and Daisy Edgar-Jones, who plays Marianne. Throughout my time on set, I’m constantly reminded that, no matter how many moving parts there may be in this production, Mescal and Edgar-Jones are at the centre of this universe.

A few weeks later, back on set, Kennedy and another trainee assistant director, Molly O’Grady, run back and forth all day, protecting Edgar-Jones and Mescal from the sun this time. They must ensure that the pair don’t get sunburnt. At all times, trainee assistant directors are using umbrellas to shade the pair, or they’re setting up chairs for them to sit on, or they’re fetching bottles of cold water for them. A medic walks around, spraying sunscreen directly in the faces of the actors. Mescal and Edgar-Jones are gracious, never forgetting to say please and thank you.

It’s bizarre to watch. Indeed, as Mescal stands, having a cigarette, moments before he is due to be on camera, three women approach from different angles. The first begins to touch up his makeup, the second puts a hoody on him, then a jacket, then ruffles his hair at the back, and the third whips an electric razor out of her bum bag and begins shaving his face.

All the while, Mescal smokes his cigarette and seems totally unperturbed. While I’m watching this surreal encounter take place, a member of the makeup team confirms what I already know: “There’s a lot of ‘hurry up and wait’.” 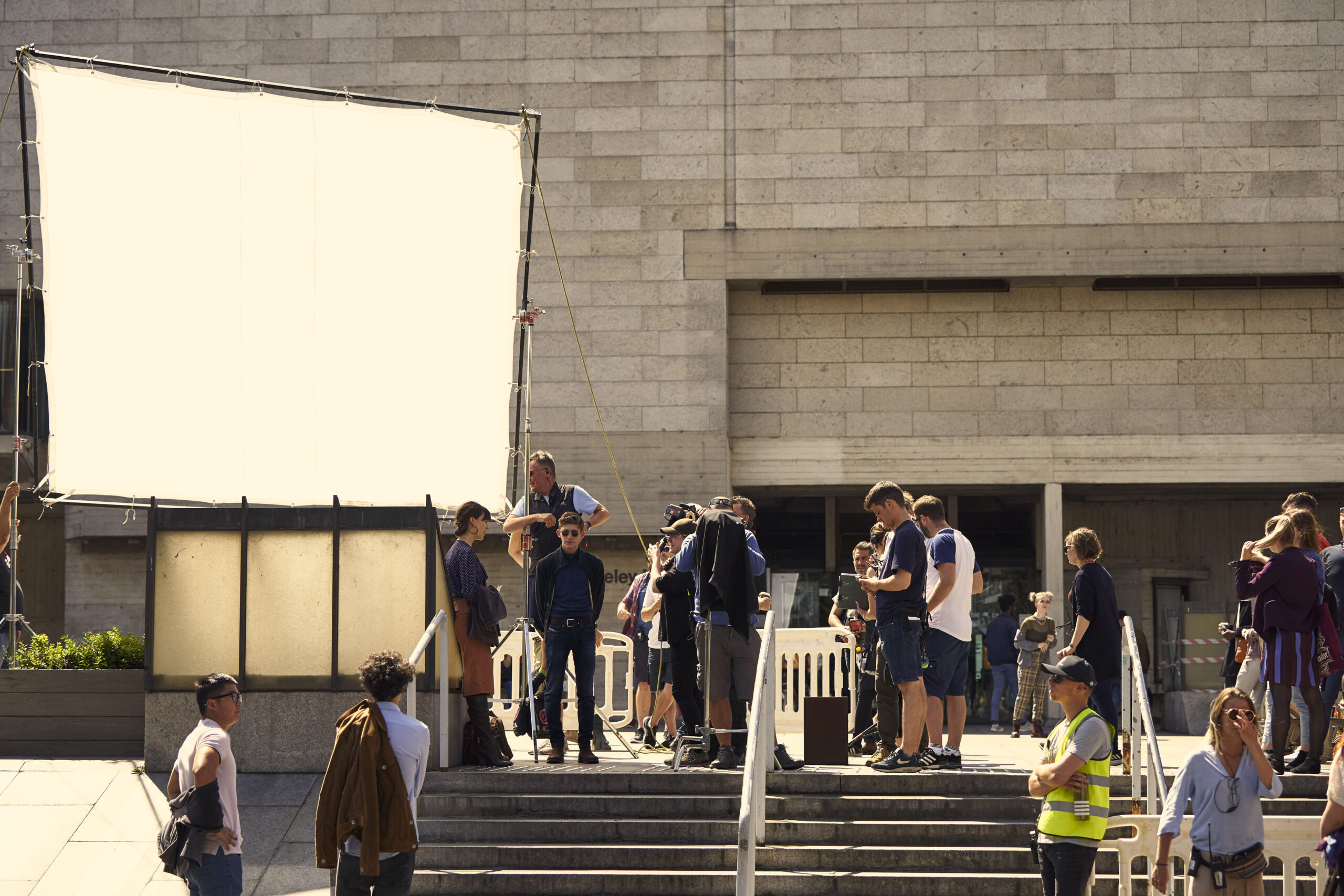 There’s an endless number of moving parts involved in the production.

There are so many moving parts in this production: makeup, hair and wardrobe teams, at least five assistant directors, a construction team, including riggers, builders, painters and trainee opposites of each position (this team tell me that they constructed Connell’s childhood bedroom in the middle of a school sports hall), a man who was imported from England solely for his expertise in body camera work – the list goes on.

All of these people are, as you’d imagine, waiting around for large parts of the day. If the makeup team is working on Mescal’s stubble, or if the wardrobe team is tweaking his outfit, then the entire camera crew – dozens of people – must wait.

Because there is so much waiting involved, I get the chance to hang around the cast and crew, observing them while they’re not working. I’m relieved to find that the vast majority of the people on set seem to be primarily interested in two things: cigarettes and Love Island. I overhear a conversation between a group of very senior camera operators that begins with: “OK, who saw Love Island?” and ends with: “She’s a stupid bitch, she cannot go back to him.” Despite the inherently high-brow energy of this BBC, Sally Rooney crossover production, Maura Higgins and her bold antics have a great deal of presence on this set.

There are moments of downtime, however, that reveal the cast and crew’s sincere appreciation for Rooney’s work. At lunchtime, we all laze on the cricket pitch, eating free food and smoking. Actors and crew members listen as an assistant director reads aloud from a copy of Conversations with Friends, and the group responds with thoughtful comments and theories about Normal People as a prequel to Rooney’s first novel.

It’s an ethical thing. You’ve a choice – you can behave like a child and externalise all your frustration, or you can be an adult

At this point I realise that everyone here is a true fan of Sally Rooney. Each person has something impassioned to say about Rooney’s work. Catherine Magee, a producer, comments on Rooney’s mass appeal and success: “The way she appeals to so many people, through so many age groups – she just appeals to every generation.”

Despite the amount of time spent waiting around, the atmosphere on set is decidedly manic. The drone of walkie-talkies provides a consistently intense aural backdrop. People can be seen sprinting across campus, frantically speaking into their walkies or shouting instructions at extras from a great distance. Amazingly, Lenny Abrahamson, the Oscar-nominated director who directed six of the series’ 12 episodes, remains calm throughout. He’s always offering gentle instructions to actors and assuming responsibility when things don’t go right.

He’s filming outside the Berkeley, and the scene appears to be quite straightforward – Marianne and Jamie are having a cup of take-away coffee. There is, however, clearly some trouble getting the perfect shot. The trainee assistant directors are on high alert, replacing the actors’ coffees with fresh, hot ones every 10 minutes to ensure that the steam is visible on camera. Abrahamson, instead of losing his cool, gently adjusts his directions. “My fault, my fault. Sorry, I didn’t explain that properly”, he says before delivering new instructions.

Abrahamson tells me, of his gentle approach to direction, that “it’s an ethical thing. You’ve a choice – you can behave like a child and externalise all your frustration, or you can be an adult”. 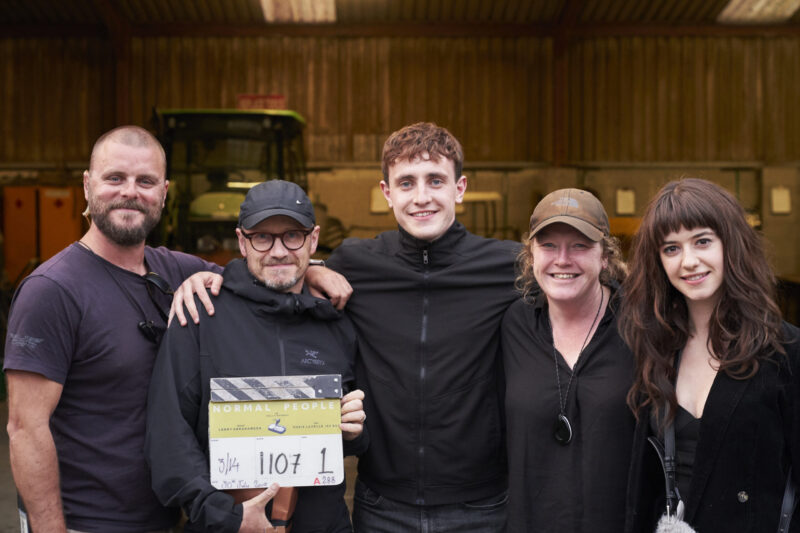 Lenny Abrahamson, a member of the construction team says, “is not normal” when it comes to directing – he’s unfailingly considerate.

Photo provided by the BBC

Throughout the process, the director is unfailingly considerate, and the cast and crew are acutely aware of this. A member of the construction team tells me that “Lenny is not normal”. His approach to direction is significantly less severe than other directors in the business, I’m told. This is perhaps most clearly evidenced in his working relationship with Suzie Lavelle, the head cinematographer on set.

Though Abrahamson is the big name associated with the TV show, it’s clear that Lavelle has her say in every scene. Abrahamson is always asking for her advice and insight, and he always listens. Often, I hear him saying: “You were right about that, Suzie”, or “Suzie, which scene do you want to shoot first?”. At one point, they say “I liked that” in perfect unison.

Mescal and Edgar-Jones, too, are clearly a dynamic duo. The pair lie together outside the Berkeley on one of those big ugly triangle structures, laughing at something. A member of the crew approaches Mescal and Edgar-Jones as they lie in the shade and shows them something on her phone. “Paul, look! There’s a cute picture of us!”, laughs Edgar-Jones. Mescal replies: “Yeah, for once in our lives, like”.

Abrahamson tells me the chemistry between his two leading actors was key in the filming of the show: “They love the jousting that they do with each other, and they’re brilliant collaborators for that reason.”

It’s bizarre to see the Berkeley Plaza and Front Square as backdrops on a TV set, but nothing compares to the sense of unreality I feel as I sit in the Berkeley surrounded by 100 members of cast and crew. It’s the hottest day of the year, filming has been going on for eight hours, and Mescal has been in his “winter wear” the entire time. He is given two electric fans to choose from and a trainee assistant director gets him a cold Coke Zero. 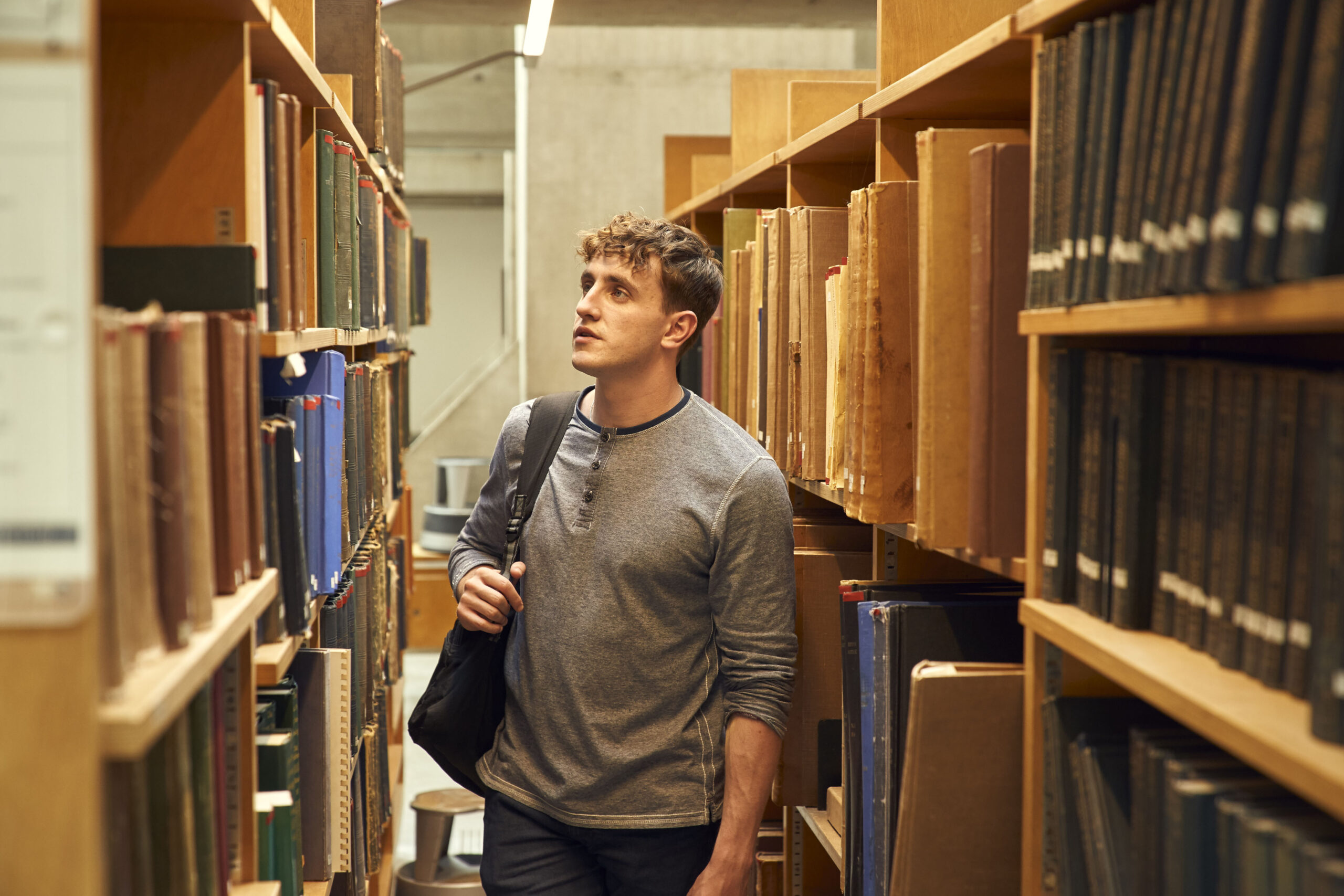 In the Berkeley, Mescal is pictured studying – a shot Abrahamson set up in his favourite spot in the library.

He chooses the blue fan to air dry his sweat-soaked hair.

We’re in the library to get a shot of Mescal studying, and I later learn that he has been deliberately stationed at Abrahamson’s favourite spot in the library. A Trinity graduate, Abrahamson explains how his time at College informed this specific shot. “I loved sitting on the top floor of the Berkeley, and we put Paul in the seat that I used to sit in, and it was just so nice to film another person sitting there. That was a lovely completion of a circle for me, somehow.”

For Abrahamson, filming at his old college is “weird”. For me, seeing the inside of the library as a TV set is somehow unreal. Doubtless, for all Trinity students, past and present, viewing the show will be an unusual experience.

If, when the show airs, you don’t recognise Rooney’s serious, romantic Trinity, just remember that every single person involved in the making of the show spent numerous hours lying on the cricket pitch, smoking cigarettes and talking about Love Island. With that knowledge in our minds, hopefully we can all identify with the TV-ready version of College on screen.

Photos for this article were provided exclusively to the The University Times by the BBC.