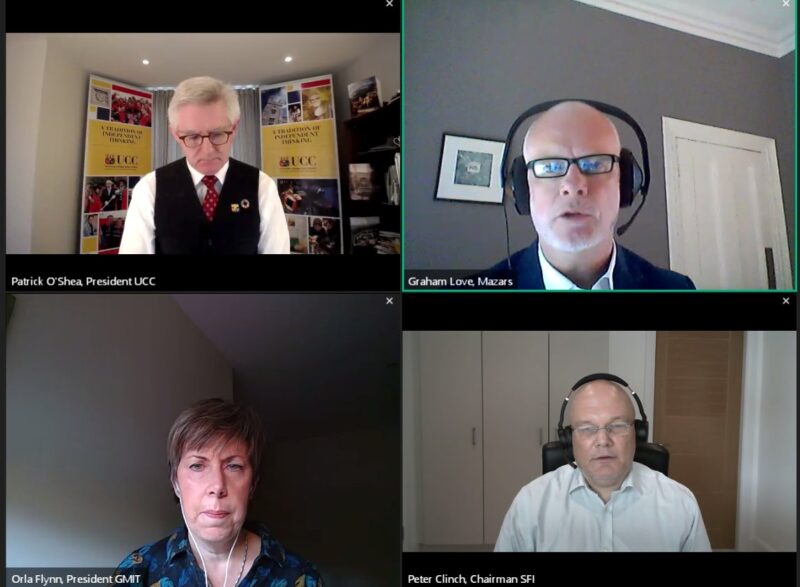 Irish universities will struggle to “compete” in the sphere of online learning when it comes to attracting students over the coming years, a top research official has warned.

Peter Clinch, the chairman of Science Foundation Ireland, said the “centralised” approach to administrative and technical support of Ireland’s universities means it will be difficult for them to implement “blended learning” – a combination of online and in-person learning – in the coming months and years.

He also urged higher education’s stakeholders to utilise three “pillars” – housing, health and employment – to demonstrate to the government the value of funding higher education and research.

At a webinar hosted by professional services firm Mazars Ireland, Clinch – alongside University College Cork President Patrick O’Shea and GMIT President Orla Flynn – discussed the future for Irish higher education and the risks it faces when it comes to attracting government funding amid an impending economic downturn.

Clinch, the chair of public policy in University College Dublin (UCD), said that “in the next couple of years, if we think we’re going to be able to compete online and with blended learning, we’re really going to struggle in the Irish system – and that’s a big threat”.

He said the centralised nature of IT support in Irish universities means it will be difficult to put in place a system of online learning that will attract students.

At a talk chaired by Graham Love, a partner with Mazars Ireland and a former CEO of the Higher Education Authority, the three panellists all accepted that online teaching – in some form – is here to stay. “We have to look at this as potentially long-term”, said O’Shea, while Flynn raised concerns about IT equipment and poor internet for students when universities bring in remote learning.

But all three agreed that online teaching by itself won’t work. “Pure online doesn’t cut it”, said O’Shea, who added that “we still have to compete internationally”.

In an online talk with nearly 500 attendees, government funding – for years now the albatross around the sector’s neck – was predictably front and centre, with discussion on how third-level can effectively make the case for state investment if resources become scarce.

It wasn’t surprising that O’Shea and Flynn argued that their institutes are central to the success of Ireland as a society – Flynn said institutes of technology “are deeply engaged with communities in which we sit”, while O’Shea said that the risk of a funding drop-off is “existential”.

“Without government intervention, without investment, I worry”, he said. “What will happen to those students who are passing through the leaving certificate system right now?”

Clinch added: “It’s impossible to stay competitive if we let it slip like this.”

He said lobbyists for third-level must show immediate contributions that higher education can make to Ireland as it attempts to restore normality in the aftermath of the virus, as well as forcing politicians to confront the question: “What will happen if we don’t invest in them?”

“It’s about looking at what incentives the politicians face”, he said.