Radical change is not for the narrow-minded or weak-hearted. Whether protests are large or small, domestic or international, we cannot underestimate their cataclysmic power – a fact that students have, historically, been attune to.

Today, Ireland proudly displays its unique artistic contributions to the world, but that wasn’t always the case. For many years, it kept its windows shut to the rapidly evolving world of the international arts scene.

In 1971, though, those windows were forced open – and students in Ireland’s National College of Art and Design (NCAD) were at the centre of it.

Joan Fowler, a former lecturer in NCAD, tells me that “institutions are notoriously incapable of self-critique and self-reform. NCAD is a shining example”. In the 1970s, NCAD – then known as National College of Art (NCA) – was the only third-level educational institute whose administration was directly funded and controlled by the Department of Education. In the hands of civil servants rather than educationalists, students felt that its development had been grossly stultified.

Institutions are notoriously incapable of self-critique and self-reform. NCAD is a shining example

Since its establishment at the end of the 18th century, Dublin’s main art college had received subsidies from the state. In turn, its function calcified to serve the needs of the beneficiaries of colonialism in Ireland – the British, the Anglo-Irish and the upper-middle class.

By the middle of the last century, students wanted NCA “to get out from underneath the yoke of the Department of Education and have its own governing body”, according to Martin Gale, a student at NCA at the end of the 1960s. He says that he spent more of his time in college sitting outside in protest than in.

As the Department of Education passed through a series of ministers, it began to look increasingly stagnant against an arts scene that was embracing progress. Dozens of reports blamed the department for the “dead hand of the college”, and for overlooking the rapidly modernising tendencies of the Irish arts industry. Gale tells me that he was aware of the global “explosion in visual awareness. Graphic design was everywhere – bags, books and records had covers with real artwork on them”.

Meanwhile, NCA “remained in the 19th century”, according to Gale.

From the mid-1960s, student protesters in NCAD were fighting for a “worthwhile” college of art. Students campaigned for the establishment of a democratically controlled college that would be “national” only in the sense that it would contribute to the cultural wealth of the whole country. 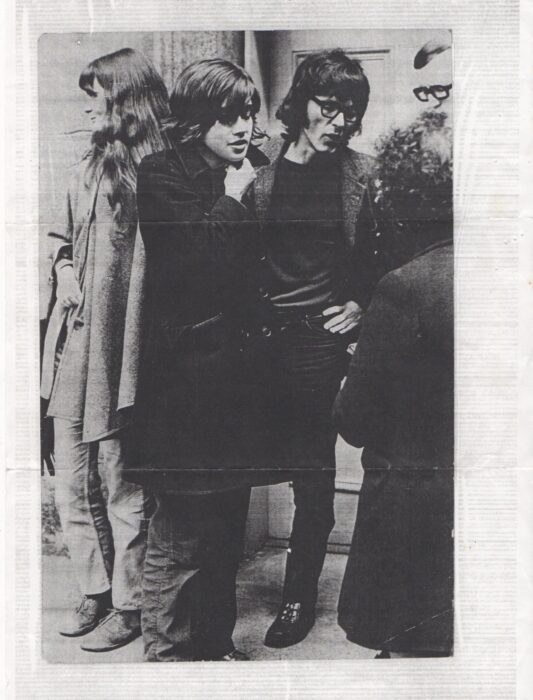 Students spent years in the 1960s and 1970s fighting for a “worthwhile” art college.

Art’s worth, the students realised, had to be justified. In recent months, many of us have been offered the chance to renegotiate our relationship with and appreciation for art. In 1971, NCA students experienced something similar – except instead of keeping them inside, it brought them out onto the streets.

In her published essay, “What is a degree in Art Worth?”, Fowler writes that “art is an oppositional practice, or, a form of critique against the establishment whether socially, politically, or artistically”. NCA students of the late 1960s seized on this logic and brought it to bear on their demands for the future of the college.

In 1969, after a series of reports asking for reform, a crisis situation developed and the college was closed periodically by the government. Gale remembers that for a time, “students were thrown out of the building,” and “moved to temporary accommodation in what is now Temple Bar”.

That academic year, the school opened five weeks late and the NCA students accepted an offer made by Trinity’s Art Society to use its facilities. Many students, including Gale, reported that the minister for education, on foot of student interrogations, was forced “to leave a meeting at TCD through a toilet window after repeatedly refusing to state why he had closed the NCA”.

Between 1969 and 1971, chaos replaced order and college days were filled with sit-ins, lockouts and demonstrations

Fowler insists that student protestors such as these – or “the disruptives”, as she calls them – have changed the meaning and heightened the importance of art by bringing these tales into the public sphere. “Non-interference by government should be a good thing when ministers are gloriously ignorant about art and think it is a hobby”, Fowler explains, suggesting that protests of the early 1970s continue to pay out dividends nearly 50 years later.

Students protested over a litany of issues – from reports stating that the college was not ideal for art training that went unacknowledged, to backlash against the dismissal of art model Jane Jermyn.

Over the phone, Jermyn, who is now a ceramicist, recalls the drama of the early 1970s. During a class in which she was modelling, “two teachers started attacking a student and told him that because he was married with a young child, he shouldn’t be a student”. Jermyn made a comment in defence of the student. “A week later, I had a letter dismissing me”, she says. “They said that I wasn’t attending enough, which was a lie.”

According to reports at the time, positions were flippantly accorded and dismissed without sufficient consultation with staff or student. Part-time teachers were employed on hourly rates and could be sacked within a week’s notice. Brian Lenihan, then the country’s minister for education, said that half of the teacher posts remained unfilled in 1971. Teachers claimed that the figure was higher.

But teachers, fearing the loss of their jobs, were sometimes slow to involve themselves in reform, and a good deal of dilettantism lingered. General meetings were rarely held and when they were, it was to discuss trivia such as the annual Art Ball where academic mandarins and students democratically ate, drank and mingled with stiff upper lips. 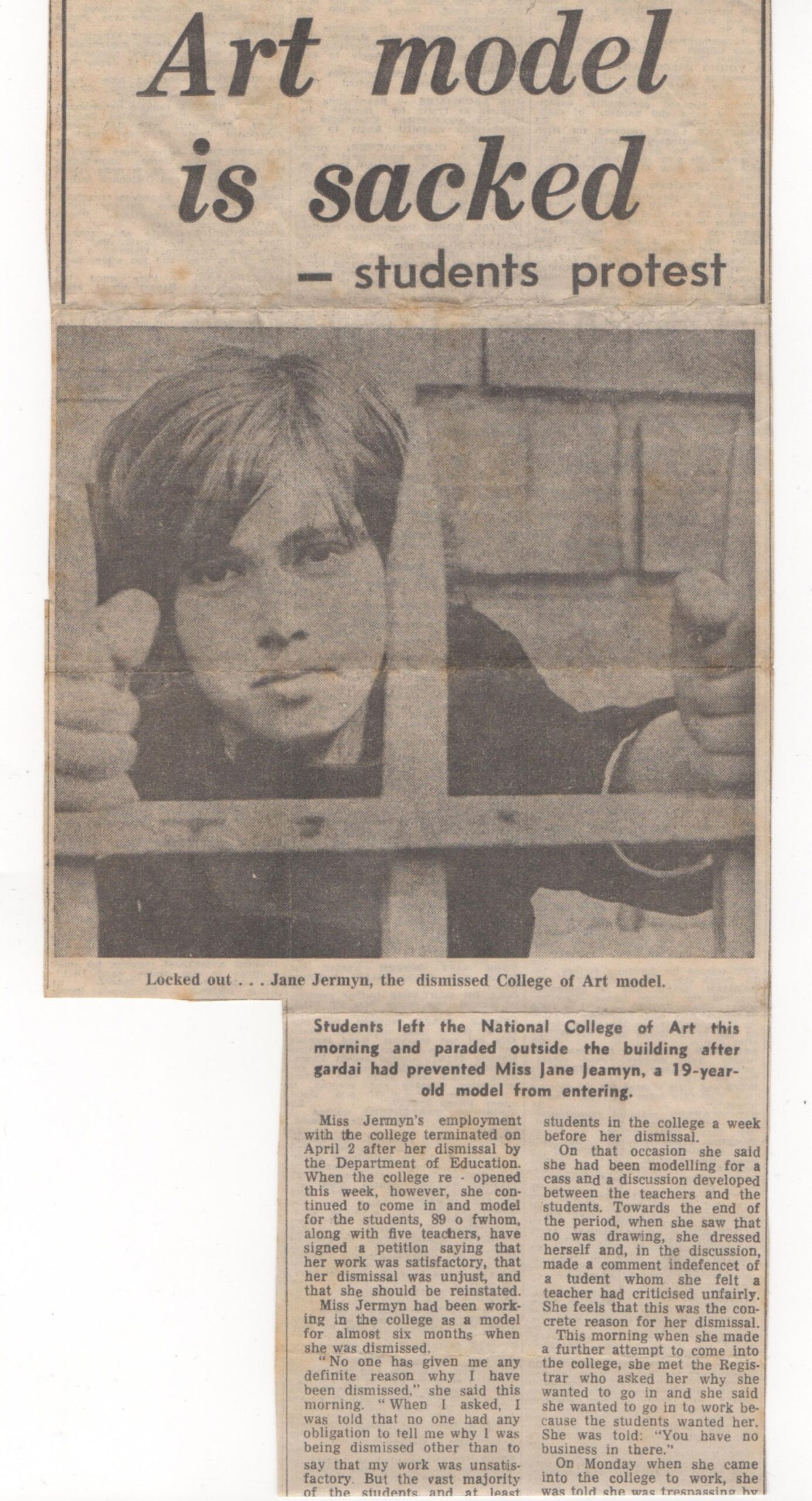 One of the issues that exercised students was the dismissal of the art model Jane Jermyn.

The students wished to bring an end to hostile staff-student relations, which usually manifested in accusations of “communist plots” whenever people opened their mouths. In 1968, there was to be the establishment of the new College of Art and Design. This never happened.

Students made several requests that the unoccupied office of a director who had recently been forced to resign be used to house a library. These requests were refused, but the students appropriated the office anyway, as well as two other unused rooms, and made library facilities available for the first time in the college’s history.

In April 1970, the first of many occupations at NCA took place. By the following year, NCA students were picketing the Department of Education on a daily basis. Students demanded that new legislation be introduced to completely dismantle the education system in order to sufficiently deracinate the problem. Their protests had now officially gone beyond art – they were taking on an institution.

Between 1969 and 1971, chaos replaced order and college days were filled with sit-ins, lockouts and demonstrations. Fowler, an art student in Belfast at the time, remembers the protests in Dublin: “Compared to the UK, the structures at NCA were archaic and it is hardly surprising that students resorted to protest.”

“There was probably a myriad of contributing factors, including generational differences, which are much less prevalent today”, she tells me.

Compared to the UK, the structures at NCA were archaic and it is hardly surprising that students resorted to protest

But students saw the problem not only as that of division between the ages, but also one between the urban and the rural, the elite and the working class. Fowler describes her own experience of art education as one that “developed confidence in self and a working vocabulary of sorts that facilitated the entry to the workplace which could by-pass manual levels”. The students wanted to NCA more accessible and, crucially, more relevant.

“It wasn’t in any way vocationally oriented”, she admits, but in so being it “probably did much for working class and rurally based kids who did not qualify for academic work”. NCA students wanted to see the same attitude govern the accessibility of the art college in Dublin.

Persistent student revolution did, eventually, pay off. In 1971 the National College of Art and Design Act was passed and re-established the college by granting it freedom to run its own academic affairs.

NCA would be managed by a board appointed by the minister for education (this limited power that the state still possessed drew the ire of a number of protesters). The college was further restructured in 1975 and a wide range of degree courses were developed, not to mention a Faculty of Design – the college was, at last, fulfilling its title as the National College of Art and Design. NCAD began to take a leading role in the promotion of conceptual and contemporary visual arts in Ireland.

We can be thankful for the students and staff of 1971 who reframed an institution that has contributed to the revitalisation of the Irish arts scene over the years. Irish art is a fledgling field of enquiry – its youth have created both challenges and opportunities for its practitioners. And the fighting spirit of NCAD’s students endures: in 2006, students successfully protested against the relocation of NCAD to the UCD Belfield campus and in 2015, the students protested funding issues – a problem that remains unresolved.

If these strange times haven’t done enough to illuminate art’s profound utility in our lives, then the story of NCAD’s recalcitrant students serves as a strong reminder to always support the arts. As Martin Gale recalls, the experience of protest “was a liberation and extremely significant – not only for the students of my generation”.