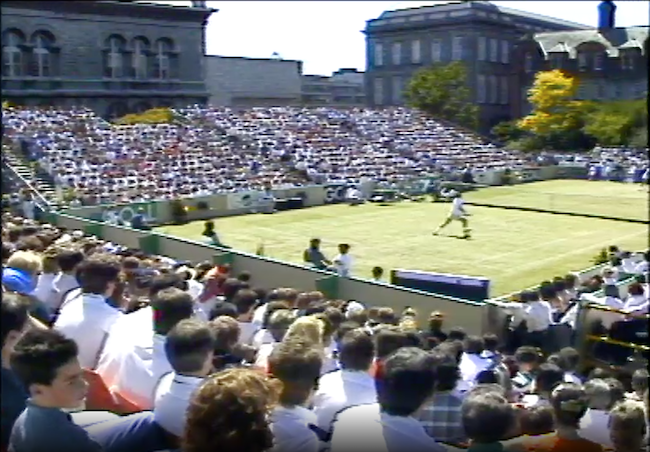 Yet this is precisely what happened on June 13th, 1988, when Trinity hosted an enthralling encounter between two men who were considered greats of the game back then, and are still held in lofty esteem now: John McEnroe and Mats Wilander.

The match was part of the GOAL Tennis Challenge, a charity tournament held in aid of the Famine and Relief Programme in Ethiopia and Sudan. This was the third edition of the event – it was also held in 1986 and 1987 – and succeeded in raising £60,000. All matches were played in New Square over the course of two days, with scaffolding seating erected around the square for the event.

Tickets for the event ranged from £10 for a standard seat, to £500 for a box – though for those students fortunate enough to be accommodated in the buildings adjacent to the Square, the spectacle was a less expensive affair.

The prominent attraction of the 1988 event was McEnroe, the 29-year-old “enfant terrible” of tennis. A three-time Wimbledon champion, the temperamental New Yorker was clearly no stranger to grass. This, combined with his Irish heritage, prompted demand for tickets to be deemed handsome enough so as to warrant a rescheduling of the tournament in order to align with his own timetable. 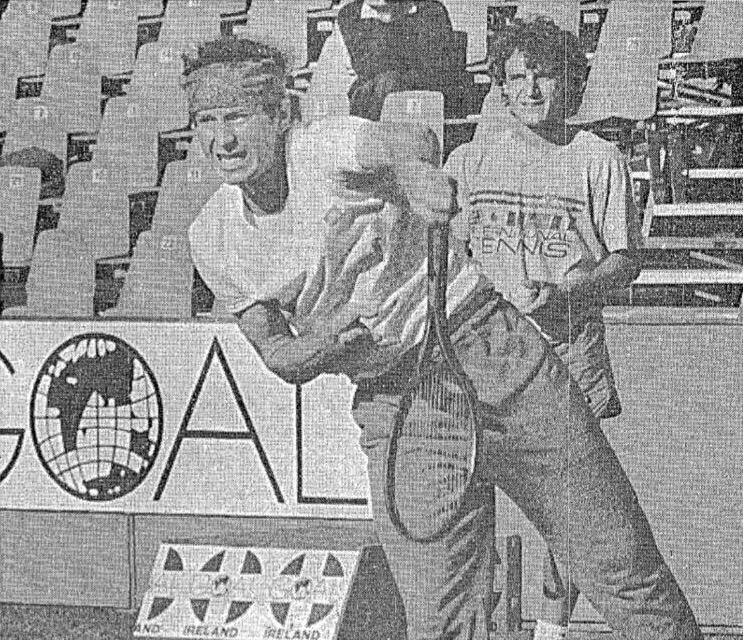 Wilander and McEnroe brought huge crowds to New Square, with tickets as expensive in some cases as £500.

McEnroe’s opponent was Mats Wilander. The Swede, 24, had already won the Australian and French Opens in the six months prior to touching down in Ireland, and was eyeing victory at Wimbledon in July to become the first man to win titles on grass, hard and clay courts in a calendar year.

Moreover, Wilander’s decision to sell his Porsche for £35,000 the week before the tournament in aid of GOAL made his popularity considerable.

McEnroe and Wilander’s shared 13 Grand Slam singles titles promised a fixture of quality – the excitement that ultimately accompanied this quality was a bonus.

On a day that RTÉ presenter Una O’Hagan noted for its fusion of “champagne and sunshine”, McEnroe edged the first set 6-4. His Irish heritage undoubtedly gave him an advantage over his rival in the decibel department, with the crowd rapturous after each triumphant point.

His sense of humour also appeared to enhance any favour he held with the Irish audience. When umpire Matt Doyle failed to spot a fault in a McEnroe second service that was blatantly out, the American joked: “It was six inches out – I’d prefer to get those sort of calls on important points.” 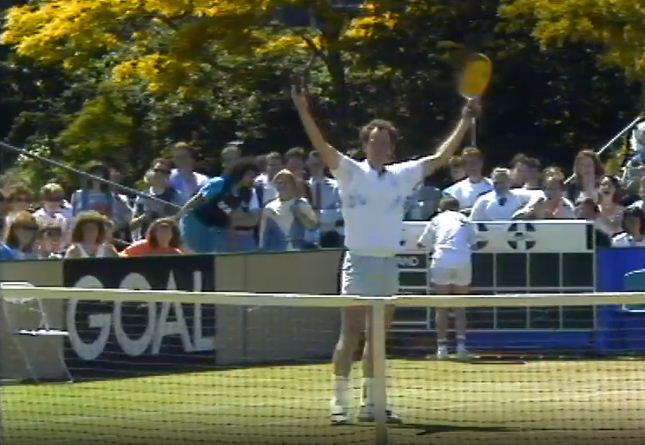 Wilander took the second set, but McEnroe prevailed after claiming the last set 6-4.

Photo from RTÉ footage of the match

However, it was a jibe at the expense of the English that perhaps unsurprisingly ultimately secured his place in the crowd’s hearts. Having miscued when kicking a rogue ball into the crowd after losing a point, he quipped: “I might get into the England team with kicking like that.”

Spurred on by his newly enamoured audience, he overcame the disappointment of Wilander clinching the second set 3-6 to overcome the then-world number two seed 6-4 in the final set.

His performance and antics appeared to have also left commentators equally charmed. Philip Quinn in the Irish Times was unequivocal in his analysis of McEnroe’s victory: “[McEnroe] gave a riveting display of touch, technique and controlled temperament to leave Wilander in a supporting role.”

By way of extinguishing any ambiguity that may have lingered after that fairly endearing assessment, Quinn later stated that “quite simply, he was superb. He left spectators breathless at times”.

Wilander got his revenge later that afternoon though: a 6-3, 6-3 victory in the doubles competition with partner and compatriot Joakim Nystrom over Peter Fleming and McEnroe kept things interesting. However, the latter got the last laugh, beating Nystrom in the singles final (6-3, 7-6) the next day – a match in which he served up one of his trademark tantrums for good measure, before auctioning off his racket for £1,600.

Wimbledon was an altogether less fruitful affair, with McEnroe’s run ending in the second round, and Wilander battling to the quarter-final of the one Major that would always elude him. There would, therefore, appear to be one underlying fact consistent with players and spectators alike at New Square that day: it was then that the summer’s tennis really did peak.