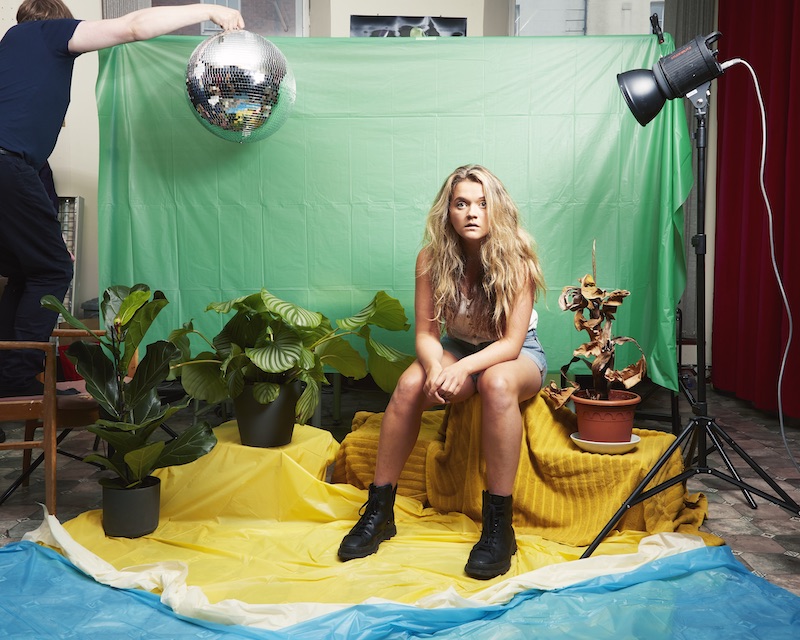 As far as theatre goes, Twenty Fifty has a lot going on: it has three characters – the director, who runs the game, the interviewer, who asks the questions and interacts with the audience, and the guest, who is played by a different person for each performance. The “interviewer”, played by Fionnuala Gygax, is living in 2050 and spends the performance telling us (the audience and guest) what the world will be like for all of us still stuck in 2020.

Occasionally, the director, played by Dan Colley, interrupts to inform the audience that the show has reached “2050”, and calls for a rapid-fire round of questions and answers, building towards a big reveal at the end of the show.
The show takes a broad look at a human experience of the world in 2050, but this often gets lost in the production’s environmentalist message and brief discussions on social justice, inequality, and what it means to be human.

Described in the programme as “a live improvised game between an actor and an invited guest”, it’s safe to say that this show is so much more. While Twenty Fifty’s exploration of Zoom’s capabilities is remarkably clever, it is trying to do a lot at once – and it’s slightly unnerving to have performers staring directly at the audience through a screen.

There were also some technical difficulties which brought the show to a brief stop in places. This threw off the pacing of the show as the person speaking froze and couldn’t be heard. However, the team’s handling of these issues allowed the show to continue and maintained the audience’s engagement.

The production must be commended for its success creating a feeling of intimacy on Zoom among its disparate audience of strangers. The Zoom gallery view was established as a theatre space from the off, with the same overhead announcements one would hear at a live venue before a show begins. The fact that the audience were all connected and sharing a pretty unique experience brought the people viewing the show closer together and made the end reveal even more emotional.

The structure of the show sometimes gets lost in the pitfalls of the interview format, such as awkward pauses where questions were misheard, or when the interviewer cut across the guest. The rapid-fire rounds interrupt the flow even more as they feel completely disconnected from the ongoing interview and pull the audience out of the show. The questions broach quite a few interesting topics such as gender identity, sanctuary, and social justice, but without affording them the thought and exploration that would do them justice.

While Twenty Fifty did suffer from a lack of pacing and a confused storyline, the big reveal at the end, where Gygax presents a compilation of the guest’s answers against an image of their favourite place with their favourite song playing in the background, is certainly emotional.

Gygax’s closing words introduce yet another important theme – that of the need for live theatre. As Gygax speaks about what 2050 will be like for the guest, she finishes with a rousing plea to the audience to continue supporting theatre so that no matter what the world is like in 2050, live theatrical performance can survive.

Overall, Twenty Fifty has a brilliant concept and cleverly manipulates technology to create a theatre environment, but its execution falls flat and results in a confusion of storyline and themes.

Because of the format and the choose-your-own-adventure style, it felt more like a game show than a piece of theatre. That said, the climactic reveal at the end evoked great emotion and the plea for the arts was something every audience member took to heart.

Twenty Fifty runs online as part of Dublin Fringe Festival until this afternoon, with the final performance taking place at 2.30pm.