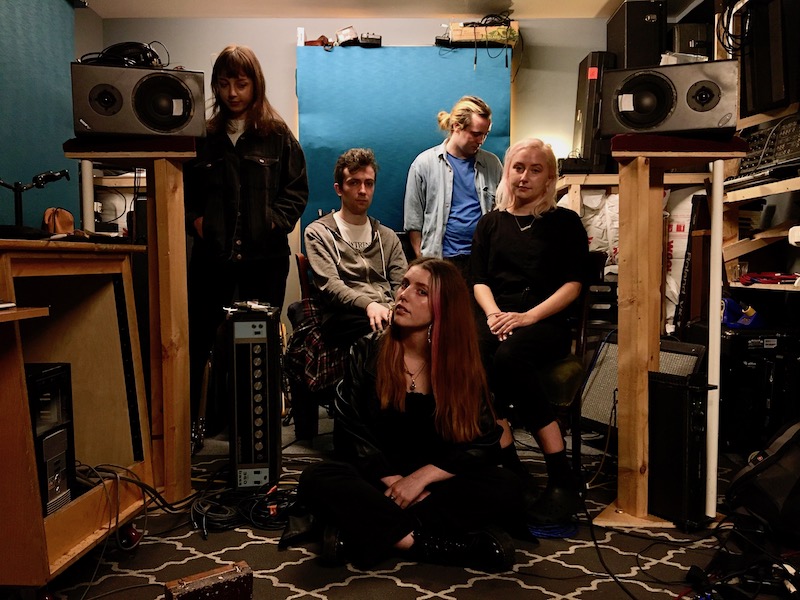 Considering M(h)aol’s ethos of abrasion, intensity, and reckless abandon, a linear timeline of the post-punk project is a lot to ask for. Starting off with the shaved haircut that inspired their name, the band has since transcended city, county and international boundary lines. Now, the global pandemic has reinforced the project’s Irishness and intersectionality at a crucial moment in time.

Although uneven, the band’s initial chronology is nothing to be sneered at, considering they broke into the core of Irish post-punk with Girl Band on their side before their first release. Bumping into Girl Band’s Dara Kiely at a party in Brighton in 2015, began what lead singer Roisín Nic Ghearailt calls their “nice little symbiotic relationship”, which led to collaboration on M(h)aol’s first single, “Clementine”.

It feels inappropriate to define M(h)aol by their association with male artists, given that their work sonically re-examines our country’s history of misogyny – a perspective absent from the fetishised revisionism in Irish rock. “I think that it’s important when it comes to writing about Ireland and Irishness [that] it’s not from the perspective of a white straight man”, band member Constance Keane elaborates.

“I’ve played music since I was nine or 10, and I’m still trying to shed the weight of the fact that, because I’m a woman I have to prove myself in terms of musicianship.”

“‘Laundries’ came out fully-formed, out of Mount Vesuvius over five years ago”, Nic Ghearailt cackles, referencing the latest song she has written for the band. Reminiscing on the post-marriage equality Ireland in which the song was originally written, she remarks: “I do just genuinely think that if I just look back in time, 2015 was the last not absolutely insane year.” In 2020, the song that was initially written about the atrocities of the Magdalene Laundries draws striking parallels with Direct Provision in Ireland. “The two are connected. It’s that idea of putting what is deemed to be societal ‘problems’, or bodies that ‘complicate’ society out of sight and out of mind rather than dealing with the issue”, she explains.

In the studio, Keane has the same insecurities as many women in the industry. “I’ve played music since I was nine or 10, and I’m still trying to shed the weight of the fact that, because I’m a woman I have to prove myself in terms of musicianship.” Outside of M(h)aol, Keane makes electronic music under the moniker of Fears. Comparing the treatment she receives in the industry in each capacity, she remarks: “There’s still such a way to go with the whole gender breakdown, especially in louder music. For me, coming from the Fears side of things, I think that Ireland is in such an amazing place at the moment when it comes to appreciating music made by women.” Comparably, she has experienced a lot of alienation as a woman in British noise rock. “There’s still such a confusion when you talk about how you’re in a noise band and you’re a woman because what’s trendy over there is definitely not women in these bands.”

At its core, M(h)aol was created out of frustration for the increasingly male-dominated post-punk scene reborn in Dublin. Five years later, it has become an international phenomenon. “It’s getting to a stage where, after having a break from the Irish music scene when it comes to these types of genres, I give so much less of a shit if they get what we’re doing or not”, Keane explains.

While their music focuses on Irish women in history and the issues they faced, M(h)aol’s verses show that these problems have never really changed but have been repackaged for the modern era. By recalling the tired statement of how those who forget history are bound to repeat it, their caterwauls echo and uplift victims who the system has failed.

In mid-August, Keane announced the formation of a label by and for women and non-binary musicians. With a view to forming a collective, with the potential for mentorship opportunities, a final announcement is expected in late October. “It’s actually coming together and I’m really confused by that”, Keane admits. “Because I’m starting one of the least viable businesses you can have – in a pandemic!” Not only are M(h)aol sonically dismantling misogyny, but they are starting from the inside out.

‘Laundries’ is available to stream on all major platforms now.