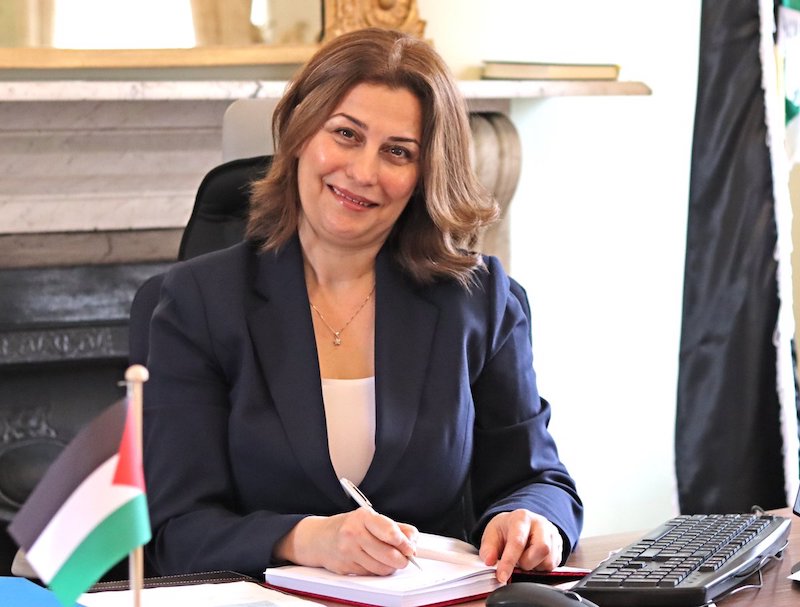 Abdalmajid was scheduled to speak last year, but the event was cancelled due to the onset of coronavirus restrictions. Chairperson of SOFIA Charlotte Van Spall said that she was thrilled to reinstate the talk this year, explaining that one of the society’s core functions is “to provide an open platform to raise awareness on key issues such as the Palestinian cause” and, more importantly, to “provide members with the opportunity to ask questions to diplomats such as Dr Abdalmajid”.

Abdalmajid has held the role of Palestinian Ambassador to Ireland since January 2020. Abdalmajid has been a key figure in the push to get the Occupied Territories Bill signed into law, which would criminalise Irish imports from settlement territories such as those that Israel has set up in Palestine.

In her talk, Adbalmajid focused primarily on Palestine’s current relationship with its occupying power, Israel, the history of the annexation of Palestine and the effect of Isreali settlements. She said she wished “to share reflections of the Palestinian struggle against injustice”.

In her talk, Adbalmajid touched on the international pressure being placed on Israeli annexation plans, political prisoner Maher Al-Akhras’ hunger strike and how Israel is utilising the coronavirus pandemic to oppress Palestian people with evictions amidst lockdown restrictions. However, she was careful to keep her talk brief, leaving ample time to field questions from the audience.

Van Spall began by asking how the forthcoming American presidential election will impact the Palestine-Israel relationship and the future of the Middle East. In response, Abdalmajid condemned President Trump’s peace plan, arguing that “it is not at all related to any peace. It is something related to the benefit of Israel. It has ignored the human rights of the Palestinian [people]. It has ignored international law. It has ignored everything”. When asked about American intervention again later, she stated that many democrats have brought the issue forward to raise awareness.

Abdmajid was also asked about her work on the Occupied Territories Bill and the challenge of condemning what Israel is doing, without being labeled anti-semetic. This last question is a very delicate one and Abdalmajid answered it accordingly, emphasising that “when we say something we have to be backed [by] realities, we have to use and choose our words and we have to educate ourselves”.

In response to the many questions of how people in Ireland can help those in Palestine, Abdalmajid urged people all over the world to continue to “raise their voices”, “talk to their representatives” and elect leaders to put international pressure on the Isreali government. She encouraged people not to become numb as “the world witnesses continuous human rights abuses”, promoting a turn away from indifference in the face of international injustices.