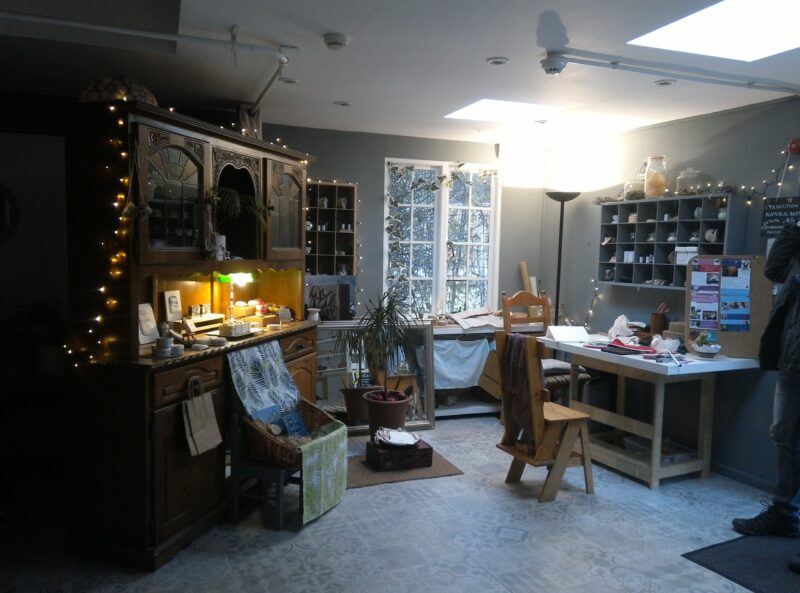 The set up of Barbora Nielybrab’s shop.

There are no free lunches, as they say. We live to work, grind to earn our keep and spend accordingly. At least, that’s the narrative swirling around in the wind. But how could it be any other way?

There are, however, other stories being told – ones that go against the dominant narrative of scarcity and individualism. Stories about trust, community and giving from the heart. Take a moment to peel back the gaudily shimmering veil of late-stage capitalism, peer behind its illusions and machinations, and you might spot something fresh. New paradigms await, other ways of being that exist alongside the mainstream just waiting to be tapped into. One such alternative? The gift economy.

An economic system where people exchange gifts instead of using the intermediary of money may sound like the stuff of fairy tales, but a quick look around your day-to-day reality will produce countless examples of this in action. Take a tight-knit neighbourhood community: sharing cups of sugar next door, someone else fixing another’s bike, and perhaps another raking the leaves at the end of the communal walkway. Nobody expects anything immediate or even directly proportional in return, yet there is an innate understanding that what goes around will come around. This is more than bartering – the neighbours truly have your back.

The freecycle movement is one such community that believes in this principle of giving. In Ireland it takes the form of a Facebook group (Zero Waste Freecycle Ireland) with over 13,500 members, where people post things they would like to give away for free. Anyone can comment underneath an item in order to claim it. Similarly people are free to announce that they are “in search of” something. You could deck out an entire student house with necessary bits and pieces: plates, cutlery, beds, books and posters are given away every day. My own house’s student-grunge decor has benefited greatly from freecycling. At this point we are living in an emporium of the weird and wonderful as one of my housemates has become particularly attached to the thrill of finding random free oddities online.

I began to wonder whether these moneyless exchanges of goodwill might have any wider ripple effects on an otherwise money-obsessed society. This lively hub of givers and receivers has brought plenty of positivity to my own life: my trusty iron is from Freecycle, and recently I picked up a bag of compost for my plants from someone who had spare. He was delighted that he could clear out his compost bin.

With all of this in mind, I reached out to freecycle’s founder in Ireland Barbora Nielybrab, who spoke passionately about the concept of community: “Openly giving and receiving like this is the basis of a healthy community, in my opinion. With a global economic crisis upon us, the effects of which we will all start experiencing pretty soon, people will have no other choice but to be reaching out to each other to share resources. I think a group like ours is where the normalizing is happening and where the conversation begins.”

This is more than bartering – the neighbours truly have your back

The normalising of such actions of generosity and interdependency, according to Nielybrab, “gives communities a chance to grow stronger. And it is used not only to exchange items but to borrow, get help or advice, share skills and services. All free of charge”.

Everybody benefits from a stronger community, and the environment benefits too, as overall consumption is reduced.

Nielybrab tells me the perfect story to illustrate the green effect of sharing in this way: “Around the same time that I started the Freecycle Ireland page I opened a small retail outlet in our town offering zero-waste bodycare products and accessories, and my group was the first port of call for units, lights and display items. The result was that all the furniture in the shop was entirely donated by members of the group. Last year, when the situation around COVID hit, we made the decision to leave the shop, and most of the pieces that had been donated three years before found new owners via Zero Waste Freecycle. We returned them ‘back to the cycle’ – one of the popular phrases in our group.”

This concept of circularity is key to understanding gift economies. In action, they are complex, interrelational cycles: giving and receiving, never hoarding. Goods are always in the flow of gratitude and reciprocity. Operating in this way requires trust: you are no longer a rational economic actor, slave to linear thinking (“I need X money to purchase Y so I must work Z amount”). Instead you surrender to a synchronistic mode of being, heavily subject to the living stream of life’s offerings.

For the few people who have fully opted into living in a gift economy, such as the original thinker behind freecycling, environmentalist Mark Boyle (author of The Moneyless Man), life becomes a bit of an adventure. Adventures aren’t always comfortable, but they certainly make you feel alive. Boyle now lives off the grid somewhere in Galway, and unfortunately did not respond to my letter with questions for this article.

My endeavour to find someone living fully immersed “in the spirit of the gift” actually proved difficult. People living such anti-mainstream existences are generally less readily available by means of a simple Google search. I had to ramp the search up a notch.

One of the most famous thinkers on the topic of gift economies today is Charles Eisenstein, author of the popular book Sacred Economics. As a writer on the interplay between topics such as ecology, human civilisation, spirituality and economics, Eisenstein has a lot to say on what money and its exchange means for humans today.

While Eisenstein himself as an in-demand public speaker and intellectual would have been near impossible to pin down, I did manage to speak with a member of his team about the life he lives and teaches. Sarah Forgacs tells me: “Charles lives his whole life in the spirit of the gift. He teaches that we have lost all sense of community. The things that we do for each other have all been reduced to money. Community has been monetized. It’s no longer about what we can do for each other. It’s more about if I do something for you, I’m thinking about what you are going to do for me in return.”

So what does a lifestyle of rejecting such individualism look like? “When you’re giving, you’re not thinking, ‘well this cost me X pounds so I hope I get that back someday’. It’s more of a state of being. You give a gift because you want to do something nice for someone, you want to radiate love and generosity into the world. Charles doesn’t charge for his speaking. He says pay for his travel to get there and that’s it. For his courses it’s ‘pay what you think it’s worth or what you can afford’”.

Forgacs herself is operating in the spirit of the gift by working for Eisenstein: “I’m a full-time Montessori teacher. I answer Charles’ messages to his website in the evenings. I’m not paid for it. I just know that this amazing man’s books changed my life and I want to do something for him as a result.”

Here again is the circularity. Eisenstein teaches that the giving always has some sort of reiterative effect upon the giver, although not always an obvious one. Forgacs says: “If we think of things coming in cycles, in life cycles, we talk about a gift circle – a gift economy is just that. It’s very circular in that, by giving, it will come back to you full circle. It might take a while, it might not be immediate, but maybe 10 or 20 years down the line it will come back to you in some sort of form. Like your gift re-incarnated.”

Connecting to this pulse is a surefire way to get nice and familiar with the universal forces architecturing our daily lives. Stepping beyond money, which is arguably merely a symbolic representation of what we supposedly contribute to society, removes a distance of sorts. To what are we brought closer? The laws of our reality, it seems.

When you’re giving, you’re not thinking, ‘well this cost me X pounds so I hope I get that back someday’. It’s more of a state of being

Newton was onto this long ago with his law: “For every action, there is an equal and opposite reaction.” We can take this to mean that an act of giving doesn’t “poof” into nothingness. The world won’t just take your generosity and run. Something’s going to come of it. The universe itself as a single body – unus versus – will have something bouncing back your way as soon as you give something out.

Obviously some searing questions arise here, namely, how on earth could this work in the real world? We have, of course, grown up in a market economy with a currency based on a principle of scarcity. Experience has taught us that the world is a mean place. But is it the world that is mean, or just our way of engaging within it?

Nature, too, can be mean. Yet despite her harsher elements, nature is also abundant, bounteous, and ever-renewing: words laughably alien to how our experience of the world usually feels. Why doesn’t our economy reflect nature’s principles, the smartest system there is? A forest is a gift economy. An ant will eat insects off a tree which enables it to provide shelter for birds, who will probably later fly off and spread some seeds for the tree. None of these organisms are looking for credit when they help out in this way, they don’t even think about it. They just give up their energy to the whole, driven by something primal that knows their survival depends upon it.

All of this goes against what we seem to know to be true about life. But is the world and its offerings really as barren as our current market economy paradigm would have us believe? Or is there more behind the veil?

Our current economic existence is entrenched in scarcity and imbalance. We are in a pyramid, where the system is skewed in favour of those at the top. In this system wealth floats upwards and accumulates there, such that the world’s richest one per cent have more than twice as much wealth as 6.9 billion people in the bottom tiers. The events surrounding the coronavirus pandemic has seen the wealth gap increase even further. How can this be natural?

Our economic system has normalised behaviour that arguably fits the dictionary definition of sociopathy. Our system teaches that hoarding is fine, and giving openly is crazy. It’s probably time we held up our understanding of the word “crazy” and examined it in the light of day. We might just unearth some new perspectives on the system we find ourselves in.

So, call me crazy (I’ll take it as a compliment), but I see gift economies as something worth taking seriously. Giving from the heart can be an act of rebellion, directly opposing the “me, me, me” values that neoliberal capitalism teaches us are the only way. How far could we take this? Maybe we could gift our way to a whole new way of being in this world?

Eisenstein teaches that in a gift economy, “the more you give, the richer you are.” That sounds good to me.