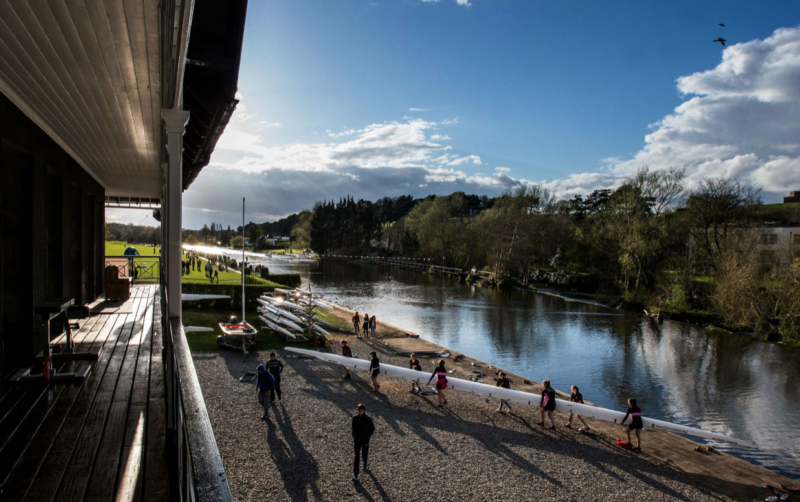 The Dublin University Boat Club (DUBC) is by far one of the most successful – and oldest – clubs in College, and with this success and old age comes a supportive and strong base of alumni.

Alumni funding allows the club to secure state of the art facilities and trips abroad. In 2019, DUBC travelled to Boston to compete in the Head of the Charles Regatta – the only Irish competitor to do so.

The vast majority of college boat clubs cannot afford to fly themselves and ship their boats over to America for a week, and this includes the Boat Club’s counterparts in the Dublin University Ladies Boat Club (DULBC).

Without the same alumni base, they, instead, rely primarily on fundraising – like bag packing in M&S – and money from College to run the club.

While this funding, and the money they get from the Dublin University Central Athletic Club (DUCAC) goes a long way, they currently cannot compete with the kind of money DUBC bring in.

Without the same alumni base, they, instead, rely primarily on fundraising – like bag packing in M&S – and money from College to run the club

“DUCAC and Trinity Trust are definitely our biggest source of revenue”, echoes DULBC captain Eimear Fahy. “Then fundraising, then alumni.”

It is here that the club’s finances diverge from those of their male counterparts.

The much thinner alumni funding available for DULBC is largely due to them being a younger club less steeped in tradition. Founded in 1976, DULBC are on unequal footing next to DUBC, whose 1836 inception has facilitated a far greater breadth and depth of alumni.

“With the boys, they have bigger alumni donations, because they’re more established… They’ve been there longer – we’ve only been established since 1976”, explains O’Neill.

“Intergroup relations are really good”, she adds. “I just know that the men – they get a lot more money – like money isn’t really an issue with them.”

DULBC do not currently receive a consistent inflow of alumni funding. They do, however, get intermittent donations from alumni and from fundraiser events like the Alumni Dinner. The club received €900 in alumni funding in 2019/20 and €560 in 2018/19. This year their only source of alumni funding comes from a single alumna who donates monthly to the club.

This discrepancy is certainly not a disastrous impediment. With their respective budgets, both clubs are able to compete at all domestic regattas and Heads of the River, and crucially at the Irish Rowing Championships too.

Where the gulf in the funding is really exposed, however, is when it comes to competing internationally.

“Last year, we had saved up the money [for Henley] and we were planning to go and we had a lot of fundraising and stuff. Then COVID came”, says O’Neill.

If the crew were to make it to Henley – one of the most prestigious rowing events in the world – they would have certainly earned it.

“We do big sales. We did bag packing in M&S [Marks and Spencers] like twice a year. We really got out there and did stuff and last year I think we raised maybe close to a grand, something around that.”

With the boys, they have bigger alumni donations, because they’re more established… They’ve been there longer – we’ve only been established since 1976

“At Christmas, we do carol singing, but we give that money to charity”, O’Neill adds, not without diffidence.

While both clubs engage in fundraising, the presence of their male counterparts at Henley is something of an annual fixture – unlike the more ephemeral, funding-dependent appearances made by DULBC.

The strong base of alumni not only help guarantee DUBC a berth at Henley, but also means that this berth is not contingent on the men packaging the purchases of Marks and Spencers’s customers.

This alumnical altruism has also helped to enable the men to race annually at the Head of the Charles Regatta in Boston, Massachusetts. Unfortunately for DULBC, fundraising will not be enough to propel them to American soil.

“I’d say we all would love to go and race in Boston – that would be a fantastic opportunity. But then I think we just realised that we don’t have the funds to go you know… so we just have to kind of get over it and work towards our goals”, says O’Neill.

“It’s not going to be cheap to get us eight girls and boats to Boston”, she adds.

Of course, not being able to go to Boston would rightly be labelled one of the more clear-cut instances of a “first-world problem”.

DULBC, by nature, is particularly vulnerable to the challenges posed by a comparatively modest revenue from alumni, given its smaller pool of former rowers.

This, and the vast expenses associated with running a boat club – the boats can be €15,000 each and the costs of transporting them, especially internationally, are not cheap – put DULBC at a stark financial disadvantage relative to the men.

Indeed, it is worth noting both Fahy and O’Neill were especially keen to emphasise their gratitude for the contributions they already receive from alumni.

“We bought a new boat maybe two, three years ago and the alumni did chip in”, says a palpably appreciative O’Neill, “and at our last alumni dinner in 2020, Jane Williams came and she’s the founding member of DULBC”.

It is important to note that the lack of alumni income for DULBC is in no way a barrier to participation, nor does it restrict access to facilities or competition.

The club’s allure to freshers also remains undiminished by the limitations on opportunities for the girls to row internationally.

While both clubs engage in fundraising, the presence of their male counterparts at Henley is something of an annual fixture – unlike the more ephemeral, funding-dependent appearances made by DULBC

“It’s crazy. We had 50 novices coming this year… the demand is crazy”, says O’Neill.

Yet given the entrenched structural inequalities at play here – the more broader societal issue of a gendered wealth gap – it would seem little could be done to alleviate the disparity between the alumni funding of the two clubs quickly.

However, merging the men’s and ladies’s boats clubs is one potential solution and is something nearby rivals University College Dublin (UCD) have recently done.

While such a move has yet to be discussed here at Trinity, it is not as big a step as it sounds. The clubs share boats, equipment and even a strength and conditioning coach. Indeed, both clubs already compete together under the latter’s banner in the Irish University Championships.

DUBC did not provide a comment for this article, but did say that “anything that could increase funding for DULBC is a positive”. A merger of this sort, however, would likely mean spreading alumni funding across the two clubs – something heretofore unexplored.

The blossoming of women’s sport over the past half-century or so has only enriched the sporting scene. But securing equality has involved more than just “allowing” women to compete or play. It has also entailed actually enabling women to play – and perhaps the greatest enabler in sport is funding.

It is clear that there is a discrepancy between alumni funding in men’s and women’s sport, across the board – this phenomenon is in no way unique to boat clubs. Whether this will be changed over time – as women’s sport becomes increasingly prominent and engrained – is yet to be seen. However, opening up the issue to conversation may help bridge the gap.