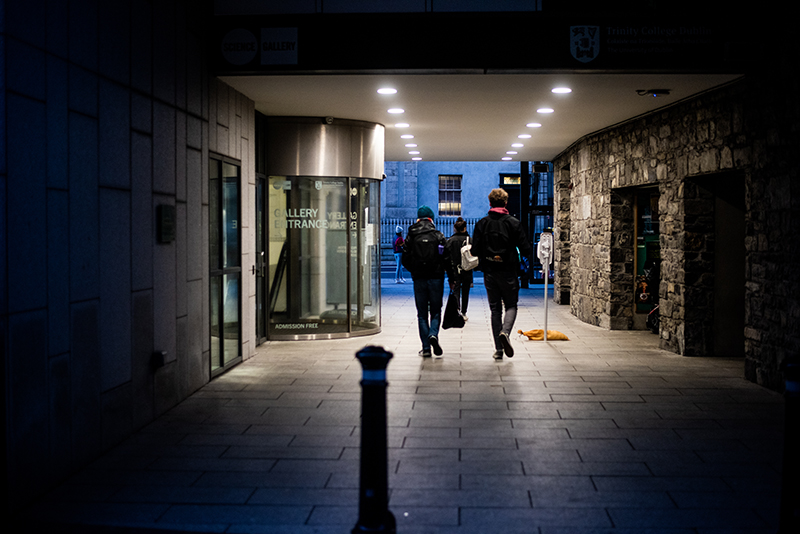 Coronavirus did more than produce a global pandemic, causing health complications for millions of people around the world. The virus also highlighted the spread of misinformation online, forcing health professionals to discuss the importance of delivering scientific information to the public.

Despite the roll out of vaccinations, Irish residents are not immune to this alternative threat. Freedom on social media platforms gives anyone who has access to the internet the ability to share information, whether it is true or false. Those that use social media everyday are bombarded with content from people along an entire spectrum: scientists, public health officials, entertainers, policy opponents, conspiracy theorists and even algorithmic bots.

This is more concerning for Ireland’s young adult population, losing out on social interactions and increasing their presence online. During a time when most health news is delivered through television and radio broadcasts, young adults are instead filling their connectivity void on social media, making it difficult for helpful information to reach them.

In March 2021, an email was circulated to postgraduates and medical professionals in Irish research institutes gauging interest to participate in a novel online initiative by the Department of Health. Four Trinity postgraduates were selected to be part of a nationwide content creation team, and invited to meet with the communication arm of the Department.

During a time when most health news is delivered through television and radio broadcasts, young adults are instead filling their connectivity void on social media

This began the online Science Communication Collective, a project hoping to deliver up-to-date scientific information to Irish young adults through platforms they already heavily use.

Jamie Sugrue, a PhD student at Trinity’s School of Biochemistry and Immunology, is one of the students involved. His project aims to unravel the innate resistance to viral infection in women accidentally exposed to Hepatitis-C contaminated medication in the 1970s.

Sugrue’s roots of communicating science are attributed to his previous work at The University Times as a Irish langugage translator and the newspaper’s first science and research correspondent. When asked about what science communication means, Sugrue states, “bringing science to the masses. I think in Ireland we are pretty good that we have a relatively strong scientific literacy, partially because we have great science communicators”.

In terms of the initiation of the Science Communication Collective, Sugrue explains, “over a year into this pandemic, the Irish government has recognized that the public health briefings that occur are not really consumed or not watched by people aged 18-30. They also recognize that that particular cohort do feel pretty neglected in terms of public health policy and have been severely affected by the pandemic”.

Indeed the Science Communication Collective provides an opportunity for public health officials to reach Irish young adults generally hit hard by the COVID-19 pandemic. Their awareness that this age group consumes news more so on platforms rather than broadcasts is a great step to empathize with this often neglected group when forming government policy.

In order to reach this age group, the communications arm of the Department of Health recruited a team of 12 science communicators from around Ireland to participate. Sugrue says that their goal is to, “fill the communication void by having young people who work in the areas related to the pandemic, have them communicate science on platforms that are used by people aged 18-30”.

over a year into this pandemic, the Irish government has recognized that the public health briefings that occur are not really consumed or not watched by people aged 18-30

Also involved in the Science Communication Collective is Laura Finnegan, a PhD student at the Smurfit Institute of Genetics. Her project assesses how novel gene-based therapies can be best utilized to treat retinal degenerations. Finnegan notes that her transition into communicating science through illustrations simply started because of the importance of scientific research in general.

Finnegan highlights the significance of science communication during a public health crisis like the coronavirus pandemic as she says, “it’s just so important that if you can do it, I think that you should, especially with COVID, that there’s people everyday risking their lives to fight the pandemic. So if I can draw a picture to show someone how to wear a mask properly, that’s the least I can do”.

Regarding the capacity to which the Government of Ireland is involved, Finnegan states, “every two weeks we have a meeting with a representative from NPHET or the Department of Health, like we’ve met Dr. Cillian DeGascun and Dr. Ronan Glynn, and we can ask them questions so that if we have any questions that we’re not 100 per cent sure about, then they can clarify them”.

To determine what young adults even desire to know regarding news of the coronavirus, Finnegan mentions that the Department of Health, “runs focus groups with young people, sits down with people from those age groups of all different demographics and chats with them on what they’re concerned about”.

For many of those involved in the project, science communication is an important part of their life. Yemi Rahman, a PhD student at the School of Chemistry and the co-founder of the Conference for STEM researchers of Black/African Descent in Ireland, details the significance of discussion, education and raising awareness when it comes to the field of science. His project concerns screening drug compounds against parasites causing diseases ravaging developing countries.

Rahman describes the process of content generation by science communicators, “after meetings with NPHET board members, there’s a weekly message we want to tell the audience, and this is based on scientific research that is going on at the moment”.

When asked about what influenced his journey into engaging the public with science, Rahman’s major contributing factors are, “making my mark in the field, and that there is so much exciting research out there”.

After meetings with NPHET board members, there’s a weekly message we want to tell the audience, and this is based on scientific research that is going on at the moment

Since competing against misinformation and other popular content on social media platforms can be a difficult task, Rahman says, “generally I have a message in my head, and I tune into what the latest trends are on these platforms, and kind of mix the two… A lot of things run on algorithms, so the best way to get the message out there is to mix it in with a trend”.

The Department of Health has also partnered with Pluto, a Dublin-based marketing company, in charge of managing the social media accounts and providing feedback to creators about their generated content.

By recruiting professionals from Trinity and around Ireland already dabbling in creative methods to communicate science, this can aid delivering truly helpful information in creative ways. Perhaps with more solidified, communicated outcomes, similar projects can be built upon this foundation and battle the rising global concern of spreading misinformation, an issue that will linger well after the pandemic is declared over.

Laura Whelan, a Trinity student pursuing a PhD in the field of ocular genomics and member of the Science Communication Collective, notes that using strengths specific to certain social media platforms will be the key to the collective’s success.

Since she herself is active on the major platforms for her own science communication projects, Whelan mentions, “Tik Tok is primarily a video-based platform. Now what you have on Tik Tok could also be on Instagram Reels… If you want something that looks more permanent, or provides more information through a carousel of posts or numerous posts, that would belong on Instagram”.

Whelan’s project focuses on NGS technologies and functional analysis to strengthen Target 5000, the Irish National Register for inherited retinal diseases. Her passion for science communication started early, influenced by her mother who provided opportunities to talk about science to students in primary school.

In regards to communicating her own scientific research, Whelan states, “I realized just how much public funding goes into science, and we would be doing the public a disservice if we don’t share what we do”.

A lot of things run on algorithms, so the best way to get the message out there is to mix it in with a trend

Overall, Whelan’s goals for the collective echoes that of her colleagues, “trust and understanding in science, becoming interested in science, and then in a more practical sense, uptake of a vaccine”.

Like many online media campaigns, a missing component about the Science Communication Collective’s mission are measurable outcomes on how the collective’s content influences young adults. How this will be tracked and analyzed will likely be interactions with posted content (ie. likes, shares, etc.), yet how this relates to whether young adults will adhere to the messages being conveyed seems difficult to ascertain.

Moreover, engagement with followers will also prove to be invaluable, especially with online media rife with unwarranted criticism. Indeed, all four science communicators stress that answering valid questions and listening to concerns of Irish young adults must be a priority among all participants of the collective: science communicators, marketing advisors and government personnel.

Correction: 4.57pm, June 21st, 2021
The subheading of a previous version of this article incorrectly stated that the Science Communication Collective is sponsored by the HSE. It is, in fact, sponsored by the Department of Health.