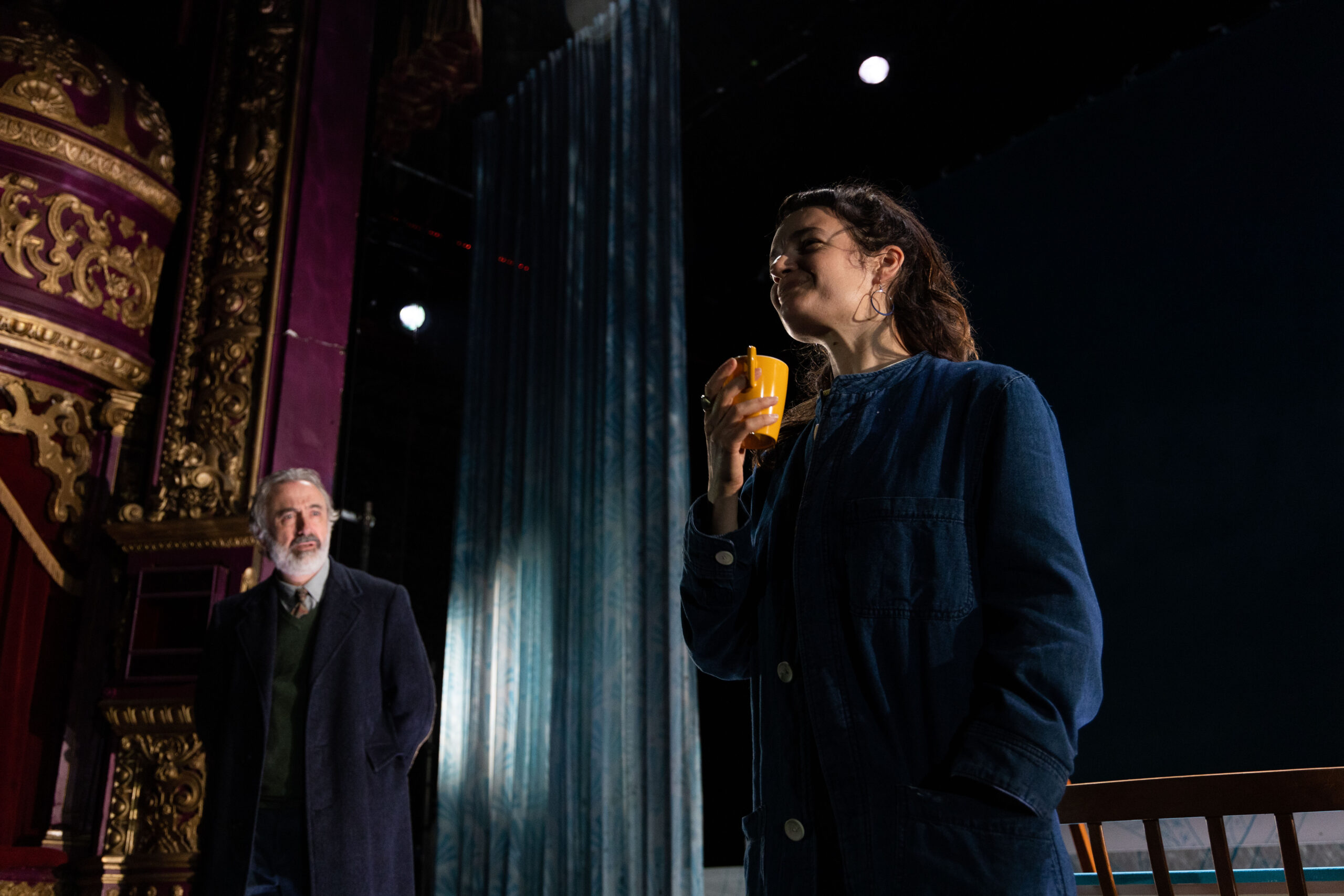 Marina Carr’s adaptation of Virginia Woolf’s To the Lighthouse was an inspired take on the novel, bringing it to life for audiences across the country as part of Cork Midsummer Festival. The show makes brilliant use of camera angles, direction, and monologues that intersect one another to tell the story of the Ramsay family.

The story follows the Ramsay family through their initial days of happiness in a home near a lighthouse, and then a decade later following the war. It deals with the pain of family relationships, the passage of time, and the legacy we leave behind us. The ensemble cast carries the play as they bounce off one another in a series of interconnected monologues that capture the essence of the modernist novel. Despite playing to an empty theatre, the energy never wavered and I truly felt each actor’s intensity as they took on their character.

As the play was filmed, the creators took advantage of camera angles and sound design to create atmosphere. Cam, one of the youngest Ramsay children, remains unseen for most of the play – she is given life through a voiceover done by Danielle O’Neill and a musical motif. In one brilliant moment, the camera creates the illusion of a chase as she evades Mr Bankes and Prue Ramsay when asked if she would give Mr Bankes a flower. The combined effect of the voiceover and the musical motif gives Cam a sense of childish playfulness and independence.

Derbhle Crotty, playing Mrs Ramsay and doubling as Virginia Woolf, is centre stage for almost the entire show. Her acting is powerful and compelling, every word spoken with practiced ease. She opens the play front and centre, delivering her monologue as she watches Mr Ramsay (played by Declan Conlon) worry about his legacy. Her interpretation of the character highlights the repressed intelligence and ability of many women at the time, while also revealing how ingrained behaviours upholding systemic discrimination can be, with her desire to see all her children and female acquaintances married.

Equalling Crotty’s outstanding performance is Aoife Duffin as Lily Briscoe, the artist staying with the Ramsays. While present in the first half of the show, her ability truly shines in the second half as she reflects on the legacy we leave behind through her memories and depictions of Mrs. Ramsay. Duffin brings to life Lily’s curiosity about the world and the abstract, giving her reflections on the role of women even more prominence at a time when female artists were rarely respected.

Carr’s fantastic writing echoes Woolf’s take on the modernist novel by utilising her characters’ internal and external monologues to reveal the truth behind their facades. The writing also plays with time and location, especially in the second half of the show, as dead characters return to life to explain the events of the 10-year time skip. The directing by Anabelle Comyn emphasises this, making use of curtains behind the stage to demonstrate death and positioning sparring characters across the stage from one another, making their battles personal and intense.

One scene where the impact of this truly comes across is the dinner scene towards the end of the first half of the show. Each character is positioned across the table from their rival – Mr and Mrs Ramsay at the foot and head of the table, William Bankes and Augustus Carmichael positioned closest to Mrs. Ramsay symbolic of their warring views about her, and Charles Tansley and Lily Bruscoe positioned across from one another where their internal monologues spar over women’s rights and abilities. As the scene progresses, the monologues become more and more intense, resulting in conflicts coming to a head and leaving Mrs Ramsay alone at the dinner table in a powerful image about the importance of truth and trust.

Overall, the play is enchanting and powerful – everything from the writing to the smallest details in costume design brings Woolf’s characters to life and brilliantly transfers her modernist writing to the stage. The casting was spot on, with each actor taking on the personality and intensity of their character. The way the camera crew plays with angles and lighting adds atmosphere and a sense of vibrancy to an otherwise barren theatre, and I would hope to see the play performed live one day with the help of some of these techniques.