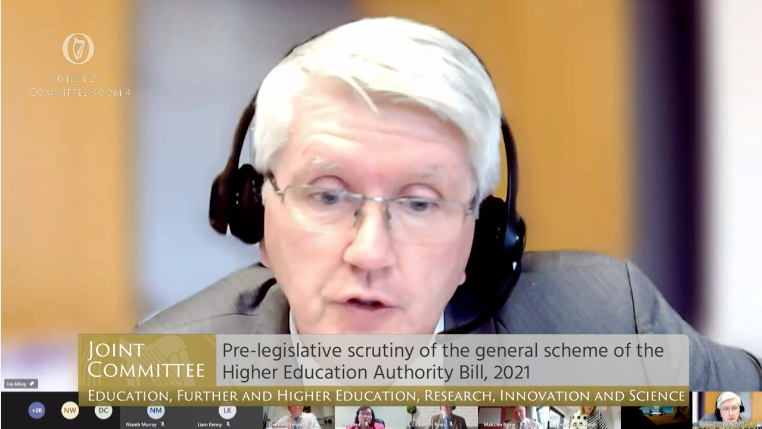 The autonomy and agility of third-level institutions should not be compromised by any changes to how the institutions are run, the Oireachtas Joint Committee on Education and Further and Higher Education has heard.

The bill would give the Minister for Higher Education the power to suspend and replace the governing body of state-funded universities, if there are very serious concerns about how the institution is operating.

In his opening statement, IUA Director General Jim Miley said that while there was a “need to update the half-century old legislation” currently in place, “it’s essential that the specific provisions of the Bill do not compromise institutional autonomy”.

The Higher Education Authority (HEA) would be renamed the Higher Education Commission under the proposed legislation, and would have a stronger regulatory and oversight role, including with regards to statutory codes of governance of universities and statutory performance frameworks for state-funded higher education institutions.

CEO of THEA Joseph Ryan told the committee: “The HEA has also a role in defending diversity: Moves that lead to the homogenising of the system, consciously or otherwise, should proactively be resisted.”

The bill presents, he said, a “risk in constructing governing bodies that are too small”.

“Given the increasing complexity and responsibility in these organisations, a cap of members results in practical housekeeping difficulties”, he said.

Fianna Fáil Senator Malcom Byrne questioned how universities should be sanctioned “if there is a problem with spending money”. Miley said that the IUA accepted that accountability “needs to be strong”, but that it means decision making should be made “as close to the frontline as possible – as in, with the governing authority and the relevant institution”.

Miley also said that universities must be able to remain agile under any changes to their governance. “All of our institutions in a hugely agile way to the pressures of COVID”, he said, referring to the rapid switch to online teaching and the converting of research labs into coronavirus testing facilities.

“We have to link that to the individual agility of institutions to be able to make those decisions”, he said.