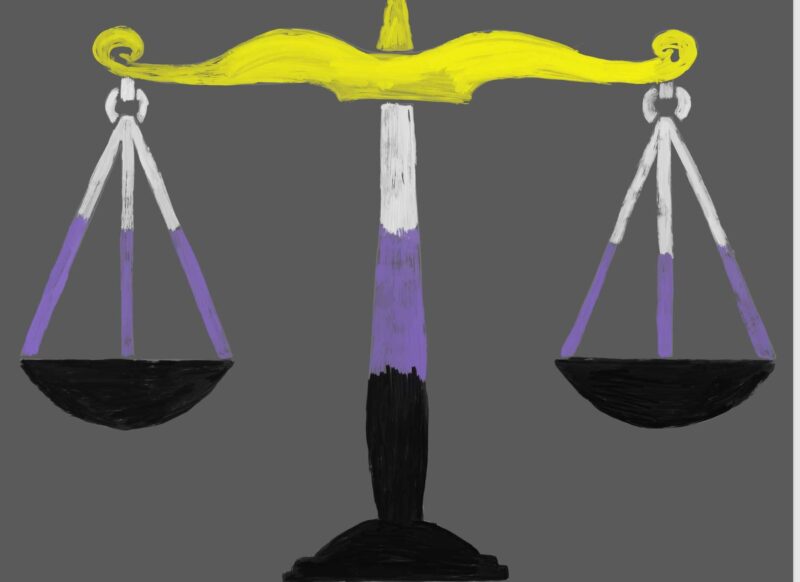 Conversations about gender recognition legislation were recently renewed after the UK Supreme Court heard a case which will determine whether passports can be labelled with an “X” gender marker for non-binary individuals. It was first brought forward by Christie Elan-Cane, a non-gendered person who has fought the case for almost 30 years.

The label “non binary” is an umbrella term for people who identify outside of strictly male or female gender identities, including those who identify as genderfluid, genderqueer and agender. Non-binary identities do not refer to a third gender, but a collection of positions in relation to the gender binary which each have their own unique complexities.

The case’s progress has also coincided with a rise in transphobia across the UK. Over the last few years reported hate crimes against trans people have increased by nearly 16 per cent. Students, in particular, have been hit hard by these recent trends. During the pandemic, many trans and gender non-conforming students had to live at home in environments where they could not explore gender identity and expression.

They had to adapt to online classes and resources which can be exclusionary or non discrete towards their identities. These issues have coincided with a number of other social factors which disproportionately affect these communities, such as housing insecurity and a lack of access to general healthcare.

Alex Scott, a non-binary student from the UK, describes how these developments have had a specific effect on their life: “For many of my gay and bisexual friends, university was a place for them to experiment and figure out their sexuality and be themselves, but I don’t feel as though I can have that same experience as a non-binary student.”

During the pandemic, many trans and gender non-conforming students had to live at home in environments where they could not explore gender identity and expression

“Many will be living in student halls knowing that their flatmates will misgender them on a daily basis, and the lack of legal recognition means that universities and student unions may be reluctant to help if they don’t see it as a priority.”

Scott feels their concerns directly relate to the way their identity is perceived by institutions. “On paper, my identity as non binary matters as little as my favourite band, and yet it has real world consequences. For my binary trans friends, being able to change their legal documents to have the correct pronouns and names was an incredibly validating and empowering experience.”

“I am completely denied this as a non-binary person.”

In Ireland, progress towards non-binary legal recognition has stalled in recent years. The current legislation, the Gender Recognition Act of 2015, uses language which excludes non-binary and intersex people from full legal recognition. This issue has been the source of multiple campaigns, rallies, and lobbying efforts. Non-binary identities are an everyday part of Ireland’s LGBTQ+ community, and yet there have been few attempts to enshrine their existence in the law.

For my binary trans friends, being able to change their legal documents to have the correct pronouns and names was an incredibly validating and empowering experience. I am completely denied this as a non-binary person

While Trinity has had a form of recognition for non-binary students since late 2019, the difficulty of having different pronouns or personal details in different institutions – workplaces, official records and so on – is another complication. Many students become trapped between conflicting documentation with no space for their identities.

Leah Hogan from Dublin City University (DCU) talks about their experience balancing the dangers of coming out publicly as non binary and affirming their identity in a livable way: “I didn’t come out as a non-binary student in college at first because I was concerned that there was so much transphobia that it would affect my education. Most of us are just out to friends because it’s just not safe to be fully out in college.”

“There are a lot of risks, including some towards our education and future careers. Right now, lecturers aren’t trained enough to handle our pronouns or identities in any setting as it is. They see long hair and think ‘girl’ and they see short hair and think ‘boy’. Things could be better if there was a bit more education in some format.”

However, Hogan has been sceptical about what recognition alone could accomplish without wider social change. “I don’t know if it’s possible to make a policy that will give trans and non-binary people their recognition in a way that they can be safely out to their lecturers. I’m not sure where it could effectively come from – there are a lot of rules by the college and the student unions that never really get looked at by the student body.”

Right now, lecturers aren’t trained enough to handle our pronouns or identities in any setting

“It’s hard to tell what spaces or colleges are trans friendly when so little is done to advertise what supports already exist.”

Hogan also feels that, in addition to not being advertised, many supports for trans students are contained to events like Pride week, leaving the needs of such students unaddressed for most of the year.

“We need more than a push at Pride week, such as year-long representation for all kinds of diverse students … They need to incorporate trans and non-binary people into the workplace because they’re the ones who are going to find ways to improve our experiences in third level education.”

Callum Kenny, the chair of DCU’s LGBTA society, has had similar thoughts about the position of Irish non-binary students. Talking about how his identity overlaps with being a student, he explains: “You have roadblocks in college anyway, but you’re not just facing roadblocks from college, you face them in regular life too. It’s never shut off.”

Recently, Kenny was the victim of a transphobic assault which affected his studies. “It caused a lot of issues with college. I had to defer modules, I wasn’t able to do college work for a solid two months which had a real knock-on effect.”

You have roadblocks in college anyway, but you’re not just facing roadblocks from college, you face them in regular life too. It’s never shut off

He feels that formal recognition of his identity by the college would have significantly helped him during this period, since it would likely be accompanied by better support structures specifically designed to help non-binary students. Without these supports, Kenny had to continue college while also balancing damages to his physical and mental health.

“[Non-binary exclusion] has more to do with ignorance than with malice”, he says. “[These identities] are not really discussed or taught if you don’t seek them out.”

Kenny also feels the root of legal and policy-related issues that non-binary students face are based in the inherent heteronormativity in college and government administrations. He specifically notes the process of changing personal details alongside gender identity in college digital learning platforms, and how conflicting documentation can often unintentionally out students or undermine their attempts at stating their identity.

You could just Google and find some answers, even to simple questions, because it saves us from having to do the work to explain ourselves

“For everyone, cis or heterosexual or both, you could just Google and find some answers, even to simple questions, because it saves us from having to do the work to explain ourselves.”

Through the work of activists like Elan-Cane, everyday students like Scott and Hogan, community leaders like Kenny, and their many allies, attention is being drawn to how non-binary people are mistreated and how societal and legal change is necessary to fully include and recognise them.

More people than ever have had the opportunity to find language for their relationship to gender, and they have also had more chances to safely express that relationship publicly. Colleges are slowly acknowledging and accommodating their non-binary students, but until full supports are implemented, such students will continue to face additional difficulties in their university lives.