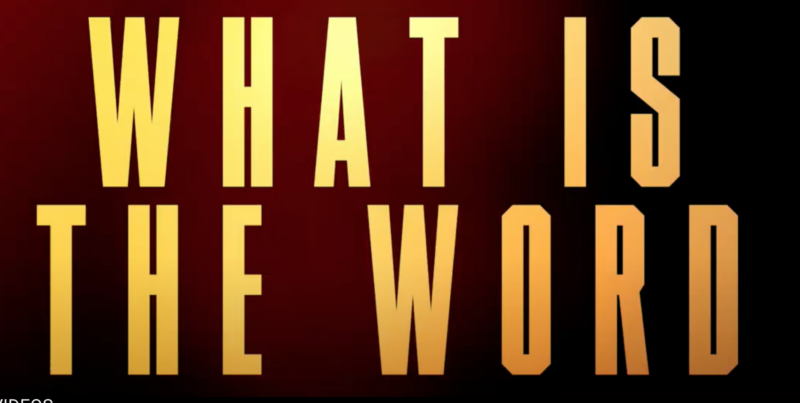 WHAT IS THE WORD, a new show by Pan Pan Theatre Company, surpassed traditional artistic boundaries with their bold mix of theatre and cinema.

Billed as an “audio cinematic experience”, the show offered a selection of Beckett’s poetry in both English and French. The production was performed in a cinema hall and used the vastness of screen, sound and space to create a unique collective experience. Despite prerecorded poems and socially distanced audience members, the sense of community was palpable.

The co-creators of WHAT IS THE WORD, Aedín Cosgrove, Ros Kavanagh,and Gavin Quinn, presented audiences with 11 diverse voices from some of Ireland’s leading actors. Though the language of Samuel Beckett’s poetry was poignant enough on its own, each performer enhanced and complemented it through intonation, pauses and tone. The words were accompanied by music and sounds, which in turn, danced against images displayed on a large-scale screen. This impacted the audiences in ways unforeseen by traditional theatre. It felt as if the density of Beckett’s text found its way into the world through the visuals presented.

Associate Professor of Drama at Trinity and dramaturg for WHAT IS THE WORD Nicholas Johnson encouraged the audiences to approach Beckett “with a sort of childlike eye” and openness towards “the fascination of the flavour of this language and the sound of it”. Describing his first encounter with Beckett’s work, Johnson recalled playing the boy in Waiting for Godot. Even at the tender age of 7, Johnson was still fascinated and amused by “the magic of two different voices interacting with each other”.

Most of what Johnson now knows about the role of a dramaturg he learnt in Germany doing research in the early 2000s. In the German context, a dramaturg plays a key role in the making of a show as “another intelligence in the room” – someone “who has the research expertise in the area under discussion” and is “able to debate and argue with the director, speaking for the meaning” of the piece. Pan Pan, with whom Johnson has collaborated for several years now, was one of the pioneers for bringing the German approach to Irish theatre.

For WHAT IS THE WORD, Johnson produced documents that discussed the origin of each poem and shed some light on their meaning. Initially the poems were meant to be part of a bigger project on Beckett’s radio play Cascando in 2016. The creators quickly realised, however, that the play was complex enough to stand alone. Jimmy Eadie, the sound designer for WHAT IS THE WORD, left the recordings “pickling” for several years to let them grow.

And grow they did. The outcome is something entirely inexplicable by any audience member. Despite attempting to process the meaning of the words, my mind and body were quickly entranced by the loud sounds and movements of the light. Having been to the cinema many times, never have I felt so shaken. The performance made me feel so many emotions at once – calm, trepidation, anxiety – but I could not put my finger on what exactly was happening. When the voice started speaking in French, it resembled a prayer in vain for me, until the show moved to the final piece, “What is the Word”. The moment of heavy silence after the final piece was over stayed with me even after the spell was broken by applause. Indeed, the creatives of WHAT IS THE WORD took Beckett’s text and, in Johnson’s words, “put these poems inside a person’s body”.

WHAT IS THE WORD is a Pan Pan production in collaboration with Cork Midsummer Festival, Poetry Ireland, Kilkenny Arts Festival, Irish Film Institute, and the Trinity Centre for Beckett Studies. It is supported by the Arts Council and Dublin City Council. It ran in Dublin at the IFI, August 24th-25th.