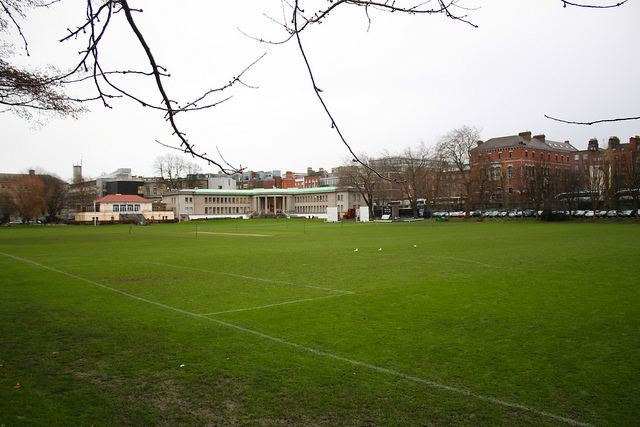 Dublin University Athletic Football Club (DUAFC) took on St John Bosco under the lights in Brickfield Park on Friday evening, in what turned out to be a disappointing result for the Trinity side, with St. John Bosco coming away as comfortable 5-1 victors in Division 1A of the Leinster Senior League.

DUAFC began the game on the back foot, with St John Bosco taking the early initiative and testing the DUAFC backline with some balls over the top. St John Bosco’s attacking tactics were clear to see in the opening minutes, with left full back Nathan Doyle pushing up to overload the right side of DUAFC’s defence and forcing Trinity right winger Danny McEvoy to be defensively-minded for most of the first half.

It wasn’t until 17 minutes in that DUAFC’s first chance of the match came, with James Kelly venturing down the left wing before being forced wide for a harmless shot against the side netting. As the first half continued, DUAFC found more success on the counter attack, with attackers Segun Balongun and Niall Carruthers displaying good dribbling and hold-up play to offer an outball to the busy defensive line.

St John Bosco took the lead some 40 minutes into the match, through left winger Jack Leoay after a shot from teammate Ephraim Lisimbio struck the post and fell fortuitously at the feet of the forward. There was little DUAFC goalkeeper Daniel Grace could do as the St John Bosco player hammered the ball in from close range.

However, with three minutes until the half time whistle, DUAFC scored a surprising equalizer against the run of play. Some excellent dribbling from Niall Carruthers earned DUAFC a free kick 25 yards from goal, with full back Sean Holland curling the ball into the top left corner with a spectacular strike.

DUAFC began the second half hoping to build on the stunning equalizer from their left full back. Within three minutes, however, a rough challenge on DUAFC attacking midfielder Niall Carruthers saw players from both sides lose their tempers, with DUAFC goalscorer Holland being sent off for throwing the ball at an opponent. Having made a big effort to get themselves back into the game, the Trinity side now faced a massive challenge to keep themselves in the competition.

It didn’t take long for St John Bosco to capitalise on gaps in DUAFC’s defence, with the home side going back in front through a short-range volley from Ephraim Lisimbio. The pressure on DUAFC’s defence rose as the second half wore on with keeper Daniel Grace making some fine saves to keep the away side in the game.

Despite some attacking substitutions, the Trinity team found little joy going forward in the second half with these changes also leaving DUAFC more exposed at the back, and it wasn’t long before these defensive gaps were once again exploited by St John Bosco. A great ball over the top by Shane Lawlor found the run of Ephraim Lisimbio who forced a great initial save by the DUAFC goalkeeper, but calmly slotted home the follow up finish with 15 minutes to play.

St John Bosco increased their tally for the evening to four, after a chipped ball in behind left the DUAFC keeper in no man’s land and forced to bring down an opposition forward inside the penalty box, with the penalty calmly converted by defensive midfielder Shane Lawlor. St John Bosco finished off the game in excellent fashion, with striker Ephraim Lisimbio grabbing his fourth of the match, with his sliced finish from outside the box looping over the unfortunate DUAFC goalkeeper.

Speaking to The University Times after the match, DUAFC manager Aido Fitzpatrick was frank in his assessment of his team’s performance: “Obviously we’re disappointed about the result … I was pleased with the application of the players, we were well in the game at 1-1.

“Unfortunately, the red card changed the whole course of the game. We struggled with that. It was 2-1 for quite a while. We made a couple of attacking changes to try and rescue the game. Unfortunately, it didn’t work, and it left us open at the back. I felt that there was no doubt that St John Bosco fully deserved to win the game, but I felt the 5-1 scoreline was a little bit harsh on us as well.”

With five losses in as many games to begin the season, DUAFC may struggle once more next week when they face off against league leaders Kilbarrack United on Thursday night.