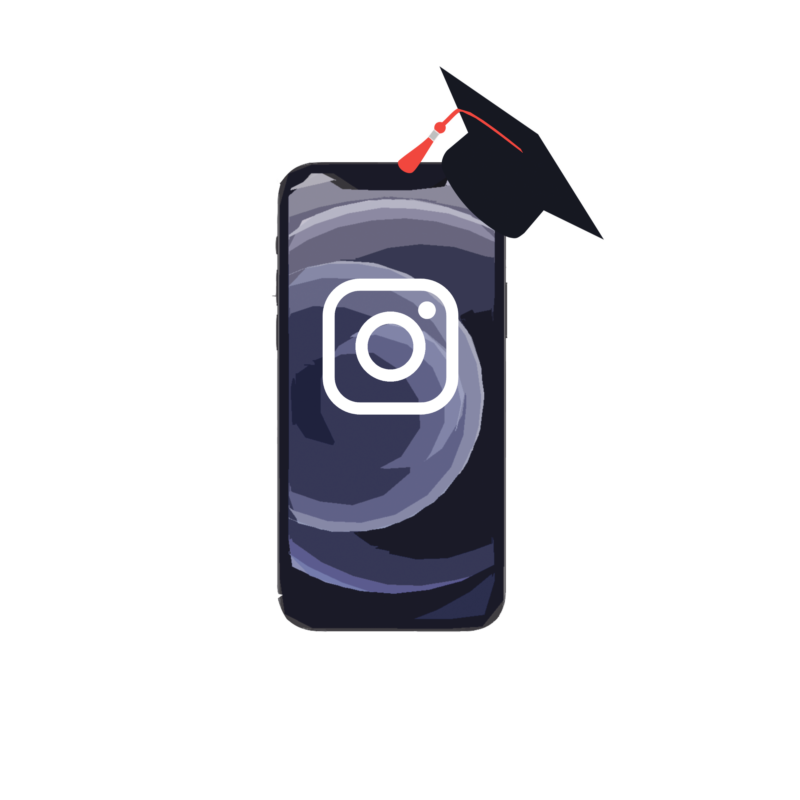 A complicated picture emerges when the structural foundations of academia – and academics themselves – are interrogated. With online microcultures constructed around the aesthetics of academia, the lives of postgraduates and doctoral students have become a subject of increasing interest. Yet, as PhD students share their research journeys online, their engagement with criticism, especially of the privilege and institutional isolation associated with academia, strike a refreshing tone.

As consumers of online content, we are sceptical of the boundary between authenticity and performance – especially in relation to product or lifestyle promotion. Although some larger accounts monetise from their online following on platforms such as Patreon, most PhD influencers are shielded from mainstream social media exposure. By sharing their research successes and shortcomings, they are fulfilling the growing demand for the kind of small online communities that populate Twitter and Instagram.

Laura Whelan (@phdwithlaura on Instagram) is writing her thesis on inherited blindness and DNA sequencing at Trinity. “I don’t think online communities are enough to address this issue. For me, nothing beats chatting with the people in your lab or in your department about how your week is going or went and what problems you faced or successes you had”, she explains.

Although the experience of academic isolation varies with the discipline, research environment and institution, Whelan explains that “it can be difficult, because sometimes if you’re the only person working on a very niche research project, you can feel like no one is going through the same thing or has faced the same problems”. Equipped with a support network including a roommate “who was also doing a PhD so we could celebrate and commiserate together” and a postdoctoral supervisor with whom she had a positive relationship, Whelan’s content revolves around her lab experiments.

She frames her decision to launch such an account within a larger network of academics on social media. Spurred by other PhD influencers, she explains that “one of the main drivers” of her decision to launch it, “was that I often get asked by friends and family outside of science: ‘What do you do every day?’, and I wanted to answer that question”.

Whelan emphasises that her followers react positively to posts illuminating the barriers particular to scientific research, including techniques to cope with unexpected results. “Experiments not working is a big one. Anyone in science will tell you that things just do not work a lot of the time and it can be really frustrating to figure out why.”

Various social media accounts offer levity, such as Lego Grad Student, an account that spans Twitter, Tumblr and Instagram, sharing cynical expressions of academic life through a miniature plastic toy. However, the close engagement between PhD influencers and their followers has met a demand for proximity within the domain. They offer one solution to mitigate the social solitude that is inherent for PhD candidates in many disciplines, especially the humanities.

Leonie Schulte (@theadolescentacademic on Instagram) is studying at the University of Hohenheim, Stuttgart, as an external PhD business student. For her, finding an online community was vital. “I don’t have much personal contact to the people in my department, to my professor or to other PhD students … it’s basically just me and my supervisor and it’s just way easier to reach out to people online, as opposed to in real life.” She explains that “people from my department that do a PhD don’t necessarily have Instagram, it’s not a social platform that academics typically use”.

if you’re the only person working on a very niche research project, you can feel like no one is going through the same thing

As a non-traditional PhD student balancing a full-time career in business management with her PhD, “my social life suffers”, Schulte says with a smile. “I’m working on two streams in parallel, career and education wise. And even if both are slower than they would normally be, I feel like in the end, it’s worth it.”

With a following of over 20,000 people on Instagram, Schulte shares resources and career tips, as well as delivering transparent advice about her struggle with full-time work and largely independent study. “It’s not always easy, because you basically have an 80-hour workload every week. There are certain methods that you could do like time blocking, and then some productivity rules and time management tools in general that I recommend [to] people. But also telling them: if you think you can do it, maybe think twice, because I thought I could do it and it honestly sucks sometimes.”

Annabelle Nwaokorie (@thephdstudent on Instagram), a PhD student at UCD in bioinformatics and systems biology in cancer research has over 16,000 followers. Positive reinforcement of the diligence required in academia, she explains, has played a chief role in fostering her online community. From sharing infographics about tuition costs to sharing extended caption advice about time management, productivity and motivation, Nwaokorie explains that her practical advice has resonated with her online peers.

For much of the time she spends online, Nwaokorie works to dismantle the misconception that undertaking the PhD process is a monolithic barrier that candidates must surmount. “I’m very positive about academia”, she explains. “I know there’s a lot of negativity about students being overworked and there’s a lack of the work-life balance, but I wanted to share a positive light on it to show that not everybody’s journey is the same negative route. That was my main motivation for starting my Instagram page.”

Central themes, she explains, have emerged from her sustained engagement on Instagram. “One question that always comes up, at least a couple of times a week is: ‘How do you stay motivated on days when you don’t feel like working or say you don’t get the right results you were expecting, how do you get up and continue working?’ And I always just say it’s discipline, it’s discipline over everything. But at the same time, it’s the passion behind the project.”

Nwaokorie attributes her interest in patient-public communications to her experience with content creation on Instagram, opening up a new career trajectory in science and communication. “It could even be an option for me for a career path after my PhD and if I didn’t start my Instagram, I wouldn’t even know there’s jobs available in science communication.”

Beth Webb (@_bethology on Instagram) is researching blood platelets in cardiovascular diseases at the University of Leeds. Starting her social media page exposed her to the breadth of experience from PhD candidates across the world, although initially not being sure what she could add. “It wasn’t until the first lockdown due to COVID that I started using social media to talk about my experience as PhD student as well as getting involved in outreach and science communication.”

Noting her unique perspective Webb said, “I wanted to share my experience as a first-gen PhD student, living with tinnitus during a pandemic. It gave me something to pour my energy into whilst things were so uncertain, and I was out of the lab for six months”.

If I didn’t start my Instagram, I wouldn’t even know there’s jobs available in science communication

Kimberly Fiock (@thepathphd on Instagram) is an experimental pathology student at the University of Iowa. “My field is largely unknown in the research world, even though a lot of scientists do some type of pathology research in one sense or another”, she explains. “I really wanted to bring awareness to how fascinating it is that we can physically see disease under the microscope.”

Overproduction trends, immense pressure and a dire absence of structures to support mental health in academia can lead to severe strain on the livelihood of academics. Today’s PhD students are provoking a reflection on the role that third level institutions play in propagating this culture. For many of the PhD candidates on social media, bringing their personal identities to this discussion, especially health experiences, is necessary.

Fiock’s decision to start a social media page offered her the opportunity “to talk candidly about mental health, and the difficult journey I’ve had finding acceptance in academia with bipolar disorder, OCD, and OCPD [obsessive compulsive personality disorder”. She says her followers mostly “relate to my struggles with mental health and finding a way to navigate the already mentally taxing experience of grad school on top of an existing mental health condition. And I get why. It’s something so prevalent but so taboo, and we really need to change that”.

“I think PhD support groups are a great way to combat loneliness. While online communities are amazing, they don’t always get you out of the PhD mindset”, Fiock explains. PhD programs can “do more in the future to normalise talking about isolation, rather than pushing a false sense of community onto new students. It’s important to remind students that it’s okay to feel lonely and to struggle”.

Impostor syndrome hit me fast and hard, so I felt I was not deserving of time off or help – that I somehow had to figure it out myself and suffer through it

Kertu Tenso (@kertutenso) is a PhD candidate in public health research at Boston University with almost 12,000 followers on Instagram. Originally from Estonia and a first-generation college student, Tenso emphasises that sharing the barriers to academia – and the possibilities to surmount them – is imperative.

“Impostor syndrome hit me fast and hard, so I felt I was not deserving of time off or help – that I somehow had to figure it out myself and suffer through it. That’s not a healthy way of dealing with these things, though.”
She explains that advocating for herself and sharing the “devastating effect” that the isolation and homesickness had on her mental health were a necessary step in her transition into the program.

“I found that talking about mental health in academia was somewhat of a taboo and those who struggled were seen as ‘not fit for academia’. In reality, most people in academia have struggled mentally at one point or another.”

Despite efforts to address the dearth of female graduates in STEM subjects, stigmatising and negative stereotyping persist at third level. “Most of my followers are young women, and I like sharing about challenges that I face as a young woman in STEM, so those kinds of topics often get a lot of feedback, as other women are facing similar challenges”, Tenso explains. “I’ve heard everything from wearing makeup and traditionally feminine clothes making a woman look ‘dumb’ in academia, to supposedly being admitted only because of our sex, not because we’re actually good. There’s still a lot of work to be done.”

I found that talking about mental health in academia was somewhat of a taboo and those who struggled were seen as ‘not fit for academia’. In reality, most people in academia have struggled mentally at one point or another

Although sequestered, academic support groups and integration or social events at the beginning of term are positive steps. However, such initiatives struggle to match the high and consistent engagement rates on social media: #phdstudent has been applied to over 380,000 posts on Instagram.

As the vast structures of academia fail to facilitate meaningful sociability and establish systems to support doctoral students, they have built online communities instead. Although these niche accounts are found at the peripheries of the online public sphere, their appeal is found in the proximity, engagement and meaningful discussion they can produce.