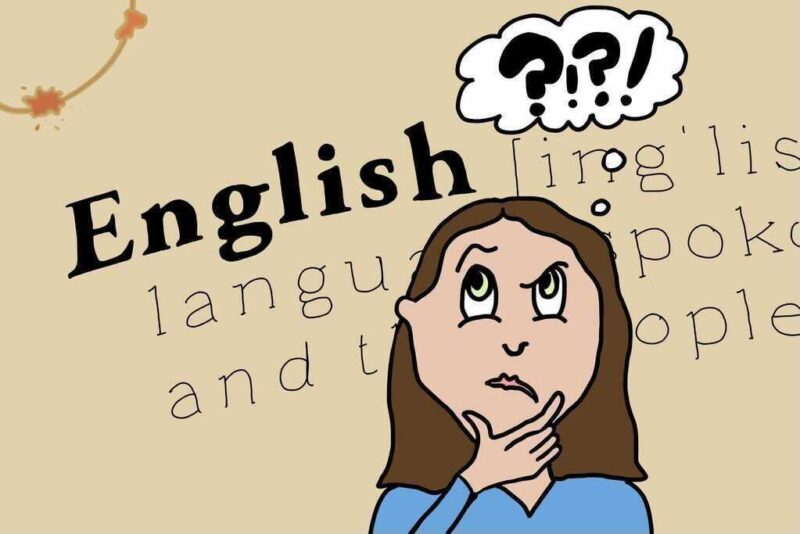 English learners know its rules are a rough ride to get through. It takes thorough thought throughout the day, enough to make many throw in the towel. They get winded by the winding exceptions, which by being so wound around have dealt learners many a mental wound.

The horror of English grammar is horrific, yet scrapping it all – which may seem a terror – would be terrific. It cannot be patched: to sew it together would sow seeds of disaster. But why, you ask, do I say so?

If you catch many fish while fishing, then you have a catch of fish. But God forbid you would hunt birds – you’ll have many geese, not many goose. Yet many sheep or just one go by the same name – it is badly baffling that “shoop” was never considered.

You may go sailing with a sail, boating in a boat, canoeing in a canoe, kayaking in a kayak, and rafting in a raft. But dare not assume all sea-faring adventures be so: rowing is done with oars and shipping most commonly in cars or planes. You ought to know yachts are similarly vacant from this trend.

It cannot be patched: to sew it together would sow seeds of disaster

These seemingly close-knit words have a knack for knotting up the language we know, enough to knock us all off balance for lack of knowledge. It is a most kniving construction, but nothing could nor would condemn English like its dumbfounding debt to the silent letter.

There is no rhyme nor rhythm for what to omit or why. In “queue” there is no cue to tell which letters are silent; “yolk” is similarly yoked down. Many other words deserve an honourable mention in all honesty, but to list them would take over an hour’s time.

Sadly, no mnemonic exists to remember these words: any that claim to are faux. There is no single rendezvous point for the students who soldier on in the war to learn English, nor for the courageous colonels who would lead them. Multitudes are left with a mere silhouette of pronunciation, unable to ascertain the necessary niche of each letter.

One must baulk at the aplomb of English speakers: to use the language as if subtleties of how we talk did not exist, to always write the right forms and only rarely succumb to error.

Our calm receipt of these letters is nothing less than a coup. Yet some letters, in rebellion to silence, claim the privilege of being written even where they do not belong. A thoroughly worse object of thought is the toughness of these inconsistent sounds.

Inconsistent use of letters is something to which we must not bow. To surrender to the confusion of this ambiguity creates a tension that is hard to resolve. Even a council would have difficulty constructing a concise description of these letters. I doubt even Confucius would be so wise.

you’ll have many geese, not many goose. Yet many sheep or just one go by the same name – it is badly baffling that “shoop” was never considered

These words beat and assault our hearts as a great bout of stormy weather. No better is the treatment from playwrights – their rites of writing are hardly right. Their troupes cast bout after bout of egregious words, full of flavour and colour but so devoid of honour.

How does one proceed? With no schedule for use, these cheap characters echo back and forth within the language to our chagrin. Gone is the golden age when spelling was a gem of gentle speech: now legions of gargantuan errors gain ever-greater gumption to commandeer the language.

Dare I, then, the ever-changing word order explore? Seen in books not, to dictionaries absent, it is only to poets and wordwrights known. The writing they would do, what they would write – what my them may be written, it varies in such complex ways unknown.

Seek you this to know, no? Or to this say no, no-one would know! RIght there you must stop – treacherous is the path forwards. By intuition clever be guided, or else lost: what person may delve into depths so dark, so unknown?

Yet speak we do still – speak everyday, word twist and orders unalign. Play twice we do in games of double meaning, then at the doubling laugh – now shall we trip over triples, or is it better a trip upon which such triple meanings we shall see?

A sin it must be, of poor tidings a sign – to a language so construct. I sigh and re-sigh, only to resign. What may be done?

How great a loss are the greyed-out pronunciation rules old, which being read and reread only leave you red with anger at each new read – and with redress none. The many tomes of grammar complex are of the issue an epitome: so much lost in wandering want, not one thing alone won when all else is done.

Yet sail onwards we must aboard these hardships, facing these bewitched bombshells which no balm can calm.