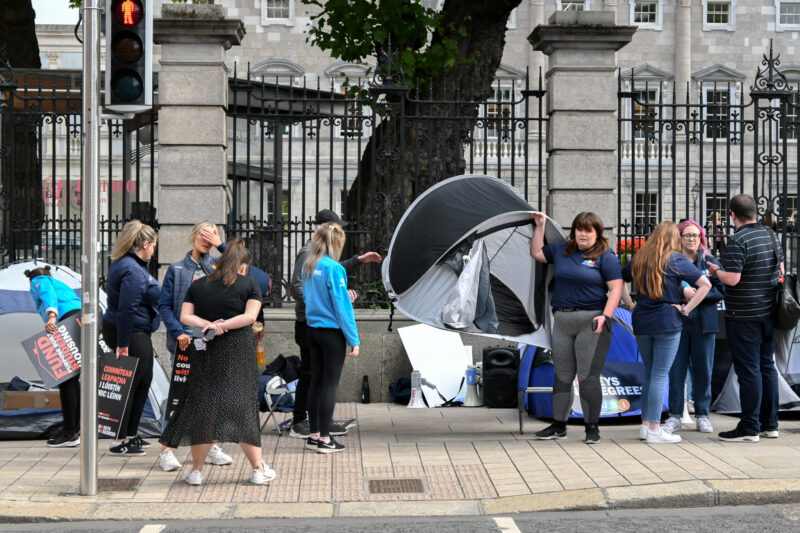 Members of the Union of Students in Ireland at a sleepout in front of the Dáil this week.
Emer Moreau for The University Times

The two main news stories at the forefront of student housing affairs this week appear side by side as a strange oxymoron. Firstly, the news that Dublin City Council granted permission for over 1,000 student beds to be offered as short-term lets this year. Accompanying this are grim accounts of a sleepout organised by the Union of Students Ireland (USI) outside the Dáil, protesting the crisis shortage of student accommodation.

The housing crisis in Ireland has been escalating for a number of tiresome years, affecting every cohort of the population either with immediate difficulty or with the grim prospects of how we will afford a home in the years to come. Our weary ears have heard every thinkable promise from the mouths of our leaders, while, quite like the news this week, the action and policy to accompany them has had quite the opposite effect.

So, how on earth does such a contradiction arise? The sleepout at the Dáil on Thursday night was prompted by sheer necessity. The issue of student housing came well and truly to a head this academic year, as student unions across the country reported being inundated with concerns from distressed students unable to secure affordable accommodation, or any accommodation at all. Reports of individuals deferring or dropping out altogether due to a lack of a place to live abounded. The scramble for housing is a yearly affair, but the late release of the leaving certificate results condensed the rush into a smaller space of time.

Providers of purpose-built student accommodation who are currently availing of the reported short-term lets rationalise the move by stating that they anticipated “the continuing impact of the pandemic on international and domestic demand for student accommodation”. Such a justification is wildly questionable, and one would be curious to know how much effort was made to confirm this dubious prediction before applying for short-term letting permission from Dublin City Council. It’s hard to believe that the claim was seriously questioned, given the fact that in 2019, the council permitted both DWS, which runs the Point Campus, and Global Student Accommodation to convert hundreds of student beds into co-living and short-term lets, as reported by the Dublin Inquirer. Both instances predate the coronavirus pandemic – so has this been the plan all along?

What student accommodation fails to provide, the private rental market offers no alternative given the extortionate prices which are well out of reach for most people, nevermind students. Purpose-built student accommodation, in theory, at least, was supposed to offer a practical solution to the shortage of student housing. Student housing should meet a few simple criteria to be effective: located near to the college, functional and affordable.

It baffles the mind, then, that much of the “purpose-built” student accommodation across the country is anything but fit for purpose. Luxury complexes dotted around the city boast modern, spacious flats alongside with frilly amenities like cinemas and bowling alleys. What they also come with, however, is a hefty price tag. As the Dublin Inquirer pointed out, the management of these complexes are not losing sleep over a handful of empty beds in their building: since these complexes are backed by large investment funds, so they can afford to not fill them. Students’ needs are not high up on the agenda. These companies speak only a language of growth and profit margins. To build fit-for-purpose, basic and affordable student accommodation is a meek endeavour that would fail to line their pockets. Rather, the lavish living spaces they have erected attract only the cohort of wealthier students and the comfort-seeking tourist.

There is still no incentive to lower rent prices as the monstrous investment funds can afford to keep them empty – holding out for the well-off client they are looking for.

The combination of a completely inaccessible private rental market and a student housing scheme that is miles off from being “purpose-built” has culminated in the accommodation crisis students are experiencing this academic year. New testimonies are emerging every day from students who have had to resort to couch-surfing, hours-long commutes and unsustainable stays in hotels and B&Bs (which are costing them a similar fortune).

Where is the government intervention to protect students’ right to affordable accommodation? Simply put, it is absent. Where the average student is backed up by unions and support from their peers, property developers garner the support of our government. The laissez-faire approach to student housing lets the luxury accommodation providers do what they want.

Tánaiste Leo Varadkar has recently made this modus operandi unashamedly clear. Earlier this week, in response to concerns raised in the Dáil of rising rent increases, Varadkar argued that “a balance” needs to be struck in regard to the regulation of rental costs as “one person’s rent is another person’s income”.

New testimonies are emerging every day from students who have had to resort to couch-surfing, hours-long commutes and unsustainable stays in hotels and B&Bs

I would, frankly, equate such a statement to an insult to all citizens whose work and worry is relentless in trying to afford housing in this country. Today’s story that one in four TDs are property owners or property investors themselves makes it clearer than ever: rhetoric such as Varadkar’s remark is indicative of those at the top looking out for their own interests.

We are a student population of ordinary people who desire only the basic necessities – accessibility to education and housing. We do not need nor want the luxuries of an upper-class utopia that the government seems to envisage.

TCDSU to Lobby for Timetables to be Published Earlier