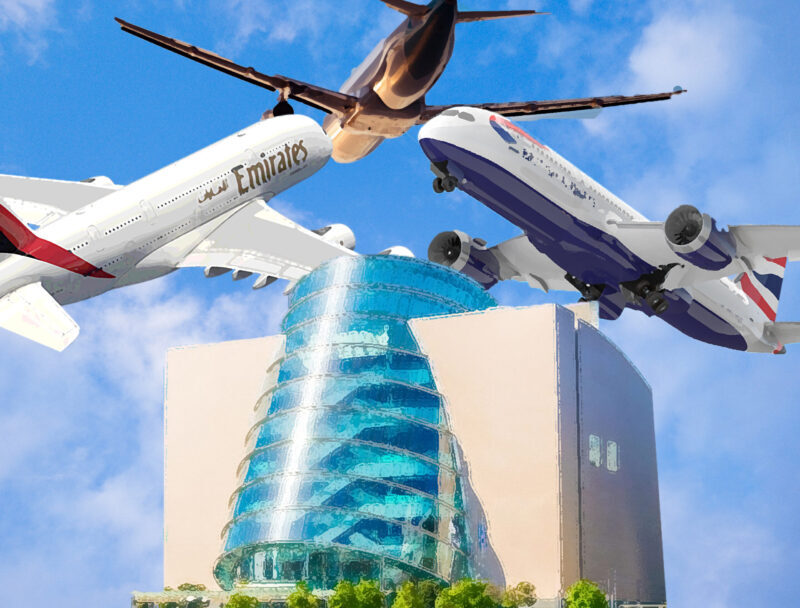 A group of physicists huddled over pints in a pub, dreaming up the next breakthrough in quantum mechanics. Two economists stealing half an hour in a conference hall corridor to bounce ground-breaking ideas off of each other. Conference halls packed with academics in holiday destinations like Hawaii or the Swiss Alps.

This is what many imagine when they think of academic conferences: a collection of intelligent people coming together in an idyllic setting to dream up future innovations and research breakthroughs.

But what this rosy image omits is the fact that, to fly there and back, a conference attendee could have emitted as much as three tonnes of carbon dioxide into the atmosphere. To limit global warming to two degrees, annual carbon dioxide emissions per capita will need to drop to 2.1 tonnes by 2050.

The definition of an academic conference has changed since the coronavirus pandemic forced them online – and climate change may make those changes permanent.

A recent study by Dr Sebastian Jäckle, a political scientist in the University of Freiburg, found that the maximum estimated greenhouse gas emissions for the online version of one of Europe’s biggest political science conferences were between 94 and 194 times smaller than the estimated emissions generated by an in-person conference.

To fly there and back, a conference attendee could have emitted as much as three tonnes of carbon dioxide into the atmosphere

But aside from moving fully online, Jäckle says there are plenty of ways to reduce a conference’s carbon footprint, such as simply giving people the option to attend the conference online, particularly for those coming from far-flung destinations such as Australians or New Zealanders travelling to a conference in Europe. Encouraging people to travel to conferences by land rather than plane is another option, he says.

His study also found that if a quarter of attendees at the conference – particularly those travelling long distances – opted for a virtual option, the conference could reduce its greenhouse gas emissions by 67 to 71 per cent.

“At first”, he says, “we have to have some kind of mind change that conferences online are really a normal thing”.

While many academics much prefer meeting in person – and look forward to moving away from online life – Jäckle says that it is important “to compare the benefits of meeting in person with the really bad influence on the climate”.

Making sustainability a part of conference organising has slowly creeped into the mainstream as concerns about climate change have become more and more prevalent.

Dr Caroline Levine, an English professor in Cornell University who studies what humanities have to offer in thinking about climate action, says that academics in her field have in recent years considered making meetings less frequent, organising “hubs” instead of just one conference destination to reduce air travel and using websites like gather.town to make meeting online more interactive.

Levine says that conference organisers “have actually quite a lot of agency. You do a lot of work, but you can do it better or worse, as far as the environment is concerned”.

Dr Ken Hiltner, an English and environmental science professor in the University of California, Santa Barbara, has taken the move to online one step further and in 2016 began organising “nearly carbon neutral conferences”.

As the name indicates, these conferences – which are solely online – emit a tiny fraction of the emissions an in-person conference does.

Nearly carbon neutral conferences take place over the span of weeks and include pre-recorded talks and presentations. Attendees can discuss and critique papers online via text at their own leisure, regardless of what time zone they are in, and at a fraction of the normal cost, allowing unprecedented access for academics in the developing world, as well as parents with young children, postgraduate students and people with disabilities.

Hiltner says that, for him, it is “as much a social justice issue as it is an environmental one”.

The latter concern may, in fact, be the best selling point for online conferences. A survey by Nature, a popular publication among academics, found that 74 per cent of researchers wanted conferences to remain virtual or have a virtual component and nearly half of respondents said that the most appreciated change as a result of the shift online was better accessibility.

Conference organisers interested in making conferences more sustainable may turn to the latest technology – such as VR headsets – to improve the experience, but Hiltner says that he is more interested in “yesterday’s technology than tomorrow’s technology”.

Meetings such as the American Geophysical Union’s annual conference give academics an invaluable chance to hobnob with each other, leading not only to great ideas, but also invaluable career opportunities and grants

“That’s what’s installed across the planet. There are some institutions where the computers they have are maybe a decade old, or where they don’t have the high-speed, fibre bandwidth.”

Holding meetings online also means that institutions that previously lacked the money to host conferences now have the option to do so – all conference goers need is a smartphone.

“We’ve had people take part in these conferences and do it entirely from their phones”, Hiltner says. “They actually recorded the talk with their phones, and then did all the back and forth on the phone too.”

So far, however, the progress in making conferences more sustainable has come as a result of necessity.

She believes that the pandemic has “made people in my community aware that other formats of convening and knowledge sharing are possible”.

For example, after moving solely online last year, the American Geophysical Union’s annual conference, which hosted 28,000 people in 2019, will this year adopt a hybrid model, where attendees can travel to the in-person event in New Orleans or attend online.

A recent study found that if the American Geophysical Union’s conference went fully virtual, it would wipe out 99.9 per cent of its emissions, almost the same amount as the total emissions generated by the city of Edinburgh in a week. If the 36 per cent of people flying in from outside North America attended virtually, there would be a 77 per cent drop in emissions.

Roop says of a hybrid model that “more and more people will be adopting it both out of concerns about health, but increasingly concerns about sustainability”.

Let’s be clear: not considering climate change when planning conferences is very much a form of climate denial

This future direction of conferences will be particularly important for academics in the early stages of their careers. Meetings such as the American Geophysical Union’s annual conference give academics an invaluable chance to hobnob with each other, leading not only to great ideas, but also invaluable career opportunities and grants.

Conferences are also a major industry and can cost hundreds of euros to attend. If thousands of people attend, between flights, accommodation and food, conferences generate a lot of money for companies, communities and organisations, as well as creating jobs and giving a boost to local tourism.

They also offer academics a chance to interface with industry, examine new products and technologies in person and take tours of facilities – all of which is a great way to spread information and improve links and the flow of information between the private sector, government and academia. Scrapping all of this and going fully online may not be feasible or constructive.

However, the sheer number of flights that the old model of conferencing generates seems increasingly untenable, even when weighed up against the benefits of in-person conferences. Peter Kalmus, a NASA climate scientist and founder of No Fly Climate Sci, tells this newspaper in an email: “Let’s be clear: not considering climate change when planning conferences is very much a form of climate denial.”

Kalmus adds that “things are already so hot on Earth from burning fossil fuel, that our academic flying can no longer be justified”.

“As more and more people adopt this stance, it will gradually revoke the social license of the fossil fuel and aviation industries (two sides of the same coin, supply and demand, production and consumption)”, he says. “Revoking this social license for the entire fossil fuel sector is a prerequisite for ending it.”

The pitfalls of switching to online or hybrid conferences may appear insurmountable, but, as Hiltner points out, 100 years ago academics were not jetting around the globe going to conferences. Flying to conferences, he says, is “a culture that emerged”.

“Now people feel very comfortable with it, but it’s just one of many possibilities of how we can do this. It just happened to happen because of air travel and it becoming inexpensive.”

As the pandemic comes to a close, academics will grapple with the forces in their profession that hanker for a full return to what is comfortable, and those who want to look to a different, more sustainable way of conferencing.

But the conversation to the problems academics face will not, as Roop says, be “straightforward” and descending into dialogue about “sacrifice” could discourage people.

“I, of course, come from the community that’s been raising the alarm bells about this issue for a long time”, she says, “and we’ve been criticised ourselves for travelling for fieldwork and travelling for research and of course, we all have a carbon footprint”.

“But we can all think critically about how to make a contribution to the solutions, recognising that it’s both individuals and systems, predominantly systems that we rely on every day, that need to be a cornerstone of the scalable solutions that are going to help us confront this challenge.”

There are solutions aplenty to the challenges of conferencing and a lot of different voices designing new ways of doing things in light of the pandemic. This is fortunate: after all, there has never been a more opportune time to put sustainability at the centre of the academic conference circuit.